Vampire Survivors isn't the kind of game I usually play, but it got some buzz a while back and it was available on PC Game Pass, so I thought I'd try it out right after Christmas:

If you're not familiar with Vampire Survivors, it's a pixel-art action roguelike where you walk around a stage and your weapons automatically fire and you are swarmed by enemies and you have to try to survive. Killing enemies drops gems which you pickup to gain experience, which lets you get new weapons, passives, or upgrades. Each run starts off a bit slow but towards the end of each stage (usually 30 minutes in), it becomes a insane manic rush of flashing lights and damage numbers and hoping you built up enough DPS to hold off the swarm long enough.

Apparently the main developer on this game used to work in the gambling industry, which explains the annoyingly-long slot-machine-like sounds and animations that happen each time you open one of the treasure boxes dropped by bosses.

I found myself enjoying the game even though the when I tried it out the game didn't look like it had a lot of production quality and the gameplay didn't feel that special. I kept playing mostly because it turned out to be surprisingly deep. There's an insane amount of achievements and unlockables (142 achievements, each corresponding to an unlock). There's a lot of weapons and passives to unlock and evolutions and unions and whatnot. There's also a large variety of characters to pick from (that you also need to unlock). And many, many secrets! I am quite happy I did not to get all those secrets for achievement completion because some of them seemed quite tedious.

I powered through the last few days because frankly the game was quite distracting because whenever I had free time to do other things I want to do I'd often find myself just doing a few runs of VS instead. I completed the base game in a bit more than a week, playtime around 31 hours. (HLTB has completion average at around 37 hours, so I did fairly well.)

It's hard to over-emphasize how insane the game looks in motion, so here's a YouTube playlist. And of course, my traditional screenshot dump will be attached to this post.

In conclusion: There are no actual vampires in this game (because they are the survivors?) but the game itself can be considered a vampire that sucks your time away for just one more run. 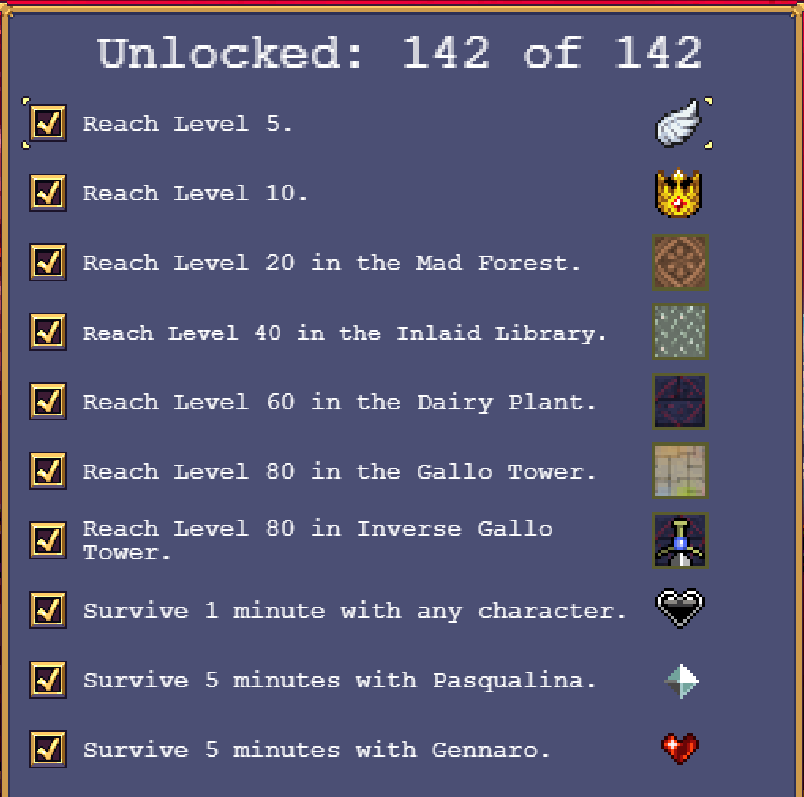 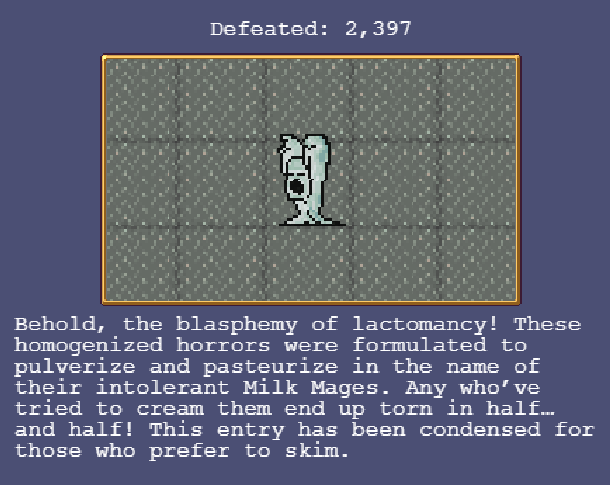 Some of the flavor text is hilarious though.