Today I finished Paradise Killer, which is the first game I finished on PC Game Pass, which I subscribed to three months ago. That's not a great rate, but my first three months were free due to some promo, so whatever.

Paradise Killer wasn't my first choice of game to play on Game Pass though, I had a few other games I had wanted to play first, but it turns out the XBox app needed to play PC Game Pass games is super wonky and gave me a lot of problems. As I mentioned in a previous weeknotes, I had problems with downloading and installing games and cloud sync wasn't working and I always had to play offline. The app also keeps needing me to sign in every time and didn't even track my playtime, so now I can only guestimate how long it took. The XBox Game Bar overlay, which you use to view screen captures and such, seems super slow and doesn't immediately reflect new screenshots I take. (I also didn't figure out how to use it until late in the game, so I didn't get more than a few screenshots.) PC Game Pass is great for the price, but the XBox app leaves much to be desired before it can be considered a decent competitor to Steam.

As for the game itself, it's kind of a weird one and totally not what I expected. From the game description I thought it was going to be a narrative-focused game (maybe like the Ace Attorney series) about a murder that happened on like an island cruise or such. Turns out it's about a pocket dimension populated by immortals who have enslaved citizens in order to design and build an island that will let them resurrect some kind of eldritch gods. I was waaaaay off!

And instead of a narrative focus, it's actually a first-person open-world 3D platformer with a focus on finding different collectibles throughout the island. Some of those collectibles will be the evidence you need to uncover the truth behind the crimes committed by the titular Paradise Killer. When you're dropped into the world, getting around can be challenging, as the island's layout can be confusing, making you run and crawl and jump across high apartment buildings and temples and diving into sewers. There is a high-level map in the menu, but other than that, there is little to stop you from getting lost; you don't have anything like a minimap or even a compass while moving around. A lot of collectibles are also in challenging places to reach, so early on you're going to see a lot of items that you have no idea how to get to.

Another concern I had for those starting out is that you are told that the currency of the realm is these blood crystals that are scattered around the island; they are also a collectible. Since they are a collectible, that means there is a limited number of them on the island, and when you run into an opportunity to spend them, you don't know whether it's something important or something frivolous and you might get scrwed later if you run out of blood crystals. For the record, it is unlikely to run out; I had around 40 blood crystals left after completing the game, having collected everything and even after spending a bunch for fast travel.

If you'd like a hint as to what the important things to buy are:

For the part where you investigate the crime(s), it's pretty straightforward; you are given a magic computer that records all the clues and evidence you find and you can talk to all the suspects and if you collect everything anyway, you should uncover everything you need to find out the truth at trial. You can actually skip all the gathering and collecting if you like and just immediately start the trial at the very start (there is an achievement to speedrun the game in 10 minutes!), but you miss out on a lot of story if you do that. I was a bit worried about going into the trial as I still didn't have a complete picture in my head of "the truth", but as long as you've collected everything and make reasonable accusations, everything will come out in the end.

I found the 3D art/models nothing to write home about, but the 2d graphics (used for the characters and during conversation, etc) and character designs are pretty good. The story and the mystery and the crimes were good, and most of the cast of suspects had good backstories, and you may even come to regret having to do your duty in the end. I did find myself getting dizzy from the 3d platforming if I played for too long, but that's probably just me (that or I need to optimize my graphics or something.)

I was able to do completion for this game, although once again the XBox app's achievement updates leave a lot to be desired. There is no popup or anything when an achievement unlocks, you have to go into the XBox app's menu to see which ones you've unlocked, and they don't always update immediately. How Long To Beat says the game is about 15-20 hours long, but I think my playtime was closer to 20-25 hours or maybe more, over a bit more than 2 months real-time. I think I took a long time mostly because at the start I got lost a lot and didn't know what was important to spend crystals on early.

Overall: A pretty good mystery game + a decent 3d platformer. Super weird and creepy story. Excellent characters. I ended up writing more words about it than I expected.

Next up: I think I need to spend some more time trying to iron out my issues with PC Game Pass before trying another game via the XBox app. I had suspended any tinkering once I got further along with Paradise Killer because I don't think my data was being synced to the cloud and I didn't want to lose any progress. 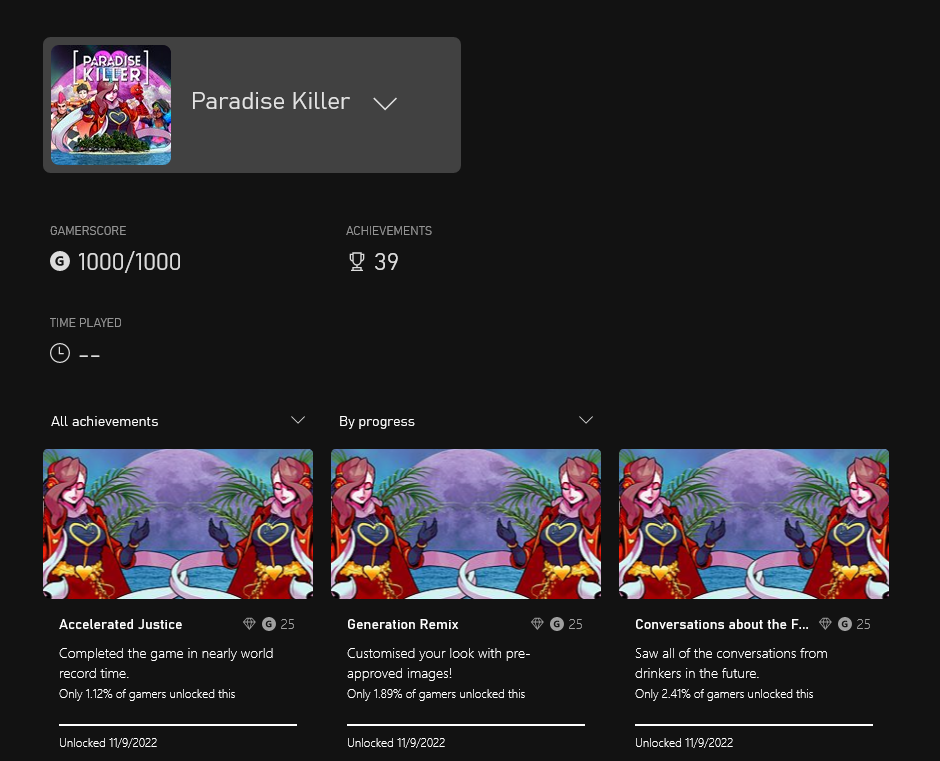