Met up with my oldest friend group yesterday to play boardgames and MTG in honor of a friend who passed away. Some notes on the games we played:

Cosmic Encounter is a fun little space game where the goal is to put your ships on enemy planets, either through attacks or negotiations. Each encounter is relatively simple and resolves quickly; you choose a target and you either fight or negotiate, and each player plays a card to further that objective. Spicing it up is that each player is assigned a special power which is hidden at the start of the game and usually quite busted. We played two games, with 3 players and 4 players respectively. I tied the first one and won the second. The two special powers I played were Oracle (forcing my opponent to play their encounter card face up before I play mine) and Clone (I get to keep instead of discard whatever encounter card I play), and I don't even think those were the best ones of the games I played. 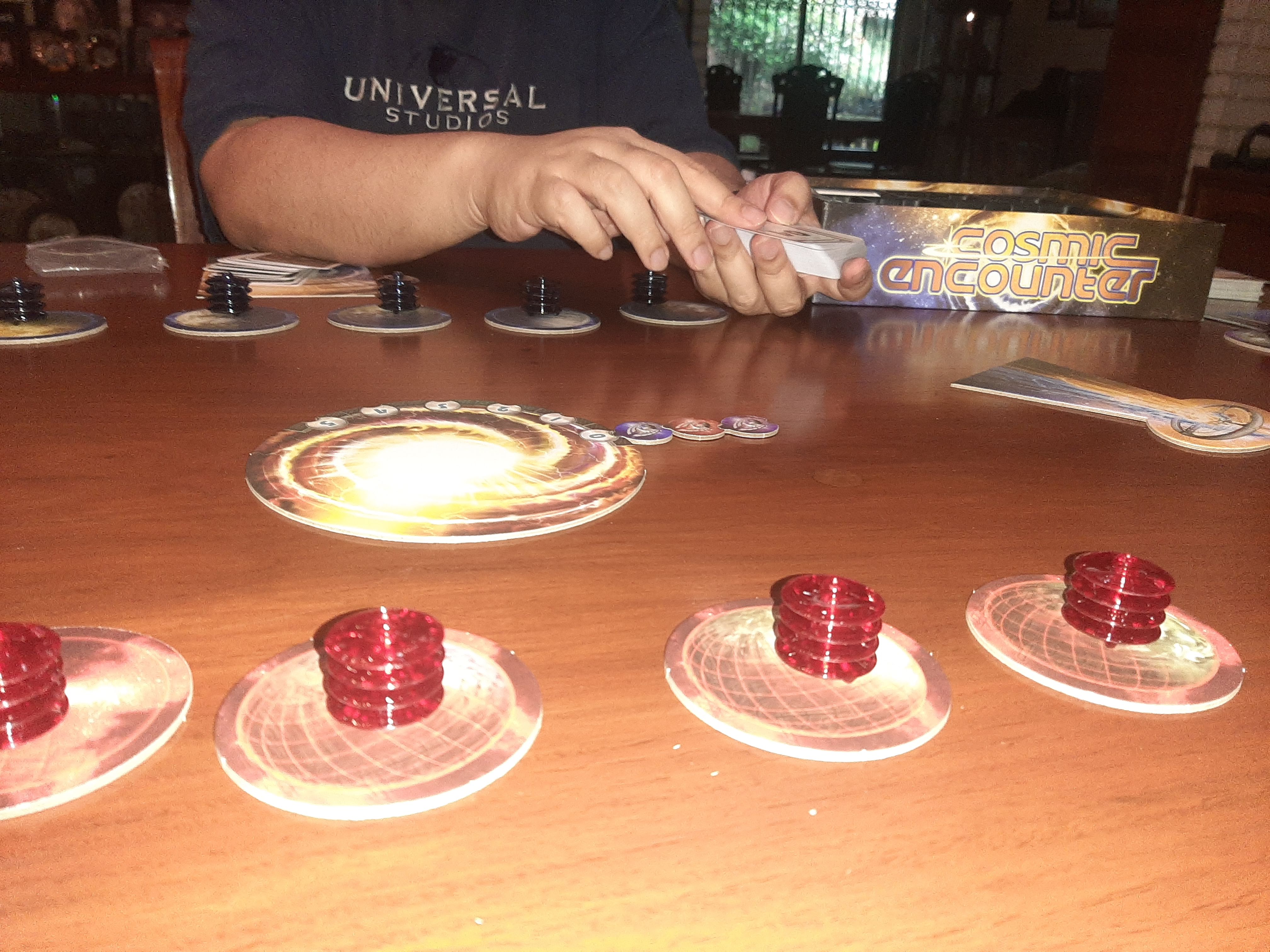 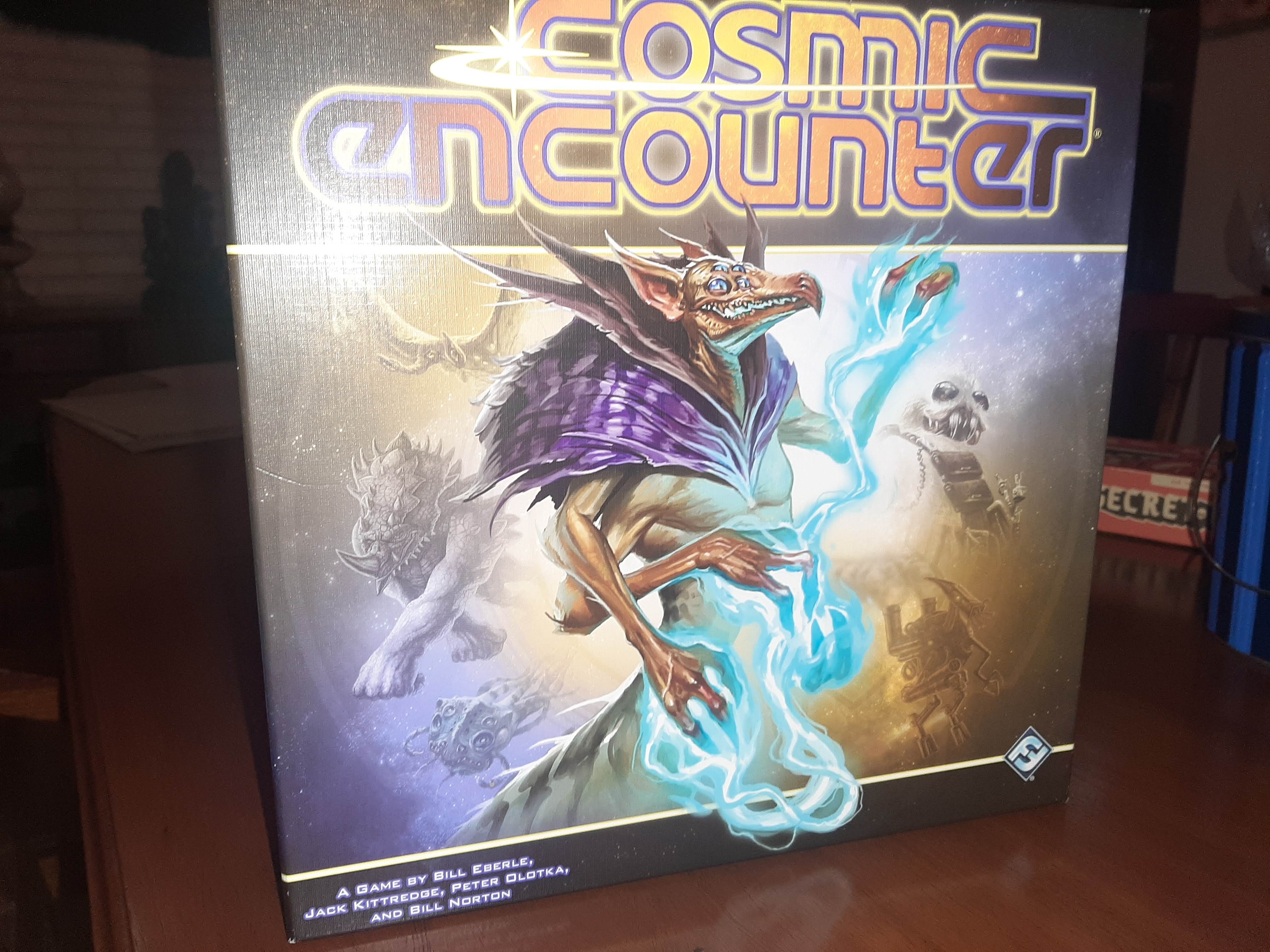 Secret Hitler was the most played game of the night, I think we managed 5 or 6 games, initially with 6 players, but another friend joined us so the last 2-3 games were with 7 players. Secret Hitler is a werewolf variant where the players are all either liberals, fascists, or Hitler. Each turn, there is a president (position rotates) who appoints a chancellor, and everyone votes on whether they accept this government. If the vote passes, the president and the chancellor pass a policy, which can either be liberal or fascist. Liberals win after so many policies, and fascists get to do meaner things and eventually win as more fascist policies are harder. The deck has a limited number of liberal policies, so it gets harder to pass them as more are used up. Liberals can also win if they manage to kill Hitler (ironically via passing a fascist policy) and fascists can win if they manage to get Hitler appointed as chancellor. The game actually reflects real-life in a lot of sad/funny ways. I won once as Hitler, and once each as a fascist and a liberal. 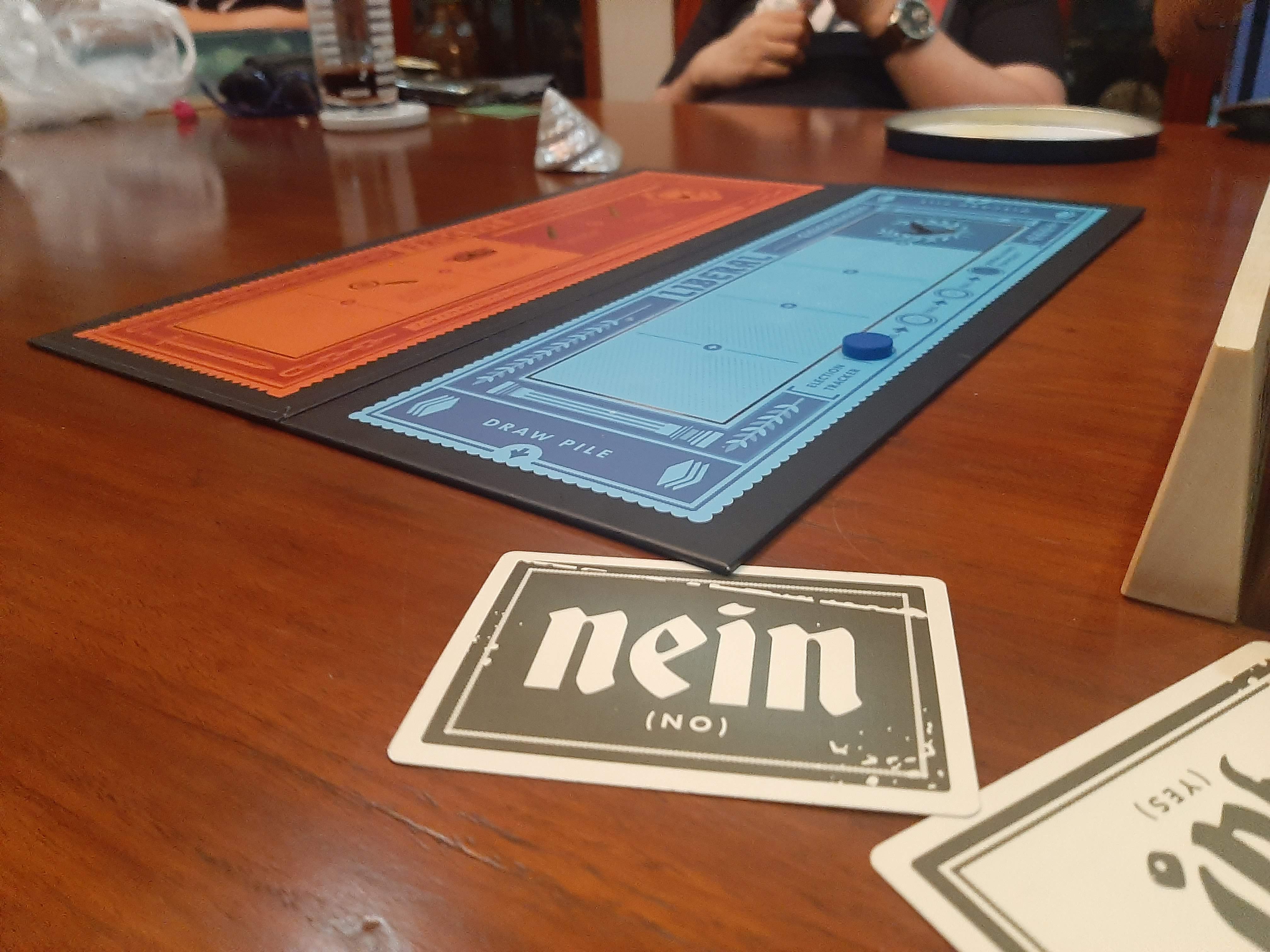 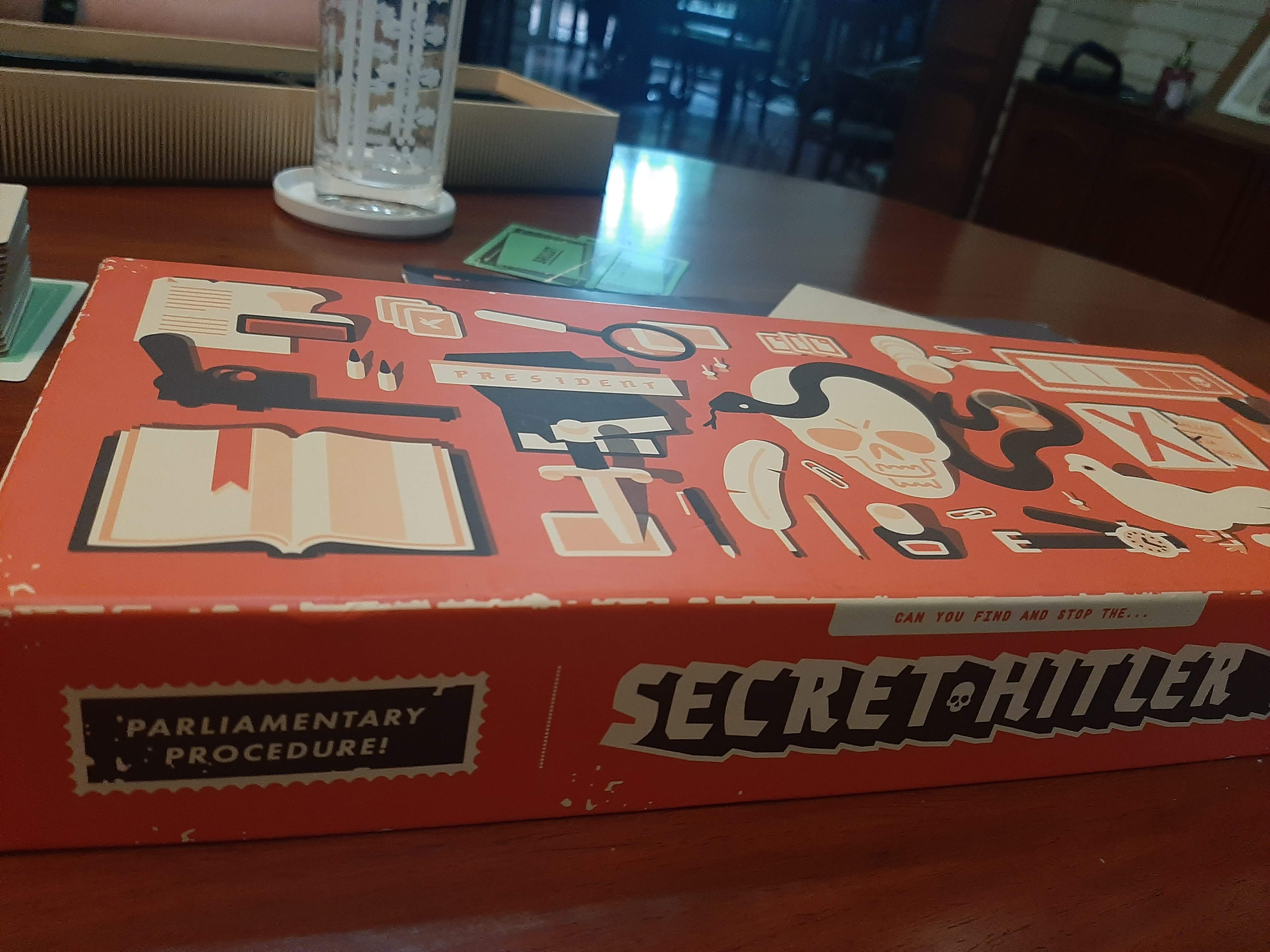 Libertalia is a pirate-themed game for up to 6 players, we were able to play with the full set. In this game, we play a bunch of pirate ship crew members with the goal of being the richest in the game. One game consists of three weeks, with each week being a pirate mission where you collect booty. Each round players are given a set of characters they can play; the set is the same for everyone. Each day of the week, each player decides which character to play for that day. Higher ranked characters can choose their booty first, while lower ranked characters are often stuck getting booty items that are bad for them. Each character also has special abilities that can trigger during the day or the night or at the end of the week. Once the week ends, each character's total money (doubloons) is added up and the player is moved up the score track, and a new set of characters is dealt for the next week (you keep any characters that you didn't play in the previous week). I was very bad at this game, often using my character abilities way too early or inefficiently, and ended up dead last in the one game we played (I am the blue token in the score track image below). We decided to draft Unfinity because everyone in the group had played Magic at some point and our friend who passed was a big fan of Unsets. This turned out to be not a very good idea, as the set isn't great for people who hadn't played Magic in a while, with many of the cards being super wordy. Many of the mechanics like stickers etc were also super fiddly. We ended up using up too much time to draft and it was almost dinner time when we were done and after dinner some people already had to go, so we didn't end up playing any of the actual games. I myself am not a big fan of Unsets; I think I've only ever played the original, where the only thing I remember is that the aforementioned friend made me do the hokey-pokey! I still tried to do "deck construction" for my pool though, pictures below. Ended up in at least 3 colors and probably need to cut some stuff. 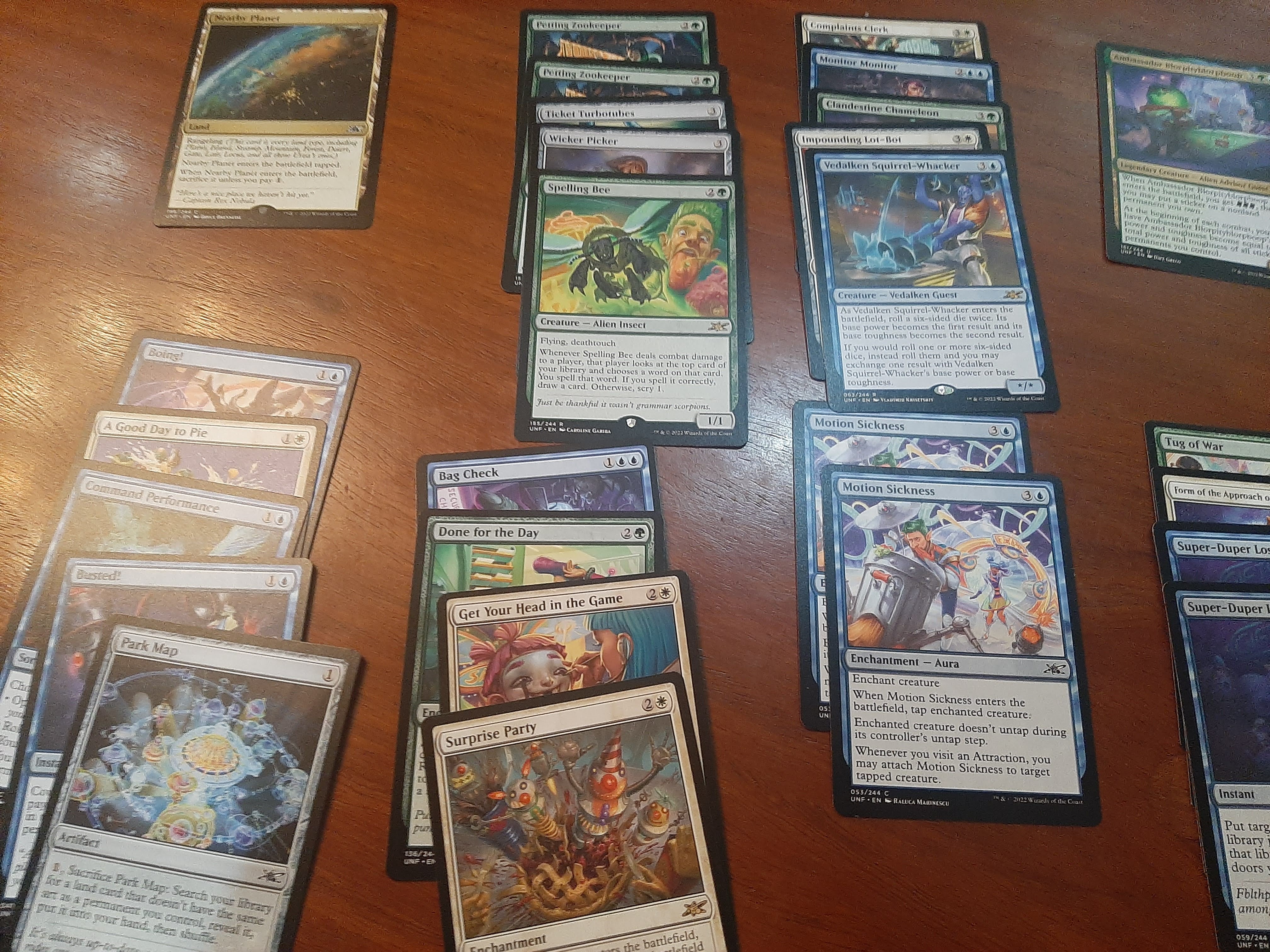 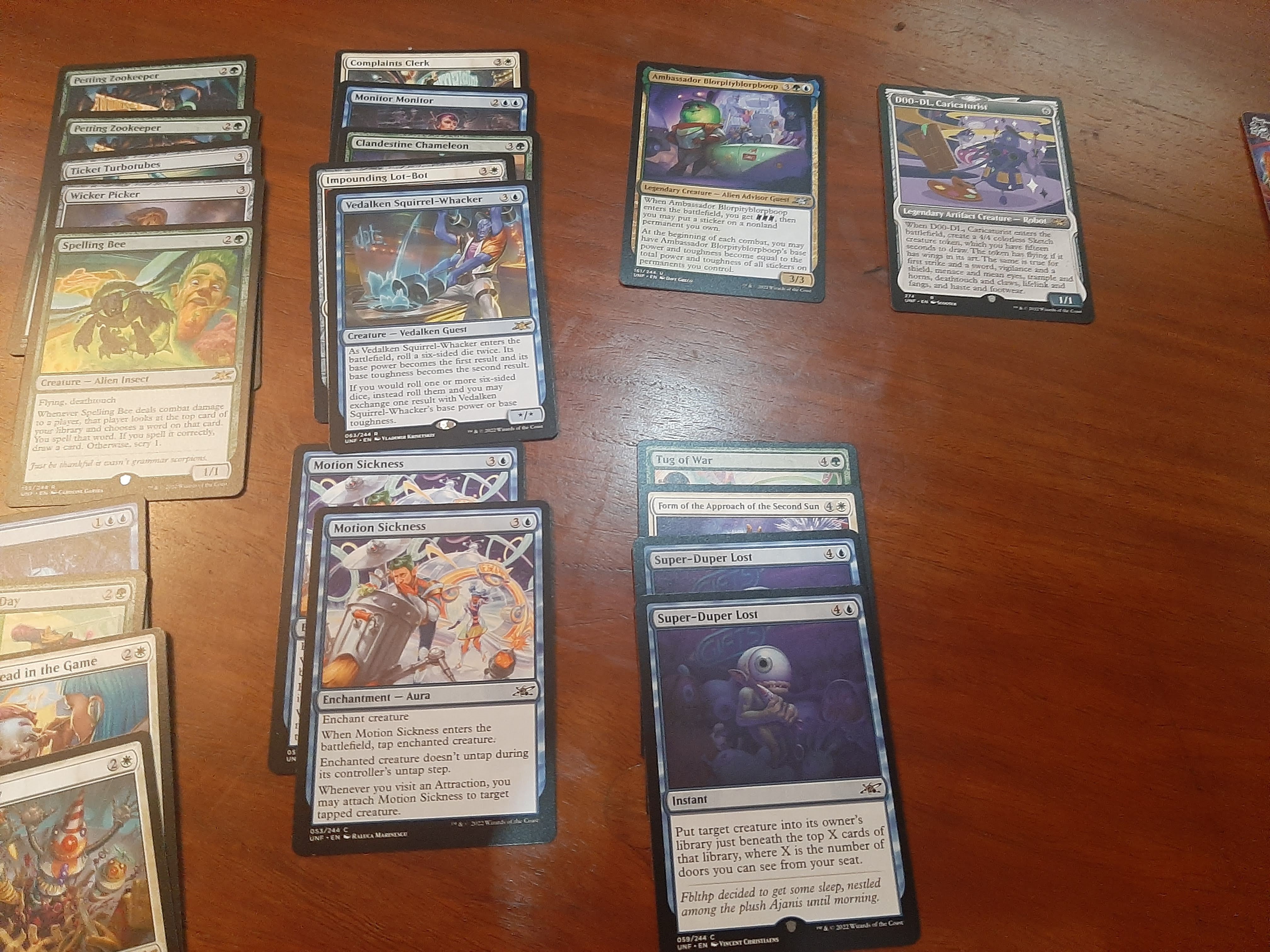 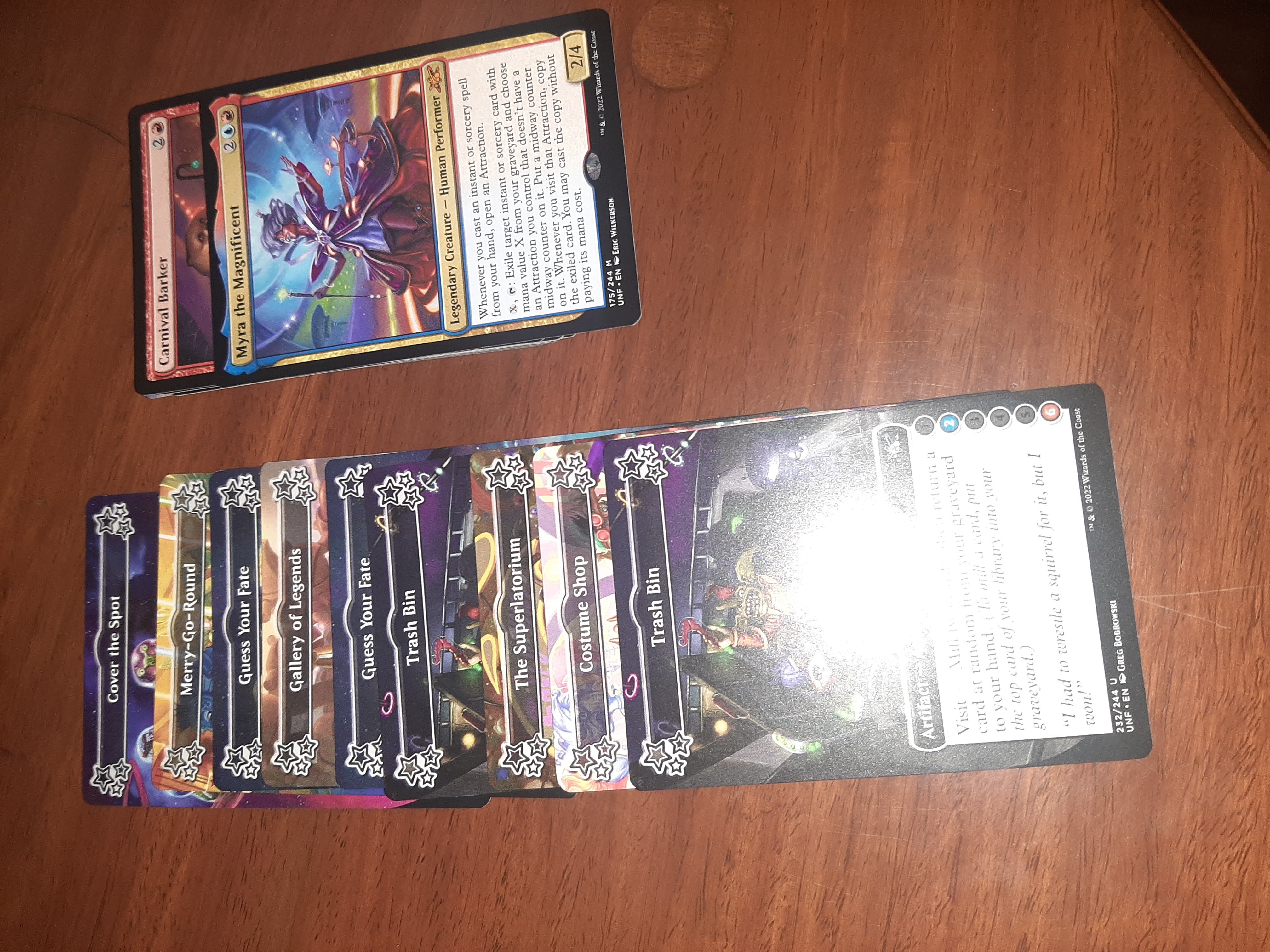 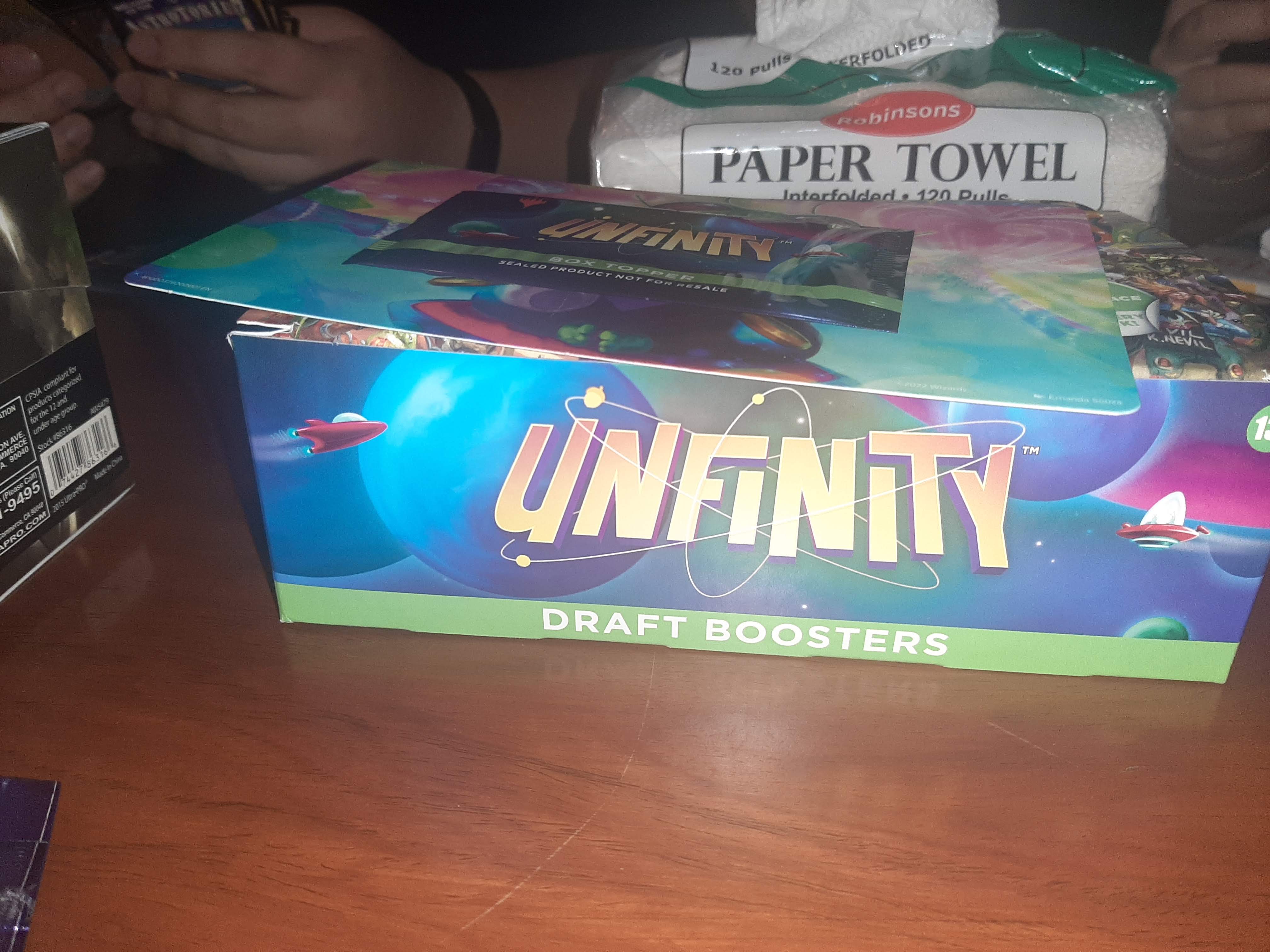 We decided to play one more "quick" board game with 5 people. I've actually had the digital version of Wingspan on my Steam wishlist for a while. It's a game of bird collecting. The explanations took a while, but the game actually plays out fairly straightforwardly. You have a hand of bird cards with different stats and abilities. The game has 4 rounds with limited number of turns. Each turn you can either play birds onto your board, gather food (needed to play birds), lay eggs (scores points and pays for some costs) or draw cards. Other than "play birds", the other actions can trigger special abilities of birds already in play, and there are some engine shenanigans you can get going if you draw and play the right birds. Each round also has a bonus objective like "most eggs in this area" or such, where the highest scorers get additional points. Each player also has a secret bonus objective for even more points. The game is non-confrontational; that is, you don't interact directly with other players, other than competing for points. I can't have my birds attack someone else's birds for example. At the end of four rounds, there's a bunch of points added up from different factors; some birds are worth more points than others. We only played the one game which actually took the better part of two hours I think. I ended up tied for 3rd/4th (see scoresheet below), which I think is pretty good for a newbie who didn't really understand everything from the explanation at the start. (The winners who tied for 1st/2nd had actually played the game before.) 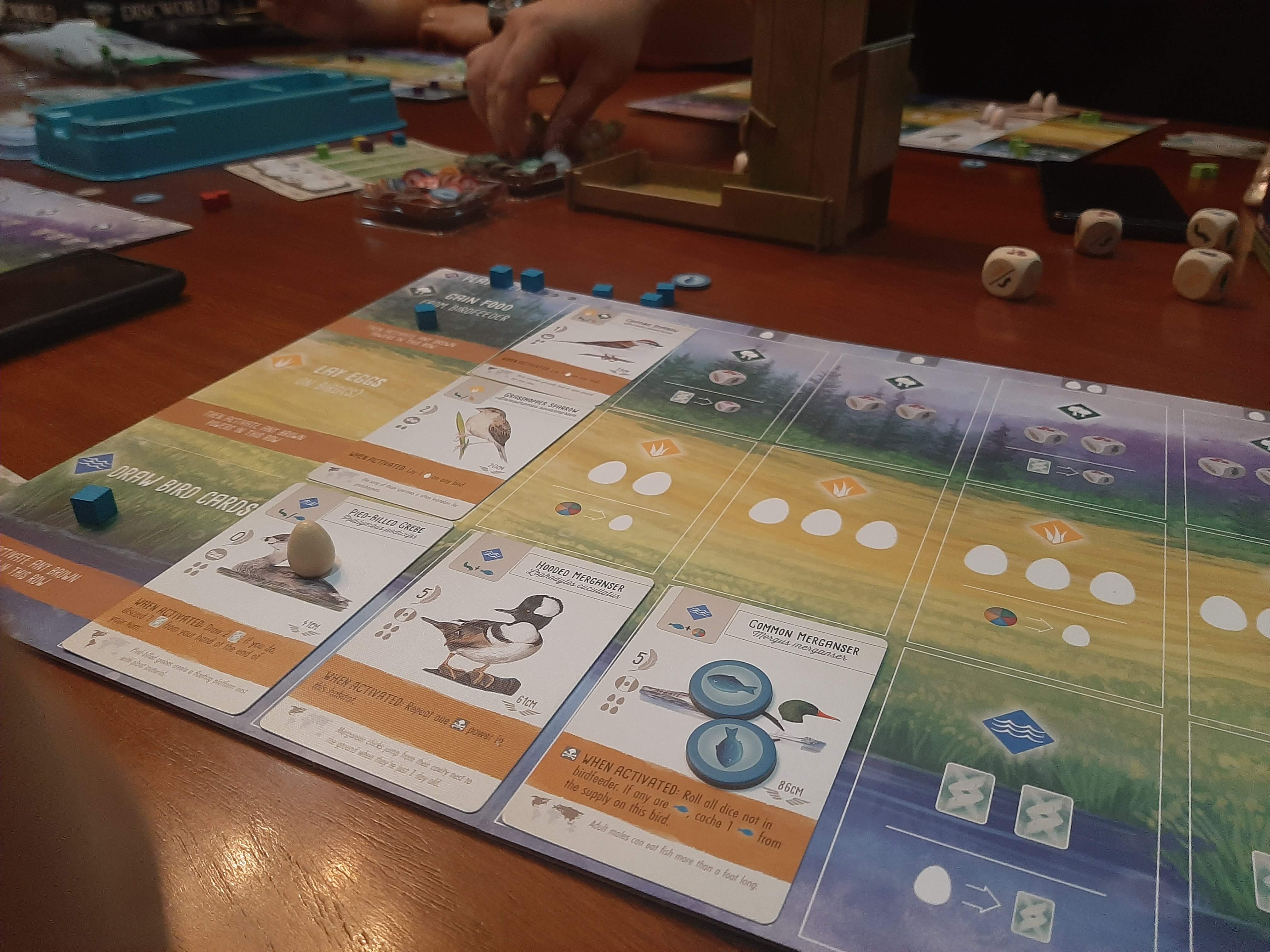 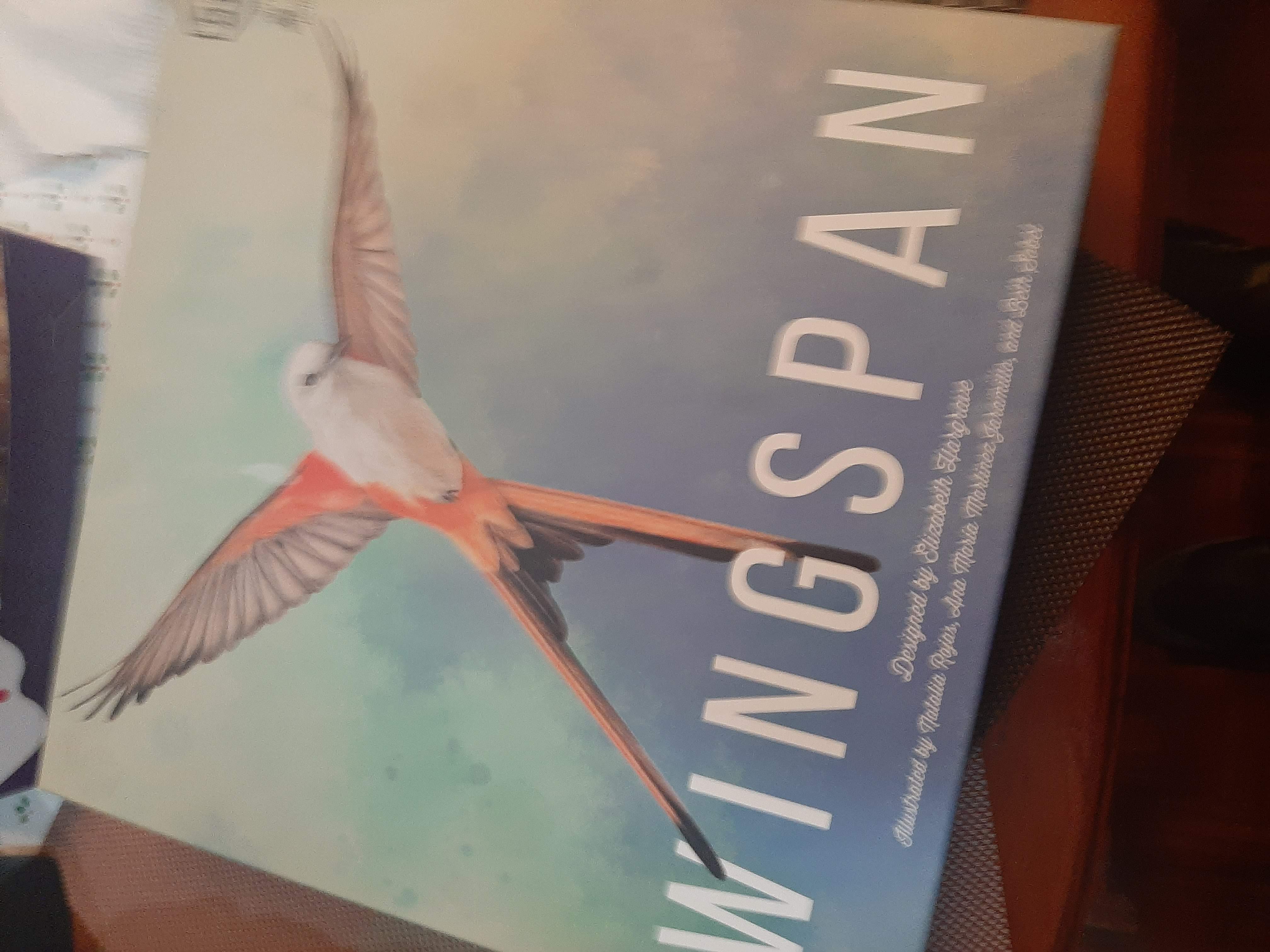