Finished my second big RPG for the year! Triangle Strategy by Squaresoft is a new "spiritual successor" to one of all-time favorite games, Final Fantasy Tactics.

As usual, I end this entry with my plethora of screenshots. Fair warning: Some of these should be considered spoilers! 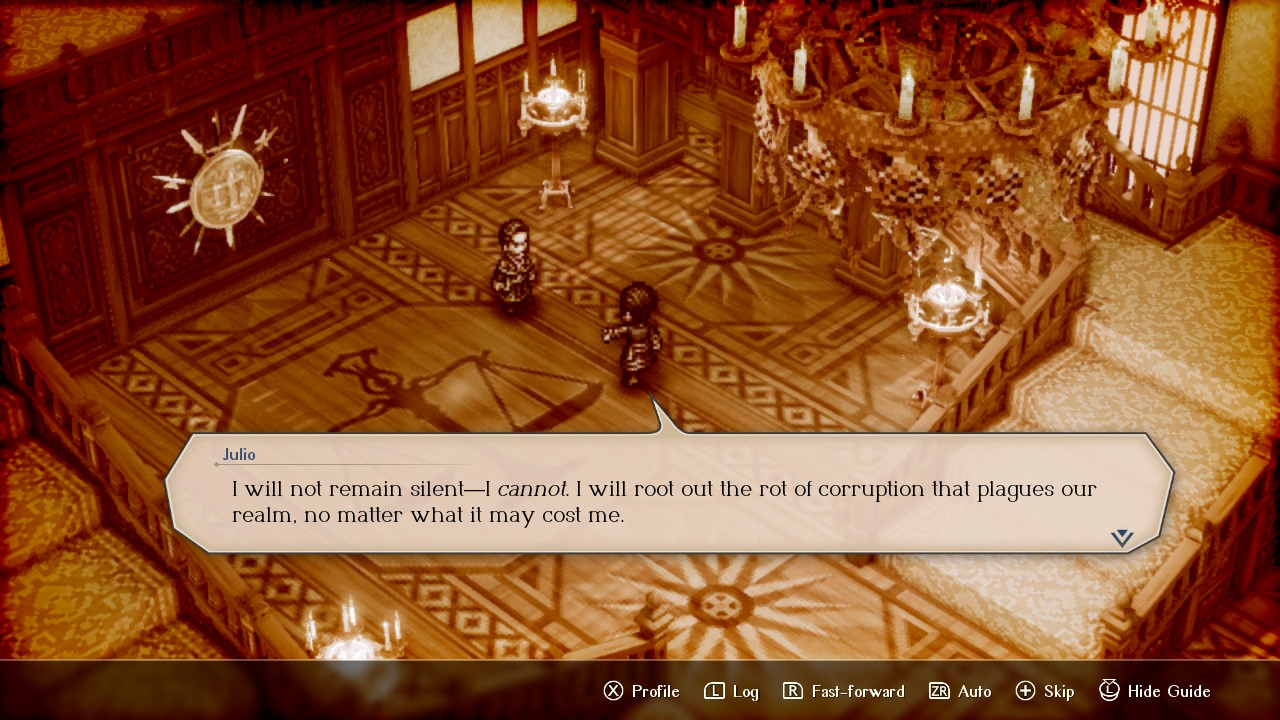 Julio: 'I will not remain silent -- I cannot. I will root out the rot of corruption that plagues our realm, no matter what it may cost me.' Gustadolph: 'Once the people have had a taste of true freedom Aesfrost would offer them, there will be no turning back.' 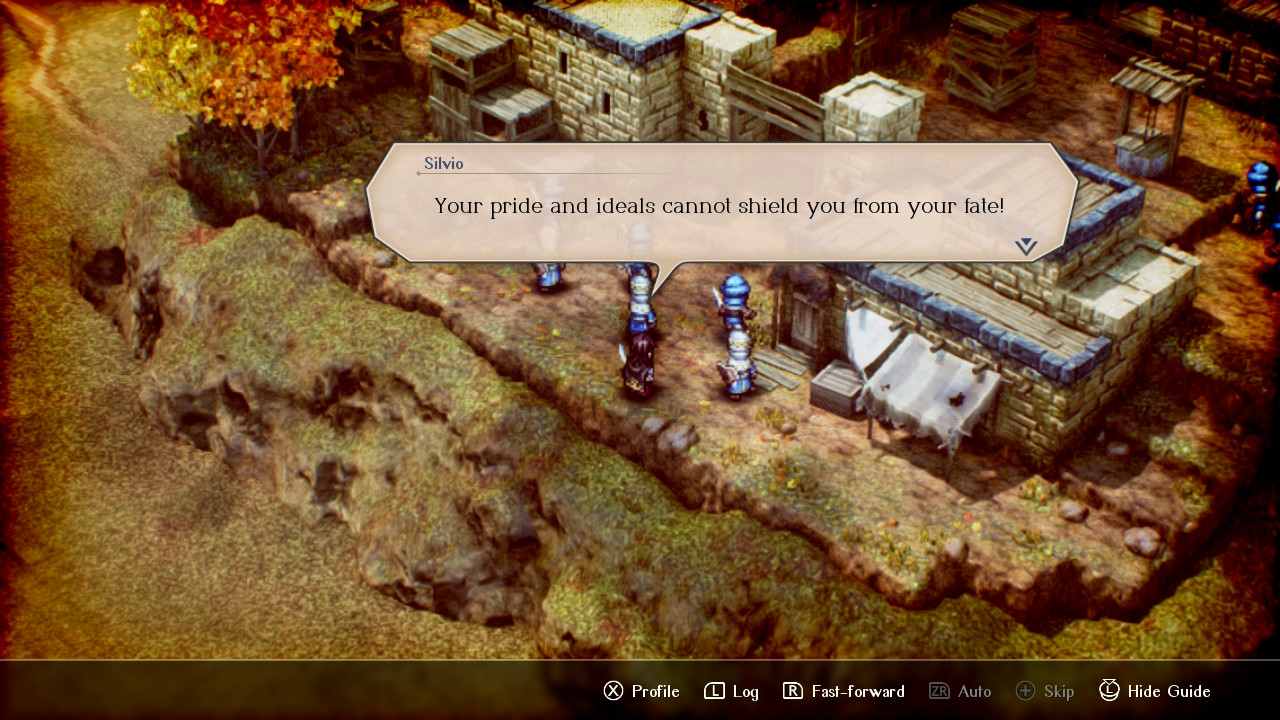 Silvio: 'Your pride and ideals cannot shield you from your fate!' 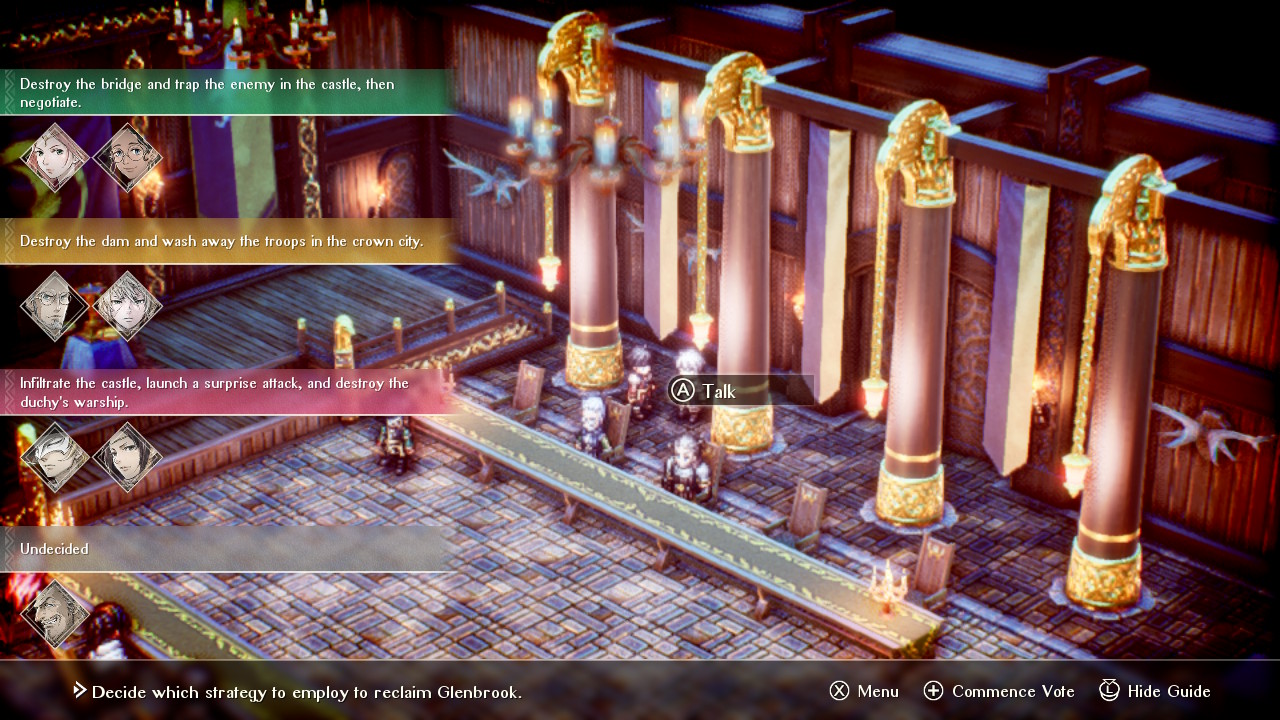 Decision point where you have to convince your advisers to vote for a specific path. 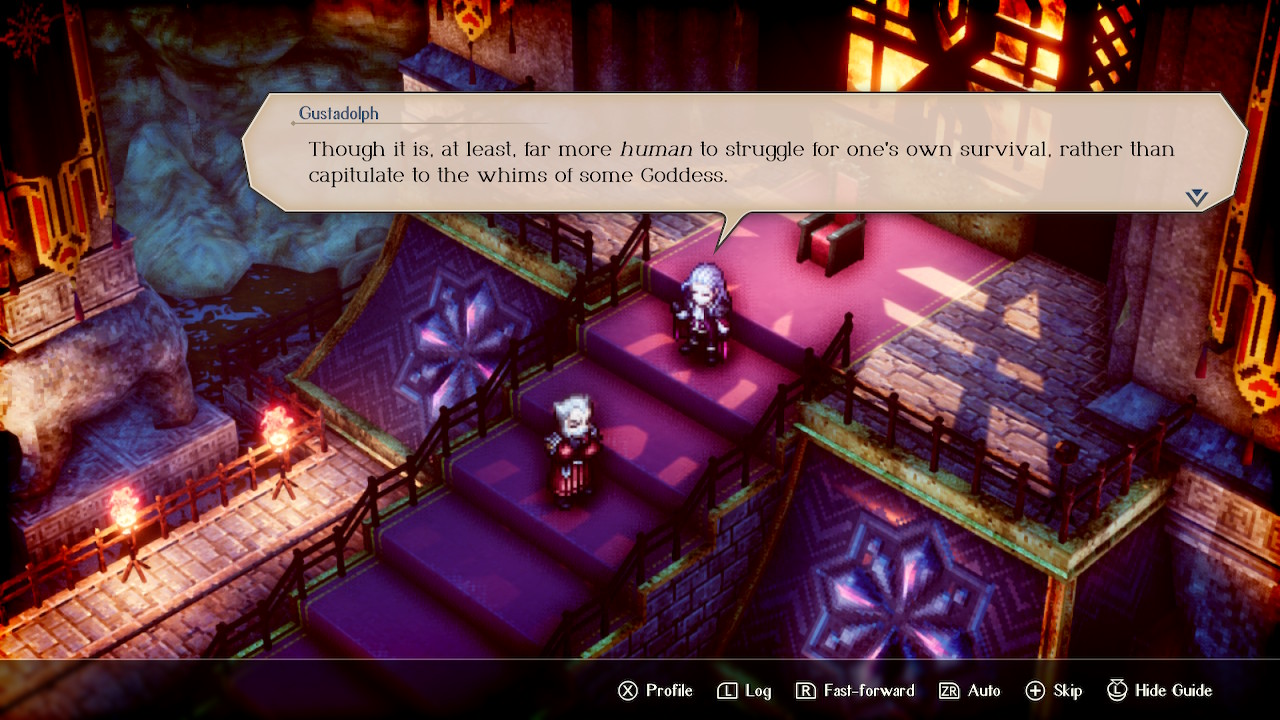 Gustadolph: 'Though it is, at least, far more human to struggle for one's own survival, rather than capitulate to the whims of some Goddess.' 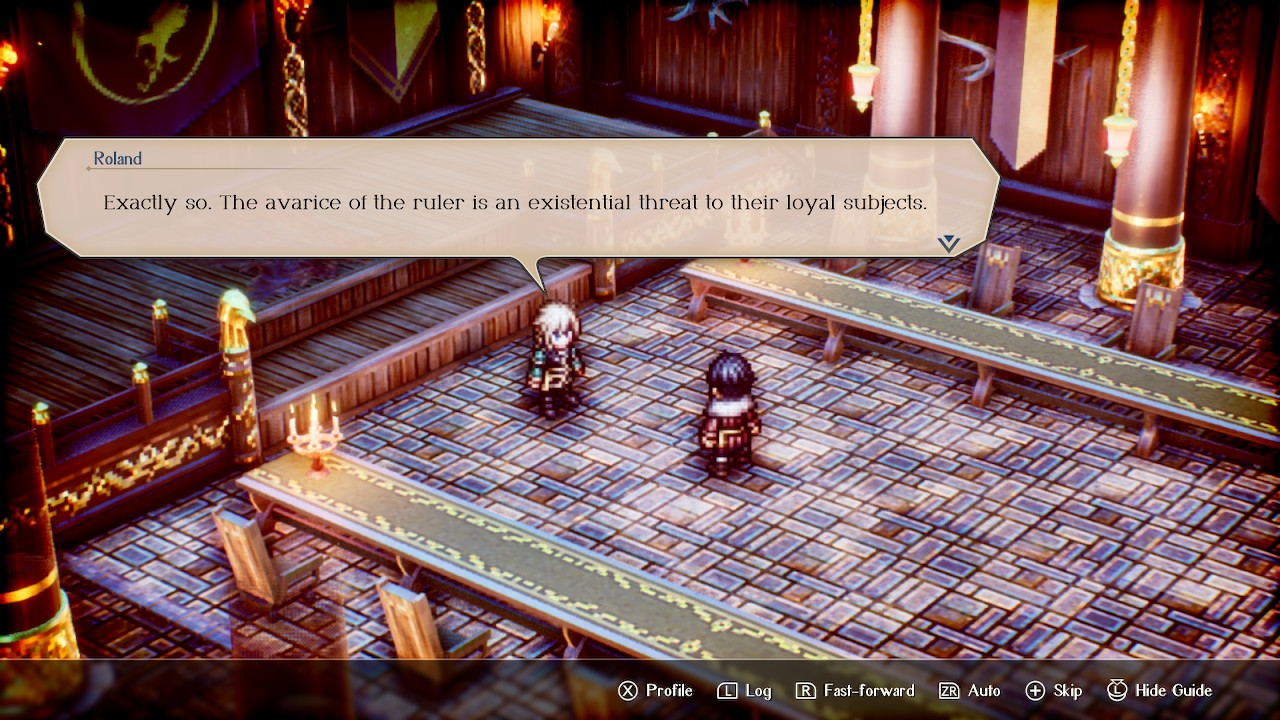 Roland: 'Exactly so. The avarice of the ruler is an existential threat to their loyal subjects.' 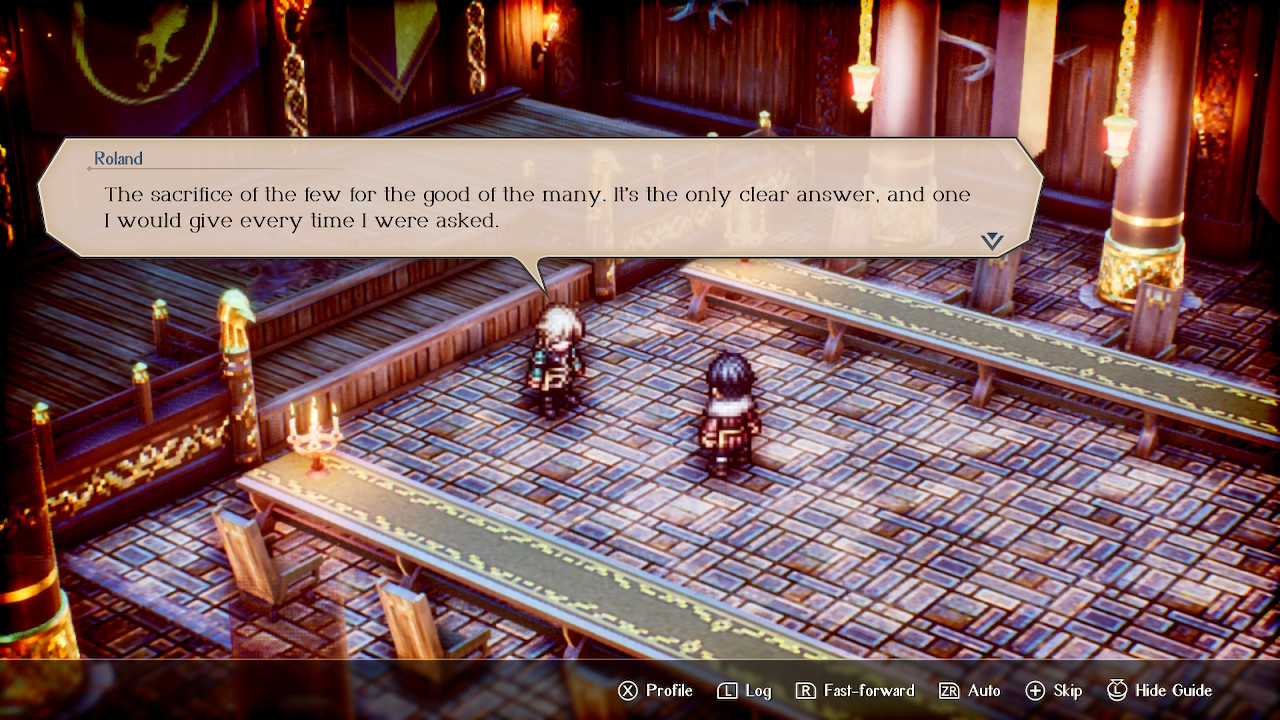 Roland: 'The sacrifice of the few for the good of the many. It's the only clear answer, and one I would give every time I were asked.' 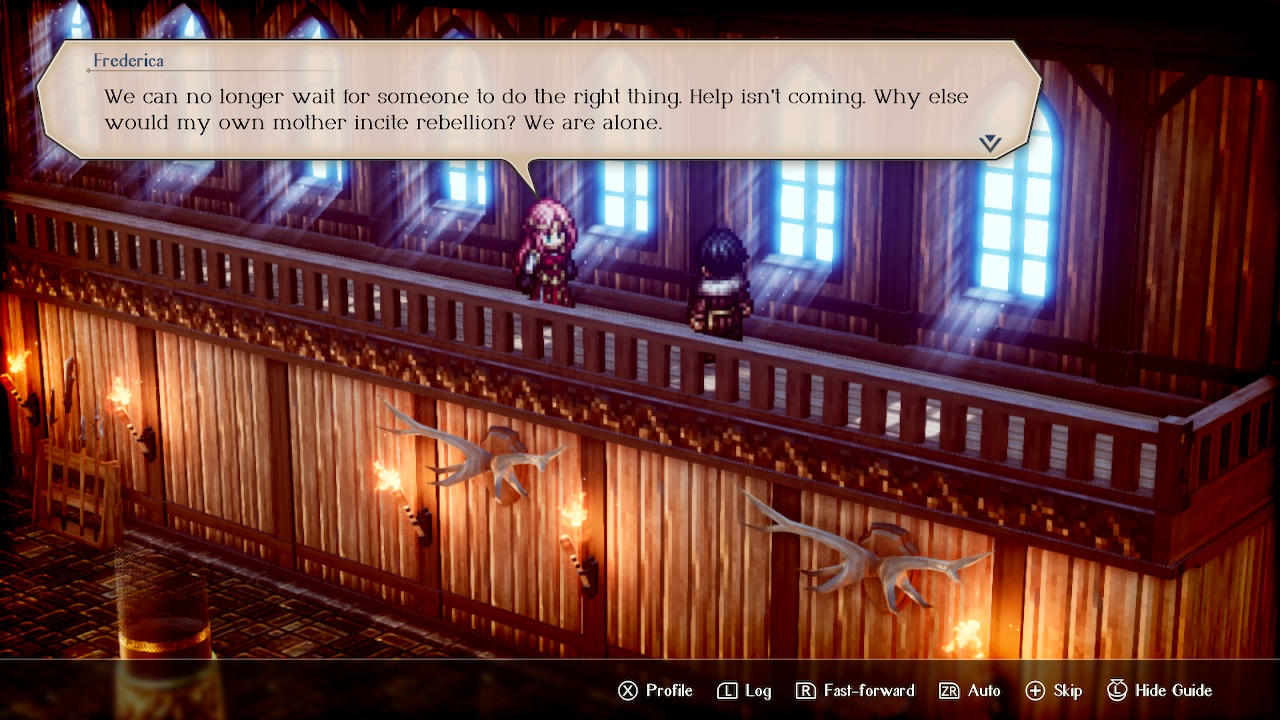 Frederica: 'We can no longer wait for someone to do the right thing. Help isn't coming. Why else would my own mother incite rebellion? We are alone.' 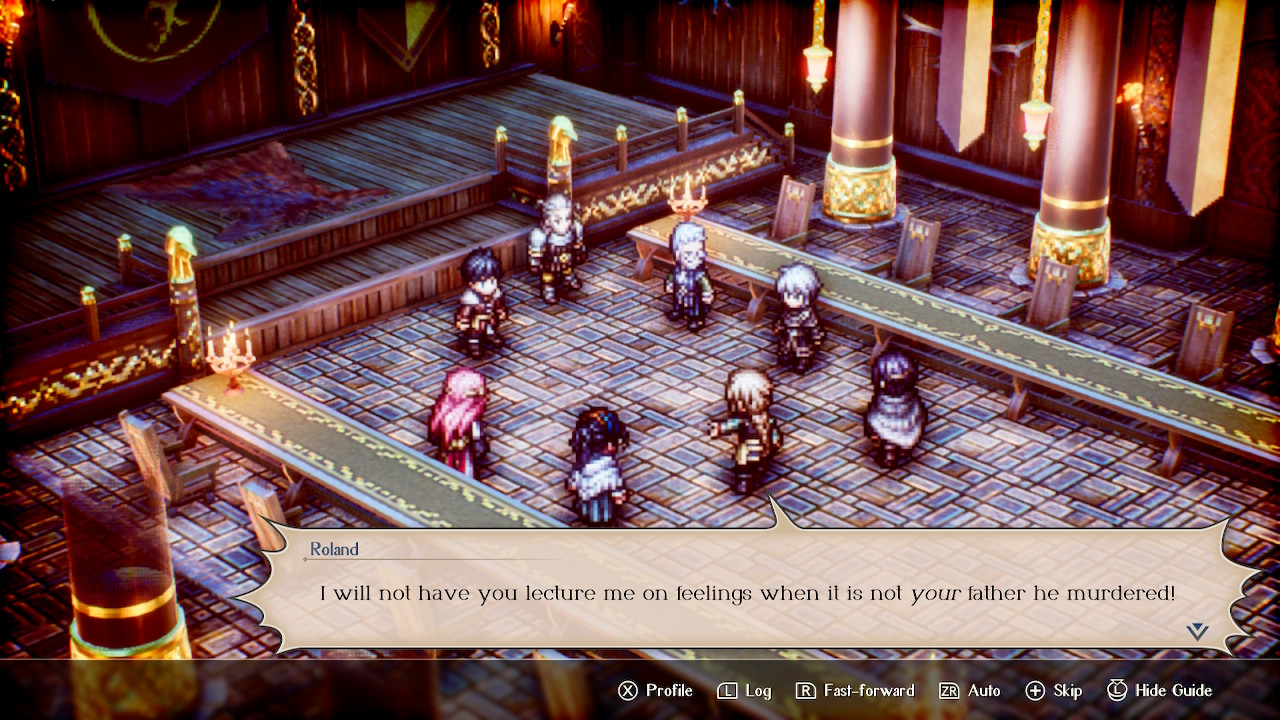 Roland: 'I will not have you lecture me on feelings when it is not your father he murdered!' 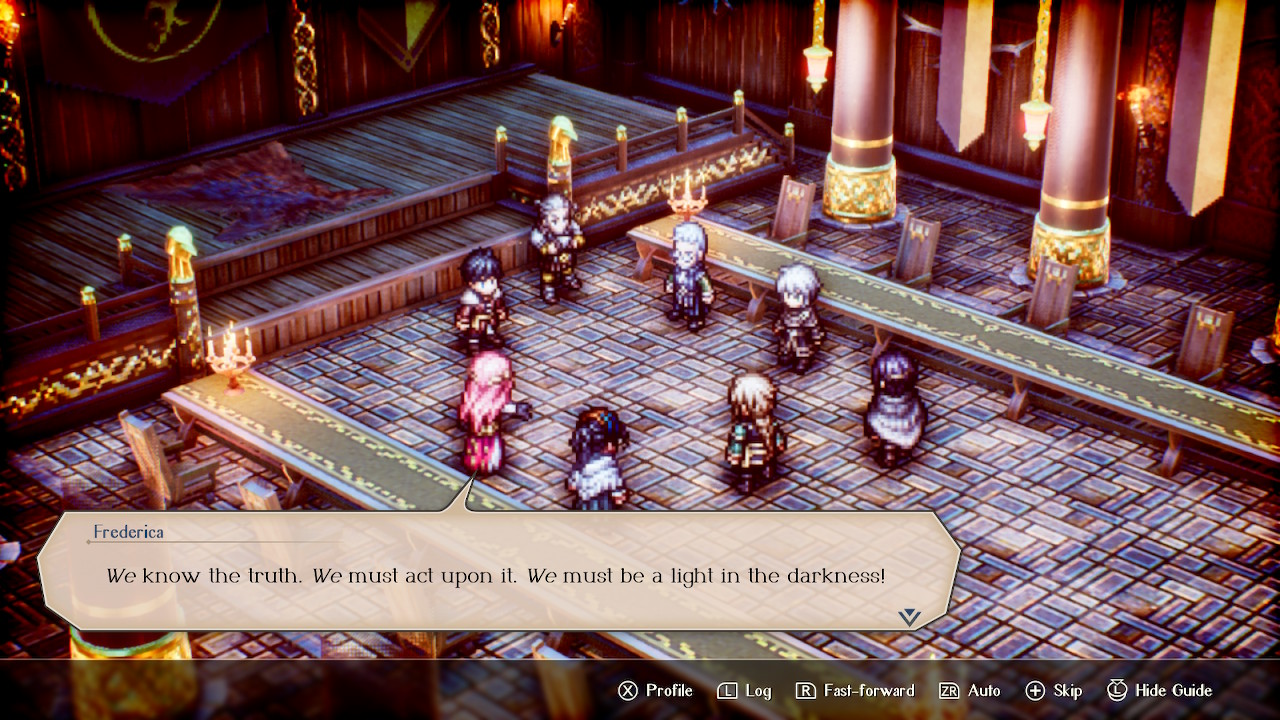 Frederica: 'We know the truth. We must act upon it. We must be a light in the darkness!' 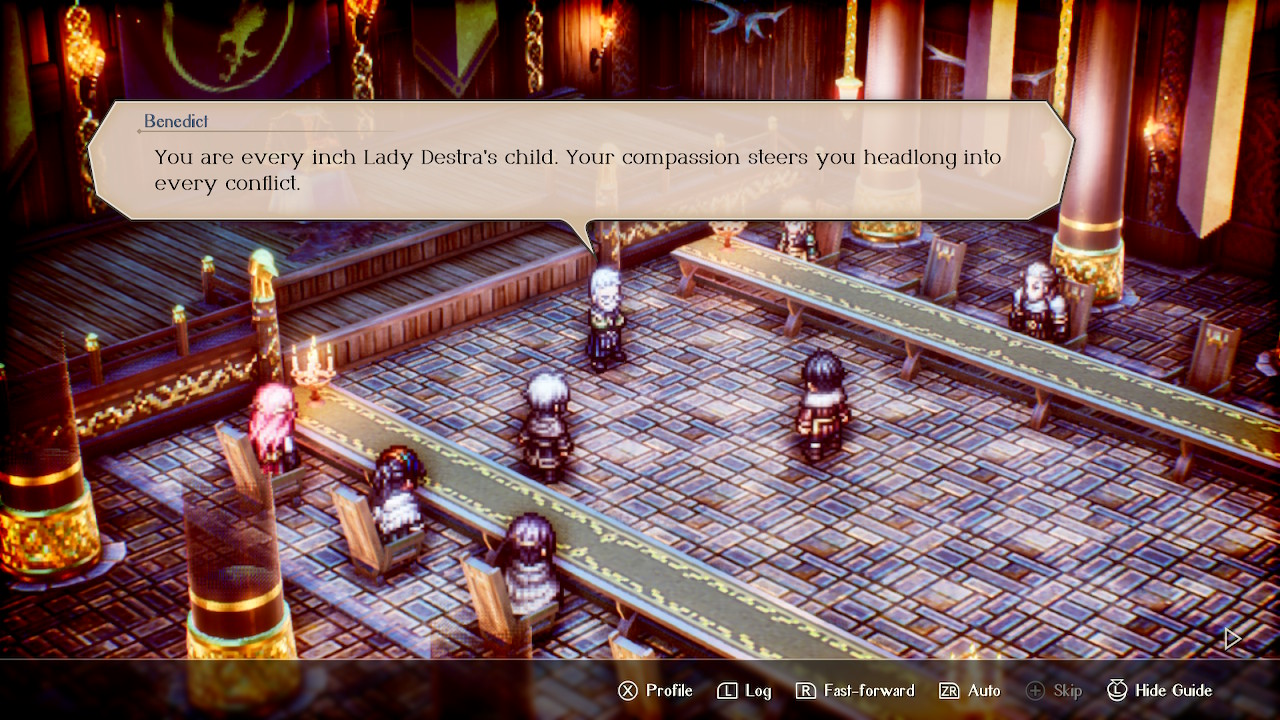 Benedict: 'You are every inch Lady Destra's child. Your compassion steers you headlong into every conflict.' 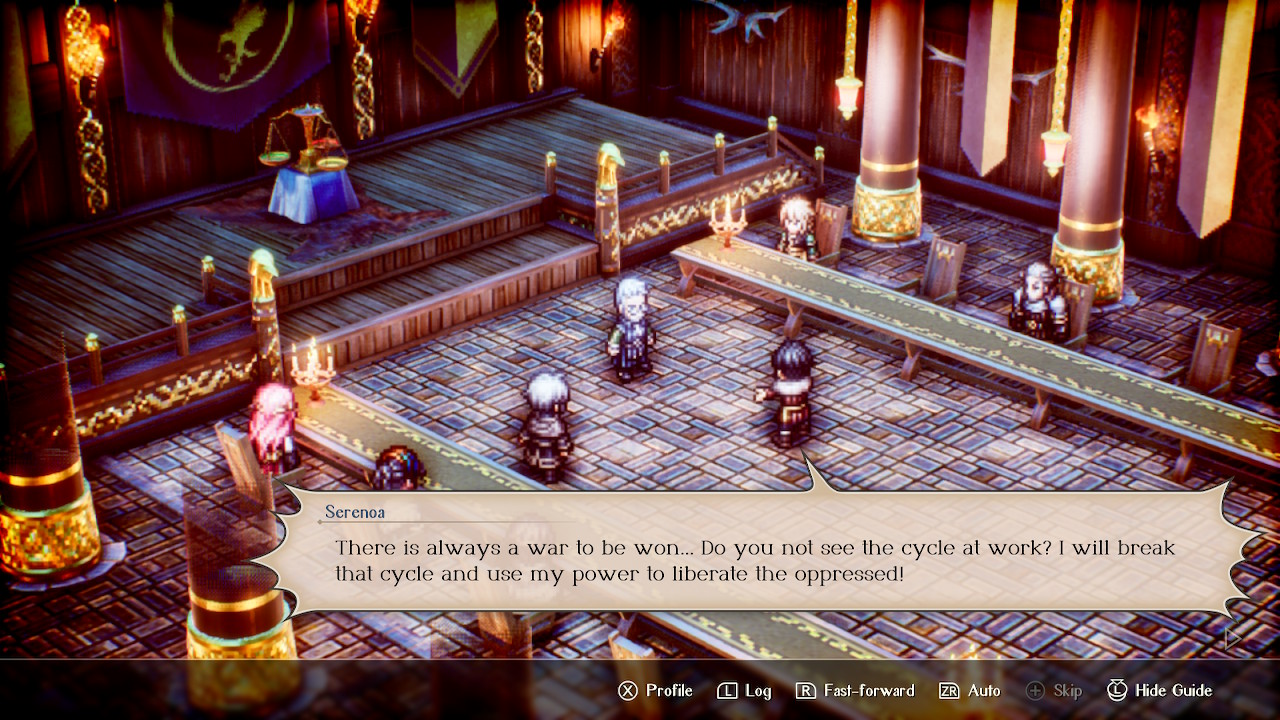 Serenoa: 'There is always a war to be won... Do you not see the cycle at work? I will break that cycle and use my power to liberate the oppressed!' 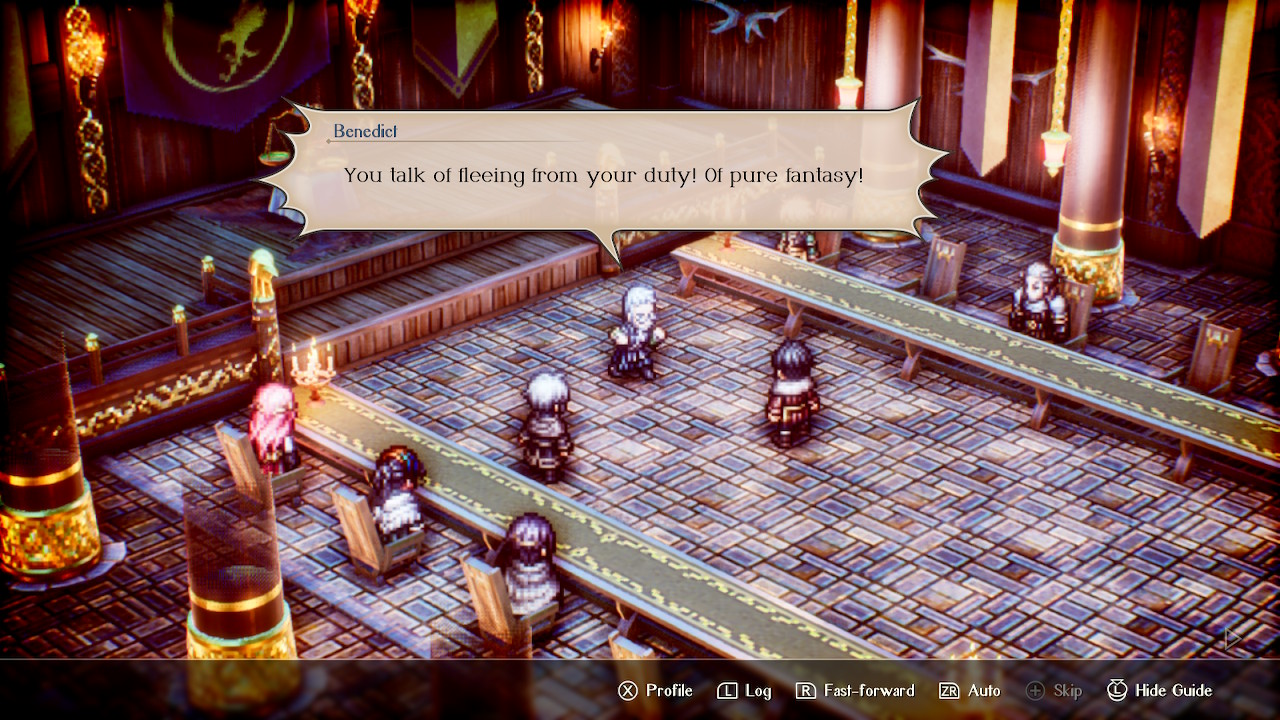 Benedict: 'You talk of fleeing from your duty! Of pure fantasy!' Geela: 'It takes no great intuition to see that this world is falling ever deeper into chaos. The reasons, however, remain elusive.' 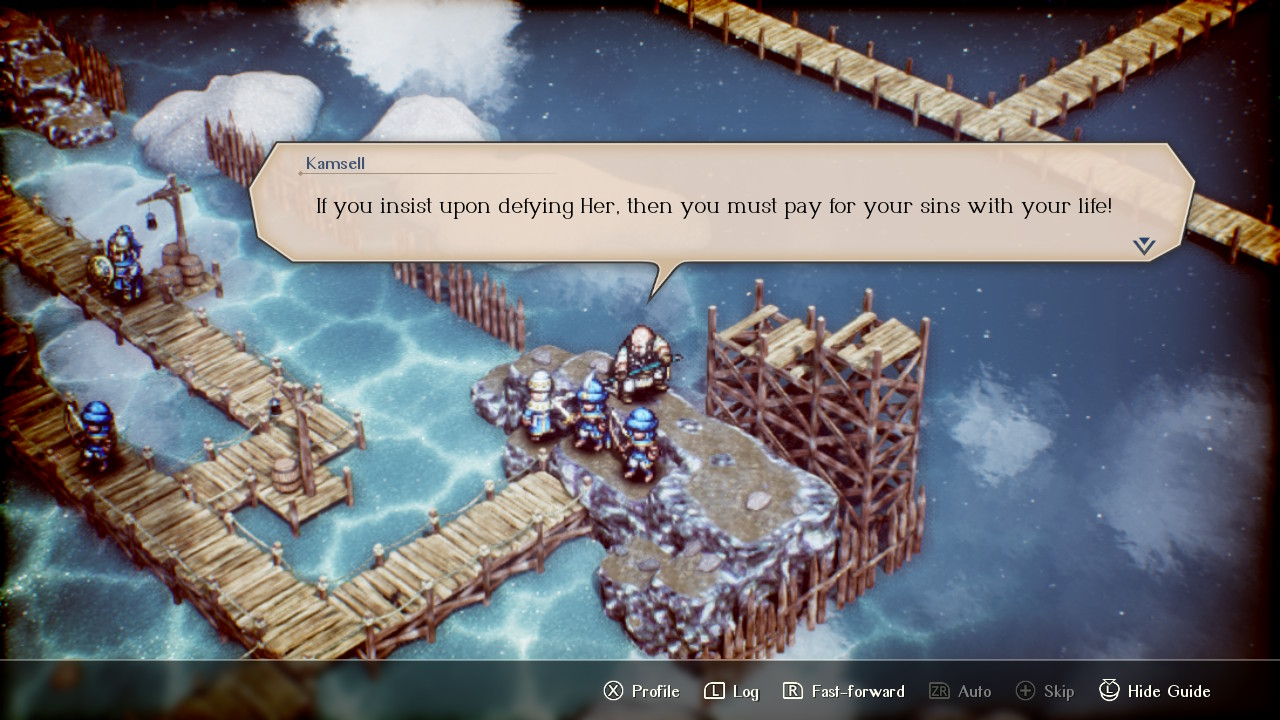 Kamsell: 'If you insist upon defying Her, then you must pay for your sins with your life!' 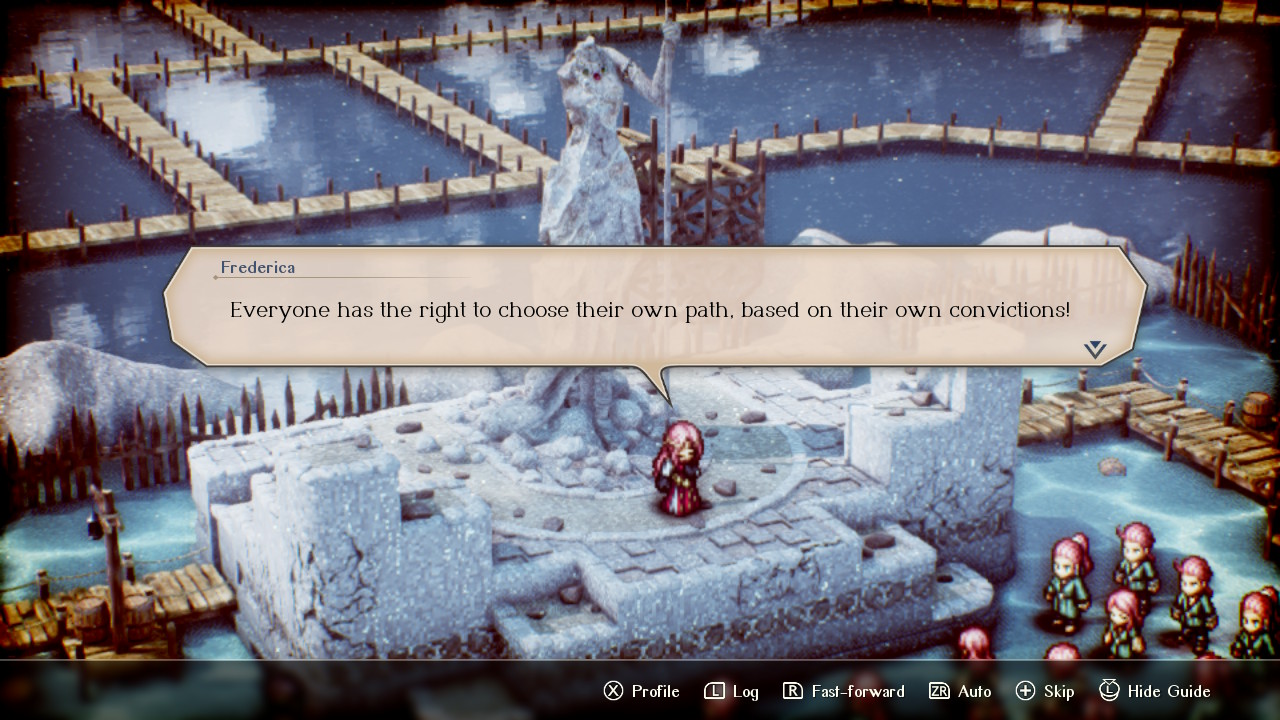 Frederica: 'Everyone has the right to choose their own path, based on their own convictions!' 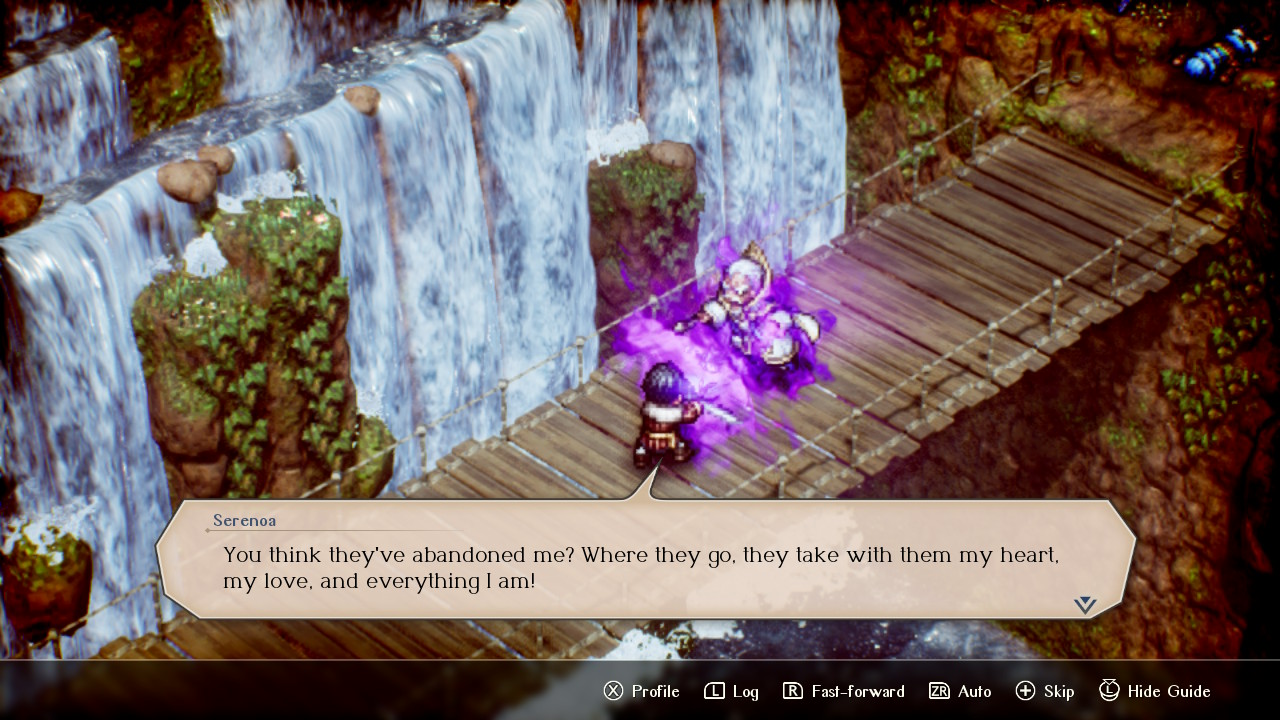 Serenoa: 'You think they've abandoned me? Where they go, they take with them my heart, my love, and everything I am!' 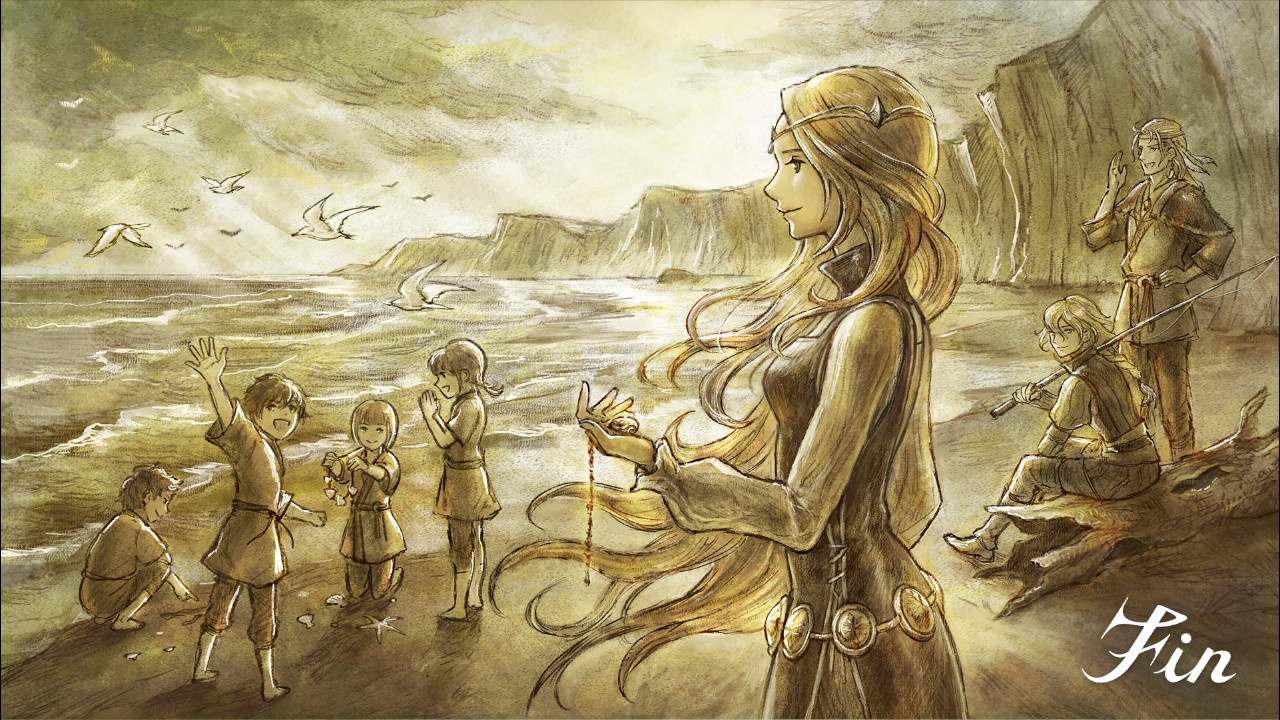 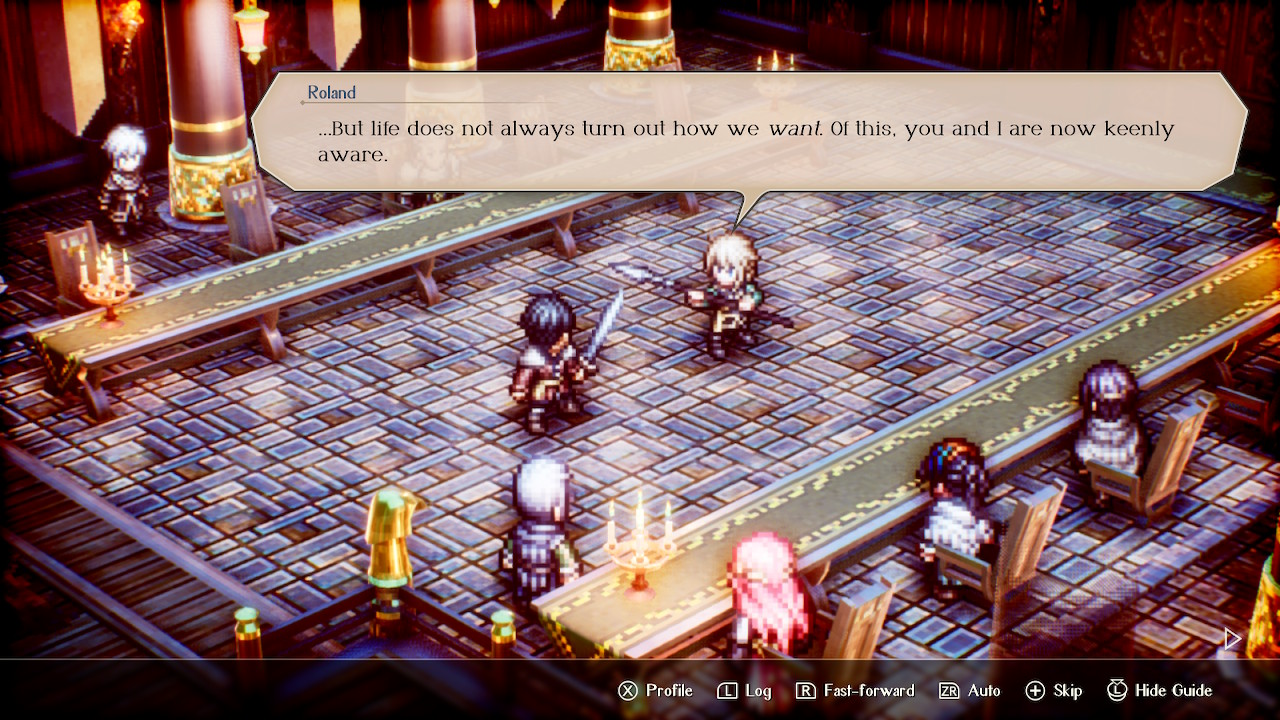 Roland: '...But life does not always turn out how we want. Of this, you and I are now keenly aware.' 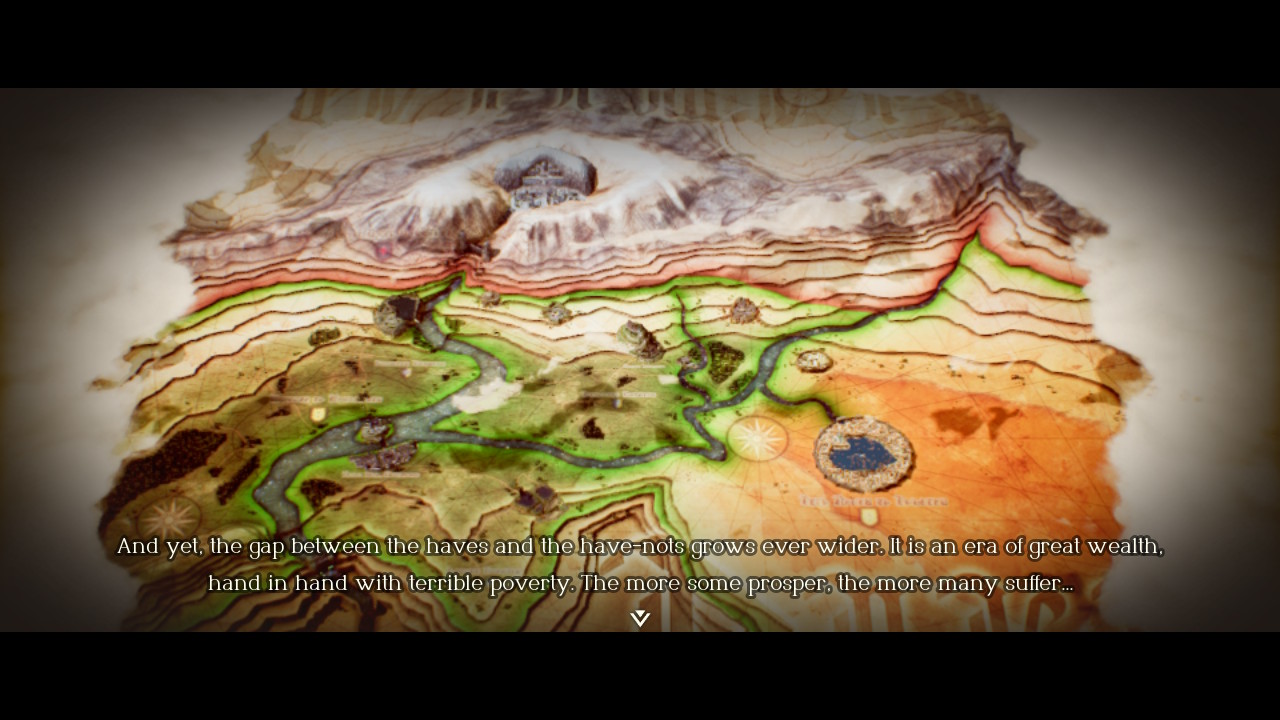 Narrator: 'And yet, the gap between the haves and the have-nots grows ever wider. It is an era of great wealth, hand in hand with terrible poverty. The more some prosper, the more many suffer...' 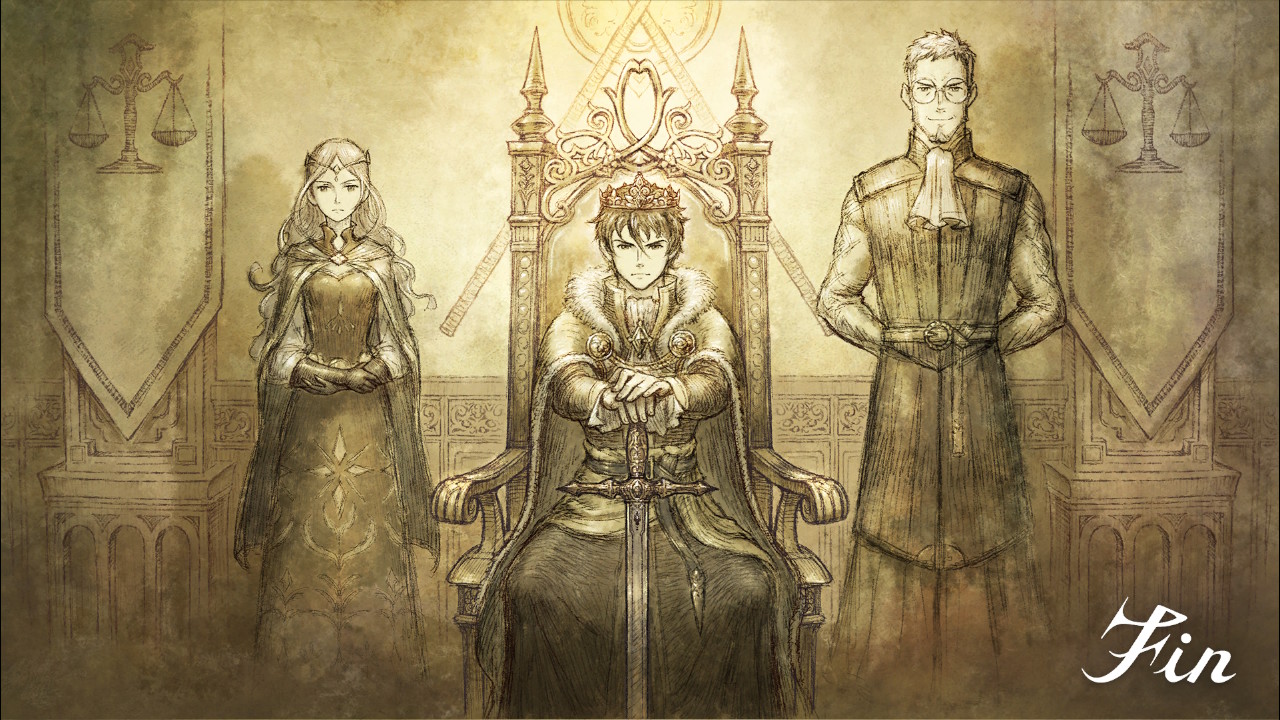 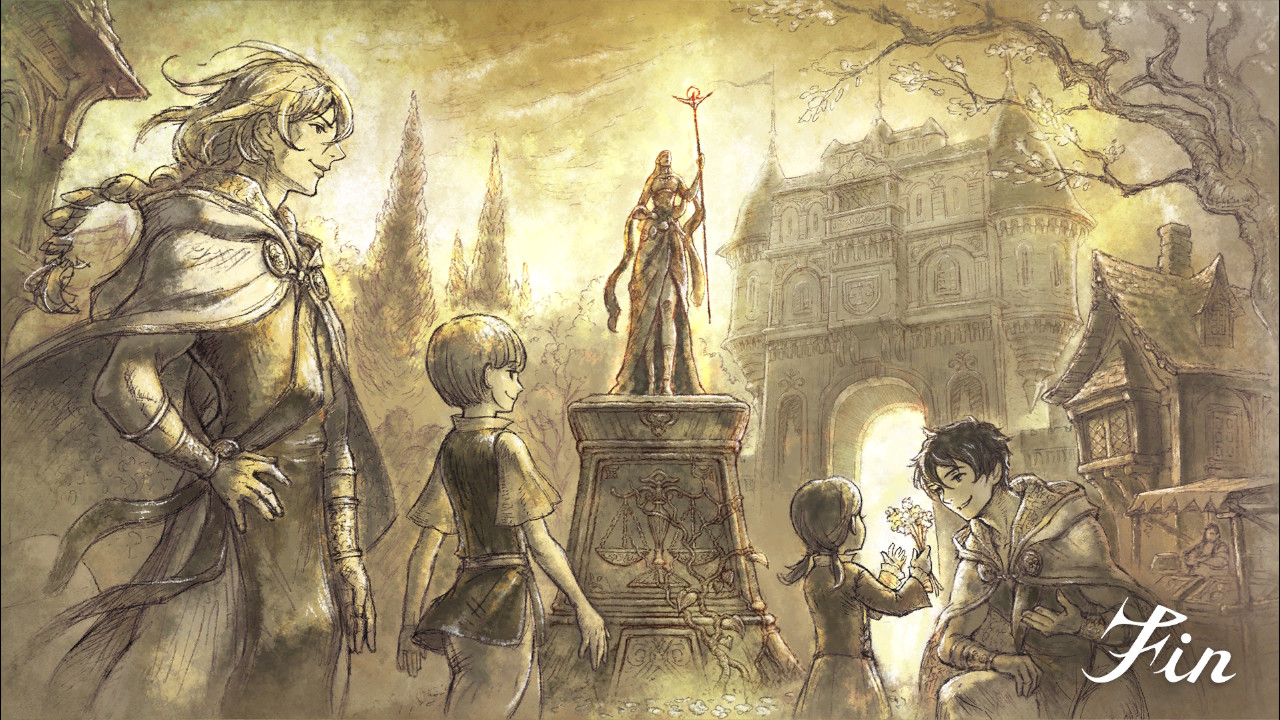 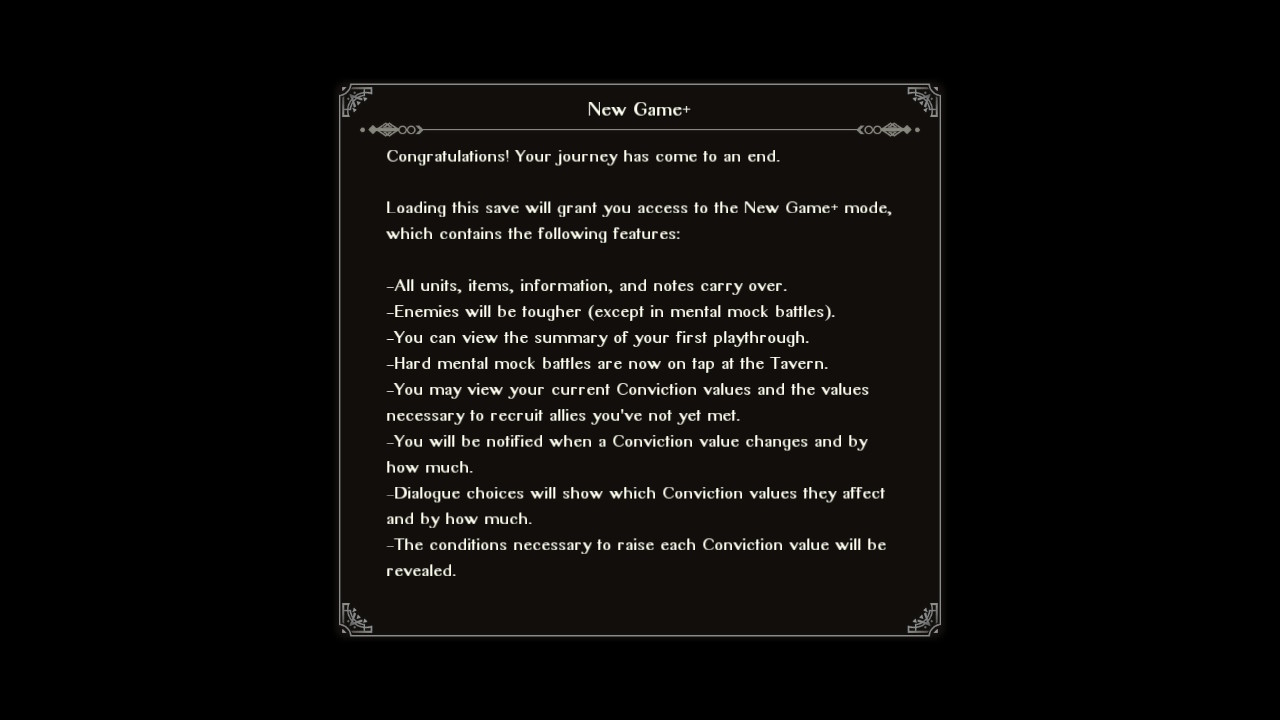 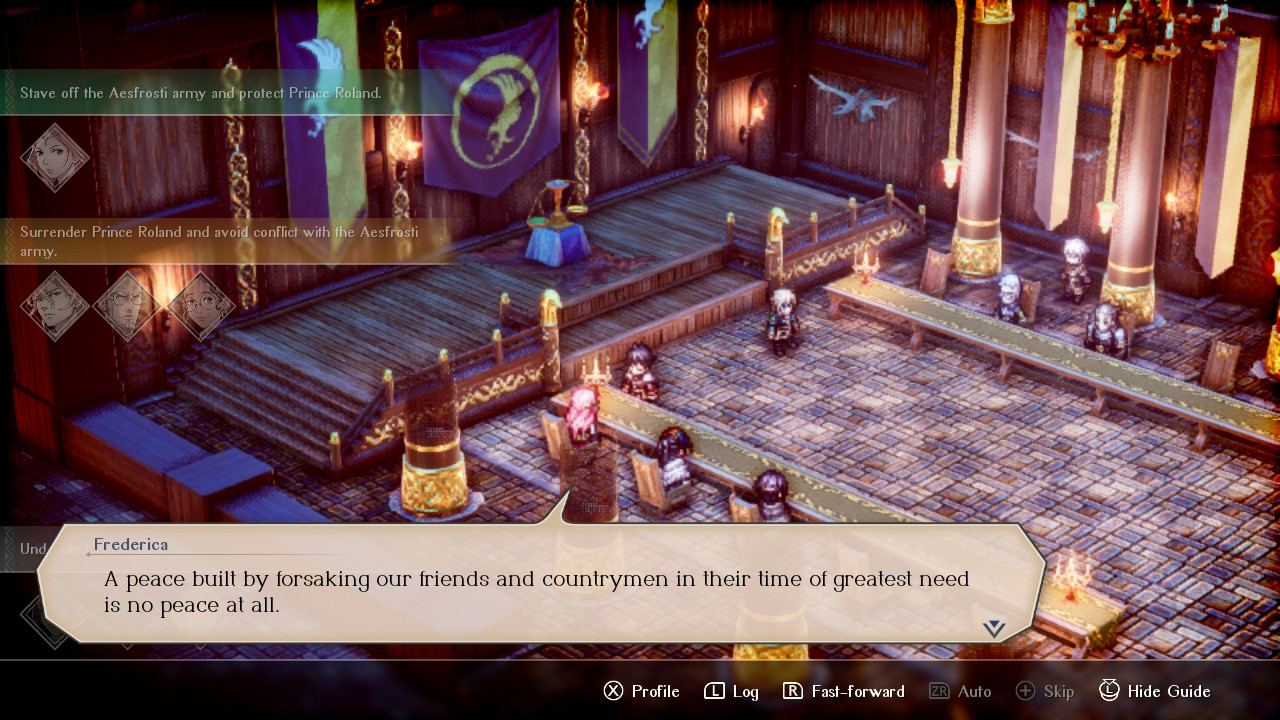 Frederica: 'A peace built by forsaking our friends and countrymen in their time of greatest need is no peace at all.' 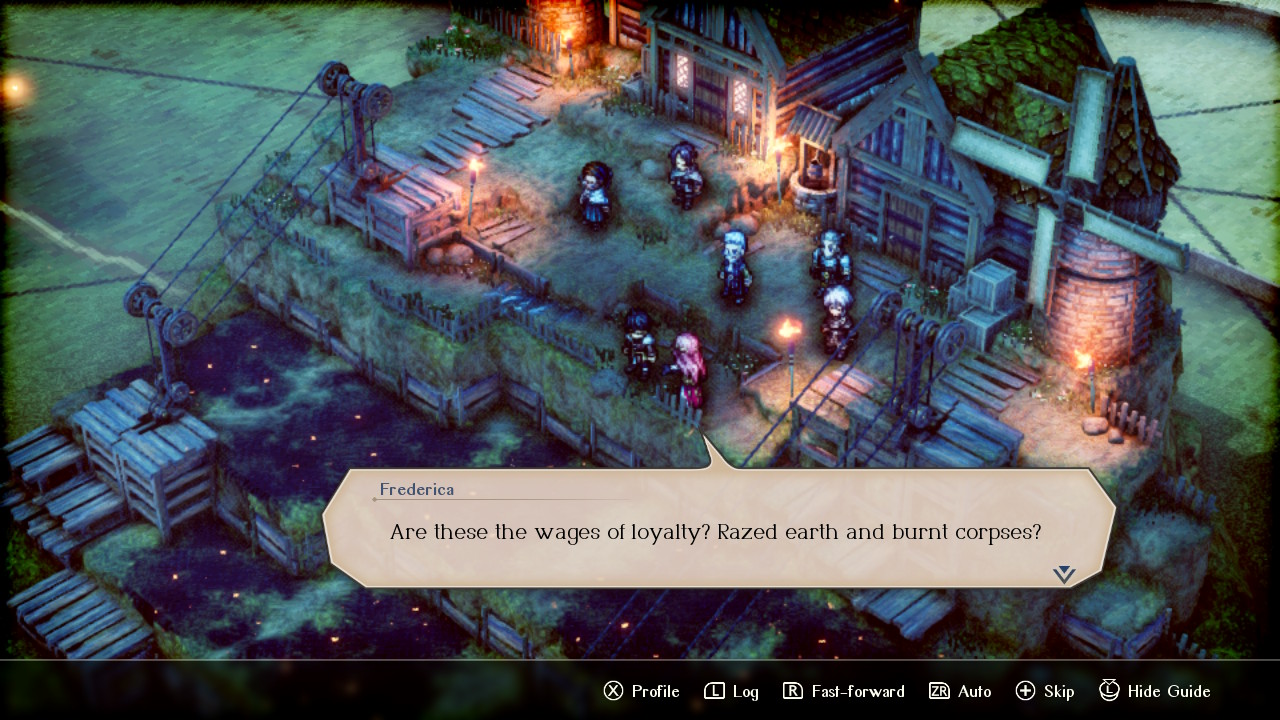 Frederica: 'Are these the wages of loyalty? Razed earth and burnt corpses?' 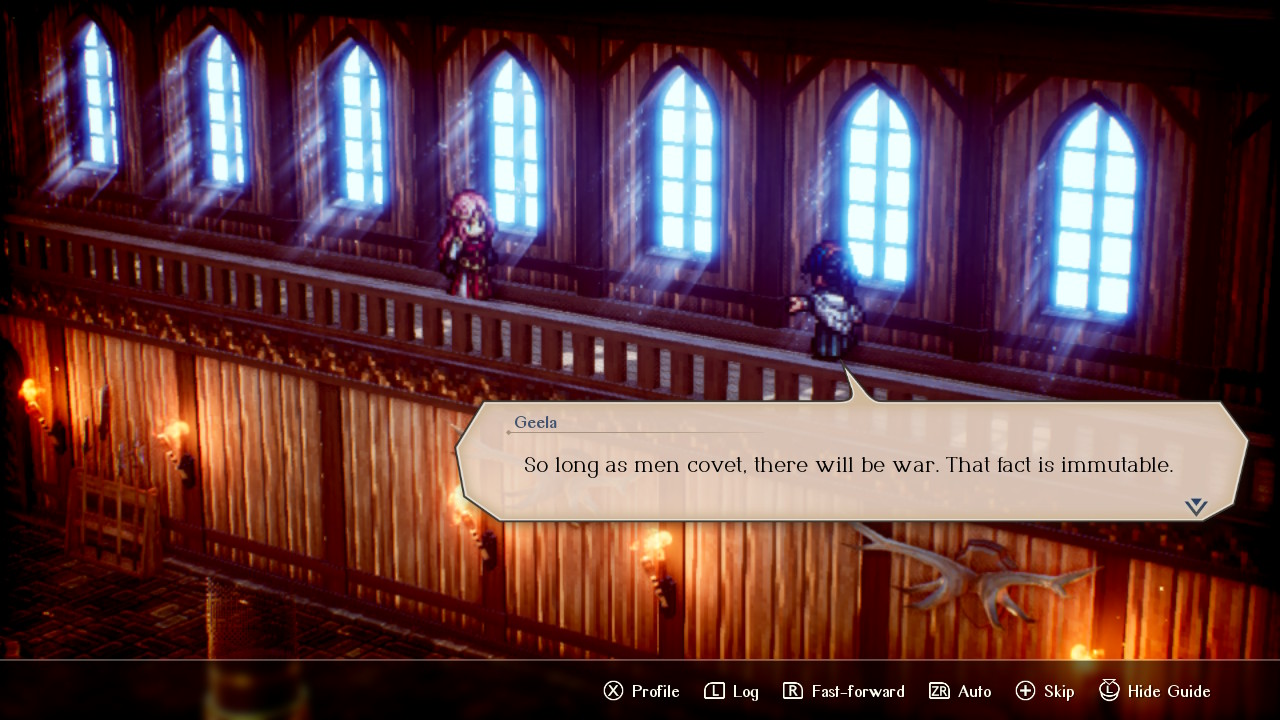 Geela: 'So long as men covet, there will be war. That fact is immutable.' 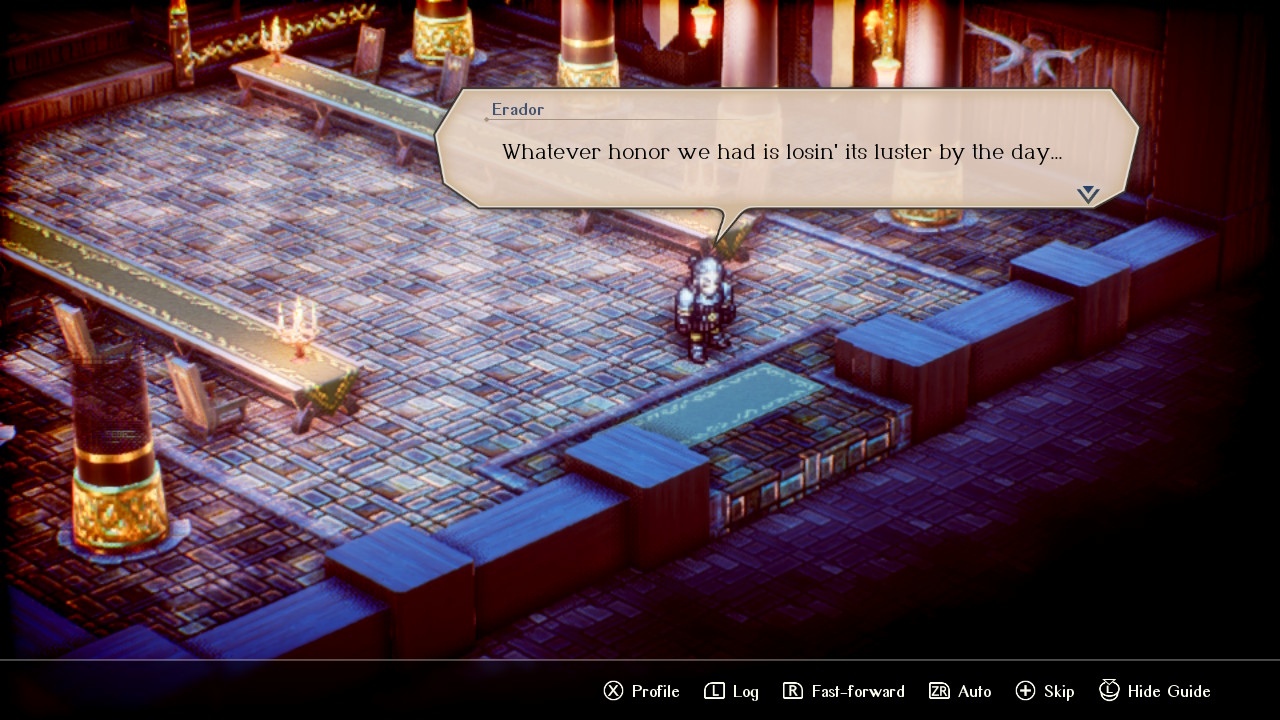 Erador: 'Whatever honor we had is losin' it's luster by the day...' 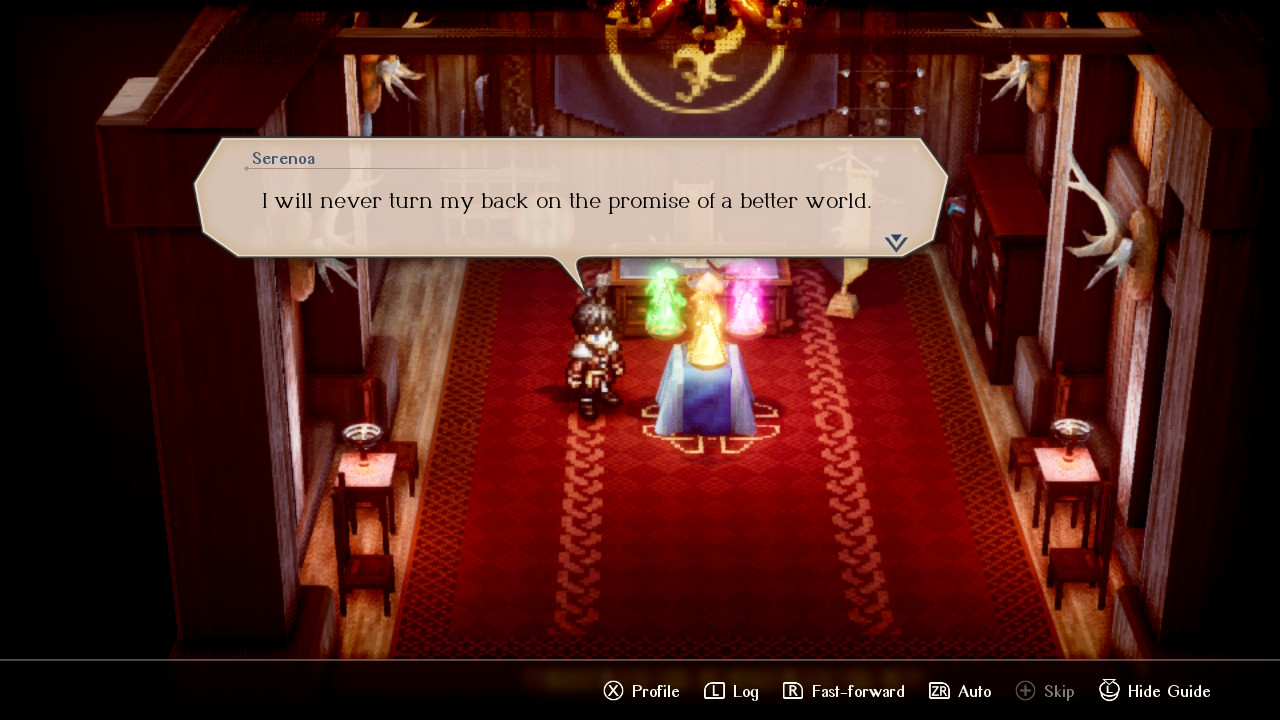 Serenoa: 'I will never turn my back on the promise of a better world.' 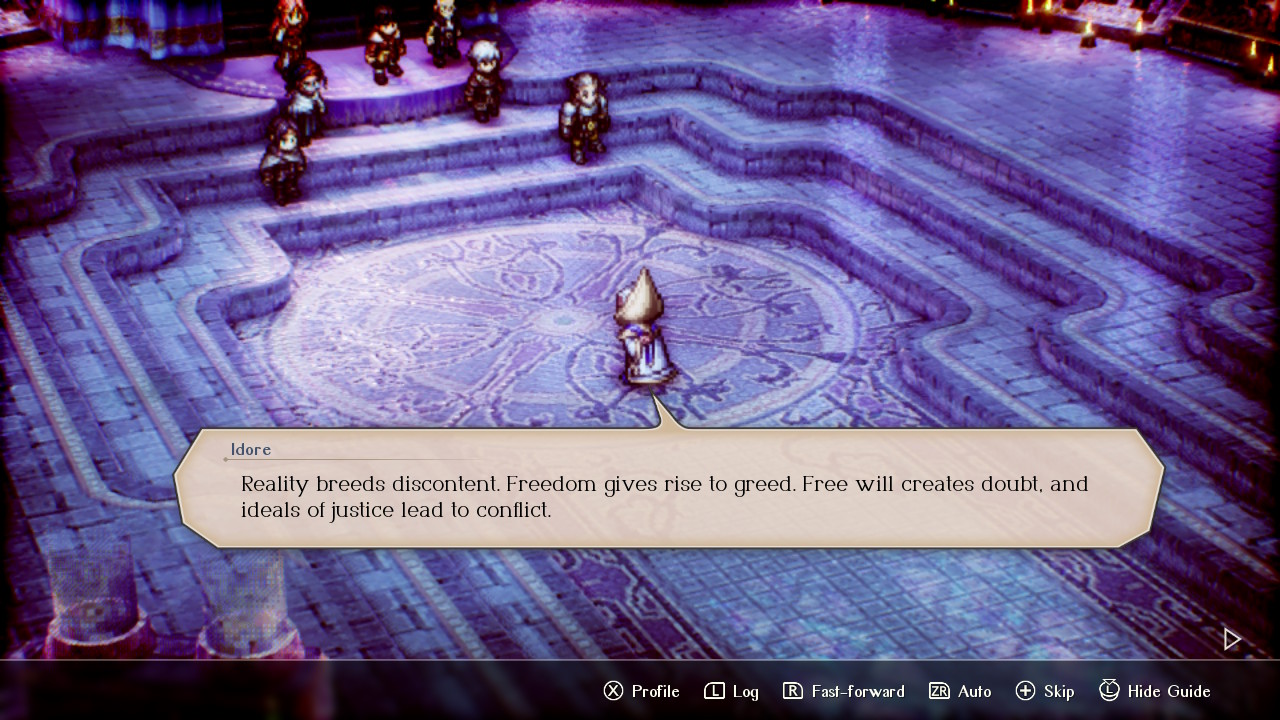 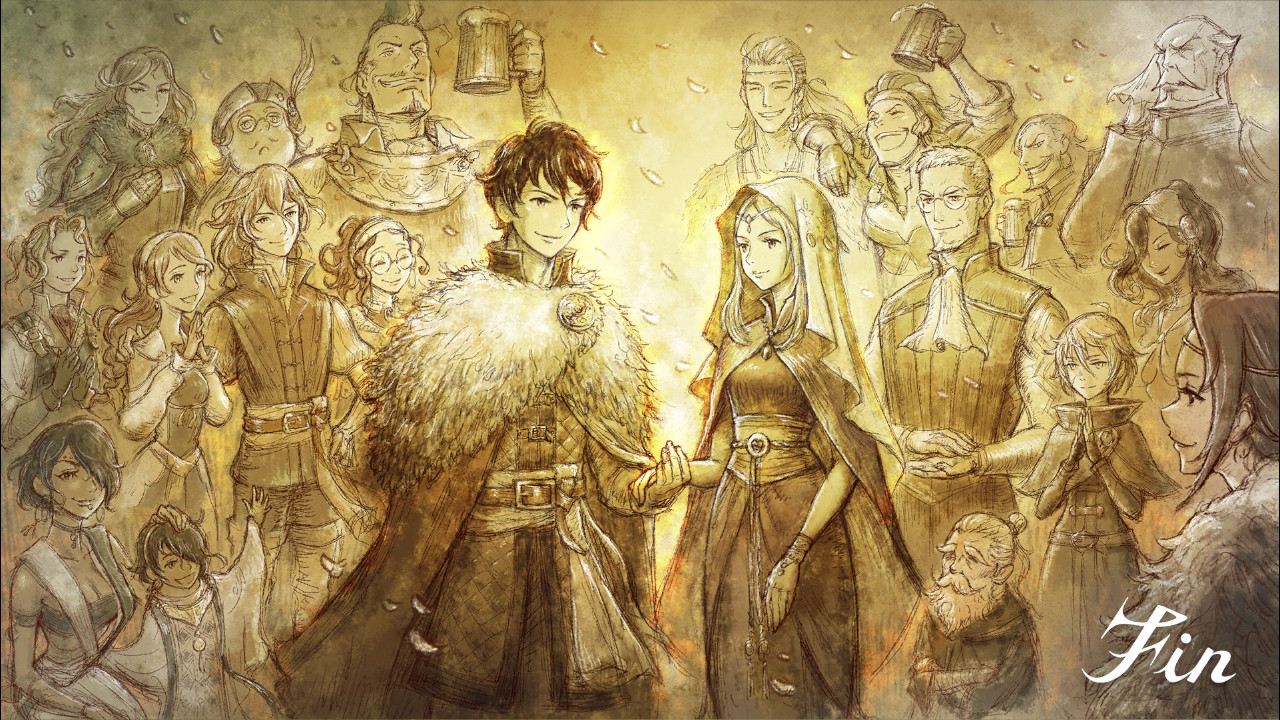