PH elections are this coming Monday. Sat down to make my final Elections 2022 ballot decisions today.

The VP vote is a bit closer; despite some age-old issues I actually think Sotto is a defendable choice given how long he has been in government service, but we have to give Leni as much support as we can, so I am voting for her VP Kiko Pangilinan.

Back in 2016, I made the effort to put together a big spreadsheet and even a Reddit megathread to list pros and cons for different senatoriables. Some friends actually messaged me recently to ask if I had something similar this time, I did not have the heart or energy to be so involved so some of my decisions here are last minute.

The first six from the Robredo slate are easy picks:

Then the Makabayan senatoriables, more deserving than any of the trapos:

The others I have to justify:

That brings us to 11. The last slot is tough. I'm purposely avoiding any trapos, and I also discarded some candidates other people recommended:

Obviously, all of these red flags are mostly allegations (riding on flimsy Tweets even), but better to look for a candidate that doesn't have any right?

Unfortunately, the search has failed. I am a bit tempted to just leave slot 12 blank, but instead I will begrudgingly and tentatively put Dick Gordon in this slot. He has red flags too - he smells of being a trapo and is arrogant and abrasive and he got De Lima in prison and was a Duterte enabler especially in the early years - but at least he's a known entity and is supporting Leni and I actually have a record of voting for him every time he is up, so might as well maintain the streak? I know the justification is weak, so if any other reasonable candidate pops up for this slot I am very willing to reconsider.

(Actually a lot of the people I have spoken to are also stuck at 11!)

Voting for the local seats is tougher because information about the candidates is usually sparse, but this time my evaluation criteria is, as the above image implies, based on hate voting. I don't want anyone allied with Defensor (Ivermectin advocate) or Crisologo ("an evil Ilocano warlord stuck in the 70s", as a friend says), so I will simply vote for everyone allied with current Quezon City Mayor Joy Belmonte. Belmonte's performance was a bit off at the start of the pandemic, but she mostly recovered and has done relatively well afterwards. She has avoided openly endorsing any national candidate for this election. 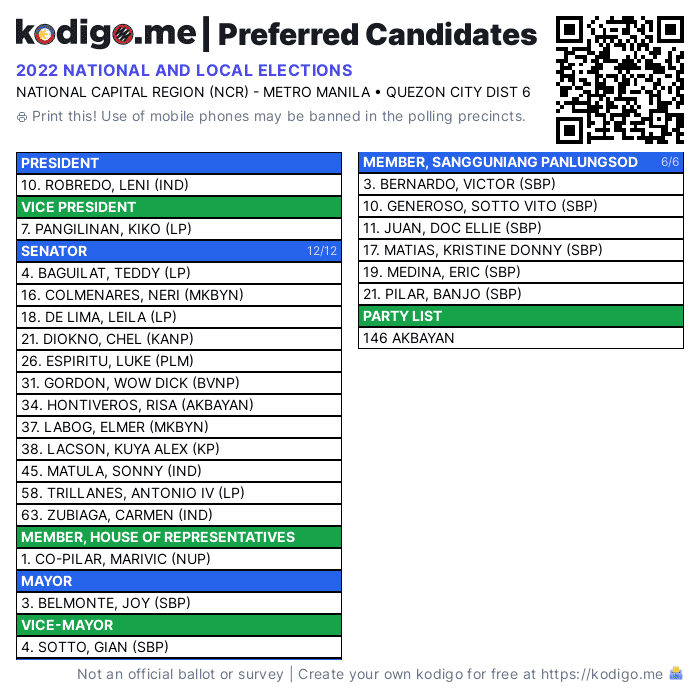 (I will admit this kodigo.me website is super convenient and hopefully they stick around for the next one.)

I will admit I have been a bit disillusioned with the PH political scene since 2016, where I was very vocal on social media about the election. This time I mostly stayed publicly quiet, relatively at least. Elections discussions were limited to smaller chat groups. I mean, why bother talking to the public when people don't listen and still make dumb choices again and again? I even reduced my Twitter usage the past month or so and ubsubscribed from the r/Philippines subreddit because it just depressed me every time I read some story about people making bad choices or Pro-Marcos stuff or how the authorities were ignoring blatant election violations, etc etc.

However, the growing movement around VP Robredo's candidacy, largely driven by volunteerism, has managed to keep my hopes up, even a little bit. I'm especially happy that a number of my friends who never spoke up about politics back in 2016 are more involved these days, even attending the rallies and doing the house to house campaigning and such. It makes me hopeful that the country still has the chance for a brighter future, in spite of all the problems and the trapos and the people who just easily surrender their brains to authoritarian figures or propaganda.

We can't predict what will happen on Monday. A lot of people, especially the pro-Leni ones, are very anxious about the country's future and find it hard to look beyond the elections. I feel like the disgruntled veteran here, used to disappointment, worried about the younger more idealistic types and hoping their spirits won't be shattered if things don't go our way on Monday. I try to remain hopeful, but the realist in me knows the odds are stacked against us. I feel like the outcome will either be a landslide in favor of the bad guys (as the surveys imply) or a very close fight that hopefully the good guys eventually win.

If Leni wins, against all the odds, it will feel like nothing short of a miracle, powered by a volunteer-driven campaign never before seen in PH politics. It would feel like vindication for those of us who believe this country can be better, it would feel like a victory for hope.

👍 Mark Esler
If you enjoyed my content for some reason, I'd love to hear from you! Here are some options: