I am ending my daily Wordle+variants runs. No special reason, I just felt it was time. The number of us who have been doing them daily had been dwindling for a while, and I was at the point where I would occasionally almost forget to do them and at one point I crammed all of them in 5 minutes before midnight. Rather than waiting for the daily habit to slowly fade away, I'll just end it now so at least I get to do a wrapup!

(When I announced to our Discord Wordle thread that I would be ending my daily runs, someone commented "blog post incoming", so here we are.)

The original Wordle that started it all. Some people find it hard, but I'm used to Word/logic games, so I have never lost a Wordle. I managed over three months worth of consecutive daily runs.

A lot of people like to approach Wordle methodically and always start with a predetermined set of guesses that maximizes the letters eliminating. I like to have fun, so I use a different starting word every time. I imagine (without any mathematical backing) that sticking to the same starting guess every time also lowers the odds of the mythical "Wordle in 1". Although, I never achieved that anyway!

Also, OG Wordle is the only one of these variants I've been playing on my phone. The rest I play on desktop. Too bad there's no way to move your stats across to a different browser. 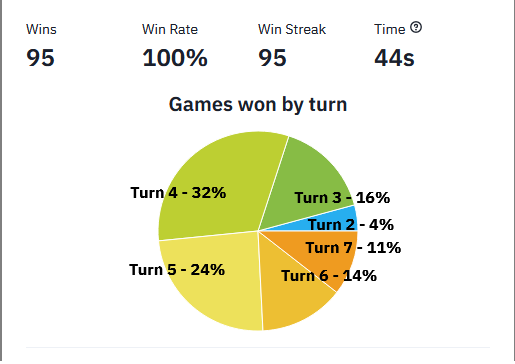 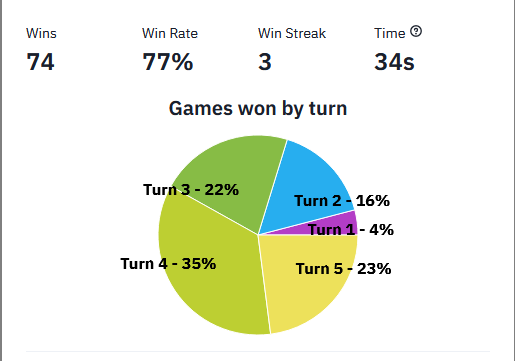 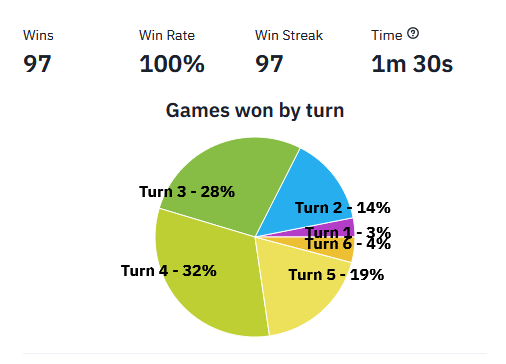 Saltong is the Filipino Wordle variant. It comes in three different flavors: OG Saltong follows the same pattern as OG Wordle: 5-letter words, 6 guesses. Saltong Mini has 4-letter words and 5 guesses, while Saltong Max has 7-letter words and 8 guesses. The balancing here is actually out of whack; Wordle variants with shorter words should get more guesses, not less, since you get less slots per word to eliminate letters with. For this reason, Saltong Mini ends up as the variant where I have gotten the lowest win rate, at a measly 77%. OG and Max Saltong are at a comfortable 100% win rate, same as OG Wordle.

(The site also features Saltong Hex, which is a Filipino version of the [NYT Spelling Bee]/2021/11/couple-word-games/). I didn't really get into it because my Filipino vocab is actually much worse than my English vocab.) 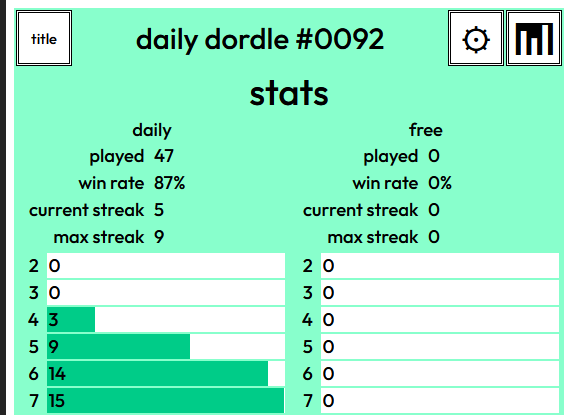 Dordle is double Wordle, you must guess 2 words at the same time. This started a predictable trend of ever-escalating X-Wordles, including Quordle below. The worst I've seen is a 64-wordle, the Sexagintaquattordle.

Anyway, I haven't managed to 100% Dordle, mostly I fail when I waste too much time on one of the words and are out of guesses for the other one. 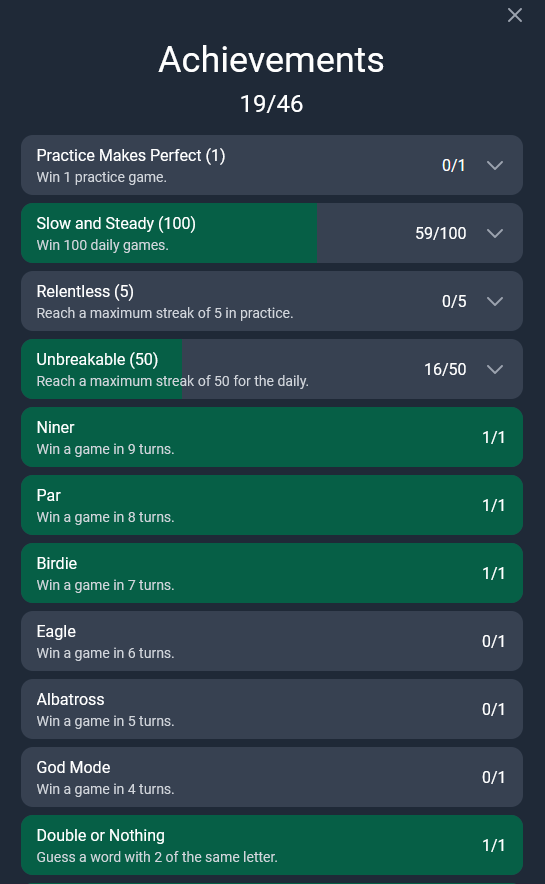 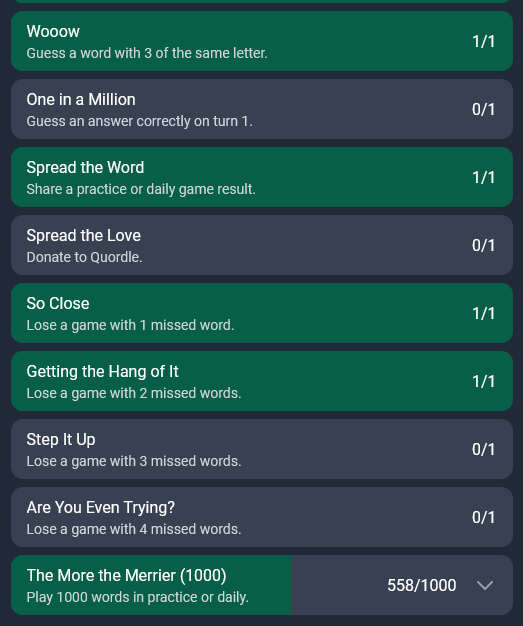 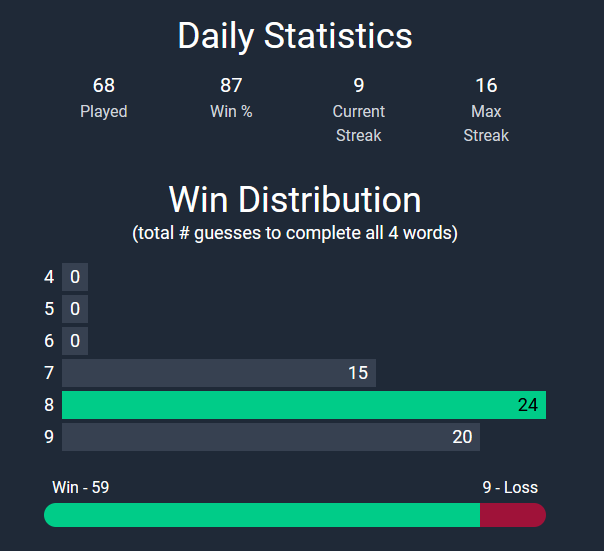 Quordle is of course the 4-wordle variant. My win rate here is about the same as Dordle, and I usually lose for the same reasons. The best thing about Quordles is it's the only variant I play which decided to add achievements. 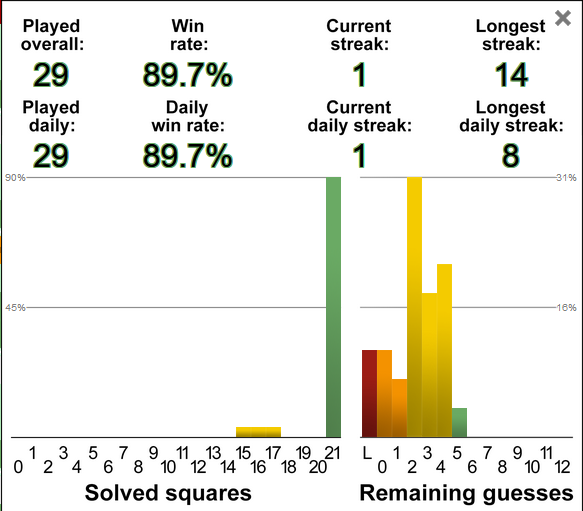 When I first tried Squardle, my recommendation to the Discord group was "This was insane!" It's some kind of cross between Sudoku and Wordle, where you need to guess 6 different words arranged in a grid.

This one is the most mentally challenging among the variants I play. For the others I can usually just power through, but with Squardle more than once I've had to stop and resort to pen and paper or such in order to figure out some of the words. It still has a better win rate than Saltong Mini, Dordle or Quordle though, most probably because I took it more seriously!

Also, this one added their stats very late, so even though I started playing it in February, I only have less than 1 month of stats.

I did manage to try some other variants over the last few months (I did actually try Octordle for a while), but these were the only ones that stuck around as daily habits for some reason. I guess it's because there's a cognitive limit in terms of how many of these small daily puzzles I can do, and probably the current set has a decent mix of easy to difficult puzzles that satisfied my daily puzzling needs.

Wordle was an interesting phenomenon, practically a throwback to the old web when people built web things just to share joy to other people. Probably the best thing spawned by the internet so far this year. Thankfully it's still going strong, despite the NYT purchase.

I'm ending my daily runs, but that doesn't mean I'll never play any Wordles again! Maybe if something interesting happens or a new interesting variant comes out, etc. But for now, I can let go of that daily internal reminder to "do my Wordles" and repurpose that energy elsewhere.