A Couple Of Word Games

I've mentioned this before on the weeknotes, but a couple of months ago I availed of a New York Times games subscription, mostly for access to the NYT crosswords, since the trivia team have been enjoying some coop crossword nights over Discord.

Aside from the NYT crossword, the subscription also gives us access to some other games. The other one we've been enjoying so far is the NYT Spelling Bee. 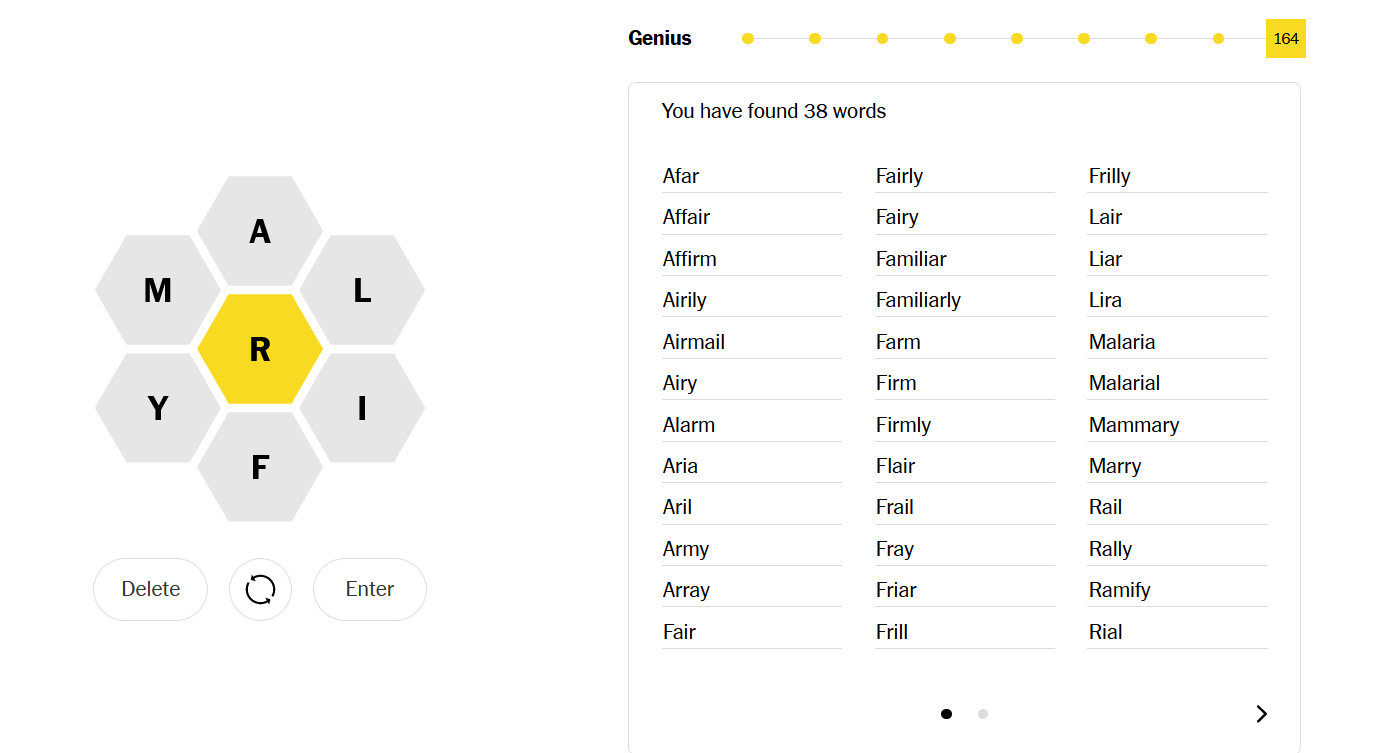 A Couple Of Word Games - spelling-bee.png

It's basically one of those anagram puzzles where you have to form words from a set of letters. Each puzzle has seven letters, with one letter highlighted in yellow in the center. A new set of letters is provided per day. Minimum four letters per word, you can repeat letters, and each word must use the center letter. Earning words gives you points, and the more points, the higher your rank (shown at the top of the right half of the screen in the above screenshot). The highest displayed rank is "Genius", at which point the game prompts you whether you want to keep playing. The highest possible rank is "Queen Bee", an unlisted "easter egg" of the game, and is only attainable once you find every possible word for the day's puzzle. If you're having trouble, they also recently provided a hints page that

The game is entertaining, especially when doing it as a group (I do manage the occasional Queen Bee by myself though!). Getting to Genius is relatively easy as long as you have a reasonable vocabulary. Getting to Queen Bee is almost always a challenge - they always seem to have one or two obscure words up their sleeve, often it's a term for like a plant or a bird or such that we've never heard of. At least our vocabulary is expanding! You get to see the answer list the next day when the new puzzle rolls in (around 4PM at GMT+8).

Unfortunately the Spelling Bee isn't available for free - if you don't have an NYT games sub, it only lets you guess 3 words per puzzle.

Another word puzzle I found just last night is Wordle, which I think is a bit new. It's another daily puzzle that's basically a variant of the old Mastermind game, but instead of random colored pegs, the answer and each guess has to be a valid 5-letter word. The letters in your guess are highlighted either green (right letter, right position) or yellow (right letter, wrong position).

A Couple Of Word Games - wordle.jpg

I've only done the one puzzle shown above, but I found the idea clever; for each guess you have to think of a valid word that maximizes that particular guess. I failed to do this with the "OCCUR" guess above, as it was unnecessary to guess a second C. Also I used an extra guess because I didn't think I could repeat letters! It would probably also have been better to start with a 5-letter word that had the most common letters, maybe STARE or STALE.

Anyway, I'm generally a big fan of word or anagram based games. Send any interesting ones you find my way!

I’m surprised no one has mentioned Word Wow! where you construct words made of three letters (and that’s limited) or more to destroy tiles (and no, it’s not Bookworm, but I guess similar) The more words made, the more tiles are wiped away to enable the worm to continue it’s journey to the bottom of screen. I’ve been playing this game for at least five years now and LOVE it! https://wordmaker.info/how-many/couple.html'>couple