Random high school memory: I think it was in second year physics class maybe, we had an exercise / contest where we were required to create a rubber-band powered car from a plastic bottle. We didn't have the internet back then, but if we did, we could have easily Googled "rubber band powered car" and got a good sense of what the car was supposed to look like: you attach four wheels to the bottle then make a twisty thing with the rubber band to propel it forward. Indeed, all the other teams did their rubber band bottle cars this way.

Unfortunately (or fortunately, as the case may be), I had a tendency to uh, "think outside the box", so I somehow convinced my team it would be easier to make the bottle itself a wheel, with an extra wheel on the outside, and the rubber band would be inside the bottle. I forget how exactly we set up the rubber band. The entire contraption looked a bit like a paint roller: 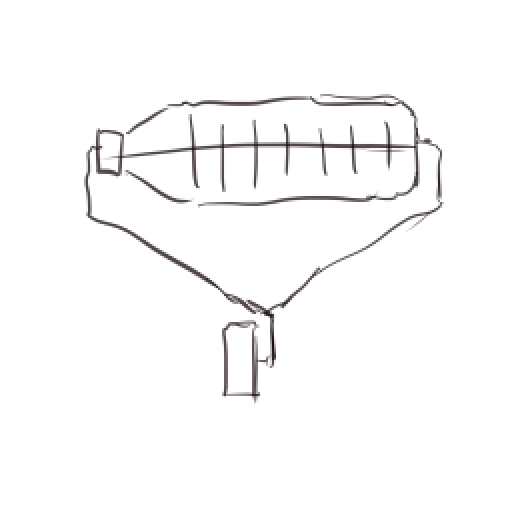 Then basically we wind the whole outer frame around the bottle, set it on the ground and let it go! I don't think I had any actual basis in physics for this weird design to work but it actually did! More or less... Since it's kind of asymmetrical, I believe in testing it we found that our car kept turning in one direction. We kept tweaking it until the final check.

The final test for this exercise was the teacher set up a narrow ramp about a foot and a half wide and 6 feet long and angled at maybe 30 degrees. Each team's car would need to climb up this ramp, and there were markings at certain distances; how far your car got up the ramp determined your grade for the exercise. I believe our car didn't make it all the way up, it veered off to the side before it could get there, but we were close - I think we got a grade of 1.5, two steps lower than the highest possible grade of 1.0. I think a lot of other cars didn't make it to the top either anyway.

Not sure why my brain decided to remind me of this now, in the early hours of the morning no less, but it's an amusing reminder of how I've always had the tendency to think differently than the norm.

👍 Eric 🔁 Adrian Cochrane
If you enjoyed my content for some reason, I'd love to hear from you! Here are some options: