Review: A Stack of Comics Review: A Stack of Comics - stack_of_comics.jpg

Early this year, someone gave me a stack of them. I decided to go through them about a month ago after the last book I read, taking up my regular book reading slot. These aren't even the most well-known ones like Calvin and Hobbes, Dilbert or Foxtrot, most of these I hadn't heard of before. I don't think they've ever been syndicated to newspapers here; if I hadn't gotten them for free, I'd have never heard of them. Also, these books were published in the mid-aughts, so they're all at least a decade old.

I figured I'd write about them and also add them to my list of books read for 2021. It feels a bit like cheating, as if comics aren't "real books", but they are, aren't they? With stories and narratives and all, just with more pictures than the usual idea of what a book is. On the other hand, a bit of a slippery slope, since I also tend a few superhero comic books each week, so maybe I should be counting those too? Whatever, it's my list, I'll do what I want.

Published 2008. This was the first one from the stack that I read, mostly because it was the only comic strip I was aware of before I got this stack. That was mostly because I ran across the cartoonist on Twitter around the time the pandemic started and started following him. His strips at the time had a lot of social commentary and meta-humor, perhaps a product of what the world was like then (and still is, now). This collection is from a much earlier time, and has much less social commentary, focusing mostly on the antics of the cast - anthromorphized animals living in American suburbia. The collection was okay, but not as relevant as what made me follow the cartoonist on Twitter in the first place, so maybe I was a little disappointed.

Published 2005. This one is your run of the mill slice-of-life strip; it focuses on a 15-year old named Jeremy. It's one of those strips which has few jokes or tropes that they repeat a lot: parents are uncool, teenagers don't communicate, teenagers are messy, school is hard, etc. Doesn't have a lot of continuity, so mostly one-off gags. I did enjoy some strips enough to scan a couple of them:

Review: A Stack of Comics - zits1.jpg

Review: A Stack of Comics - zits2.jpg

Published 2008. Like Zits, this strip is about a teenager, but this time the teenager is a female. There is a stronger focus on feelings, crushes, relationships, misunderstandings, that kind of thing, and a lot more continuity, longer story arcs and such. All of that means this one was much less interesting to me (and probably objectively less funny).

Published 2005. More words below, since I had two books of this strip.

Get Fuzzy: I'm Ready for My Movie Contract by Darby Conley

Published 2007. Get Fuzzy is about a guy living with his cat and dog, except in this universe the cats and dogs and other animals can talk and read and write and such, but they're all still pets. It's basically Garfield, except the cat is a self-centered misanthrope and the dog is kind of a blubbering idiot. Wait ok, I guess that's basically Garfield. Except with a lot less lasagna. I did find it a bit funnier than the previous strips, so it's good that this was the one with two books. There was no real difference between the first book and the second. 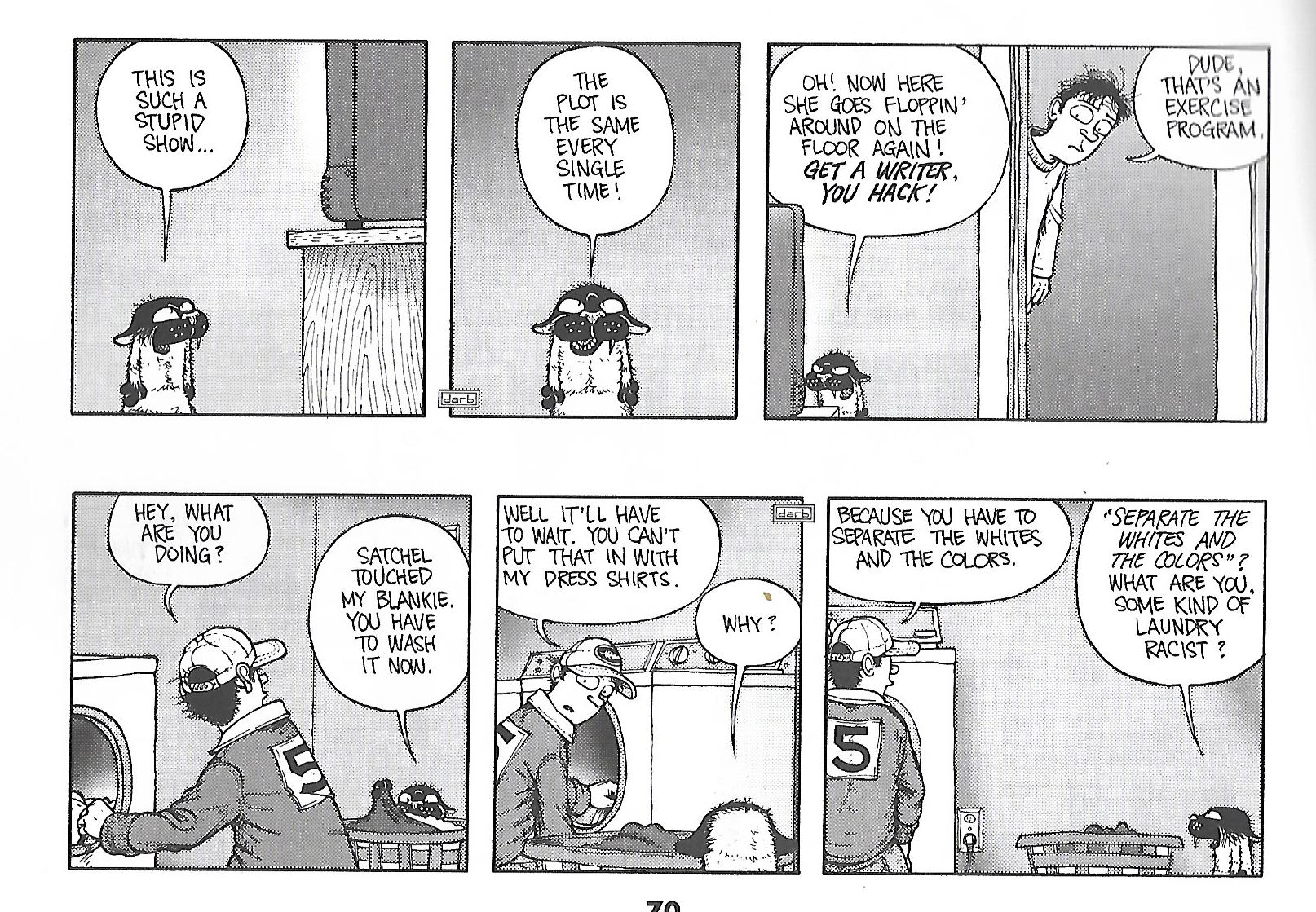 Review: A Stack of Comics - get_fuzzy.jpg

Published 2010. This was the most recently published of the bunch. The collection was also huge, a bit over 200 pages (the rest were around 120 pages each) and had better quality paper too! This is a semi-autobiographical slice-of-life three-panel strip by an African-American cartoonist that supposedly deals with political, social and racial issues, but I didn't actually find a lot of those here. A lot of the strips are gags about mundane things like spiders, food, shopping, music, sports, that kind of thing. There were some strips that covered political or racial topics, but not enough to stand out, I guess? Actually, despite this collection having a lot more strips than the others, nothing really stood out for me here. I guess I'm just not the intended audience.

That's it for now. The stack actually also had a book about Family Guy, but it wasn't comic strips, had a bunch of prose, wasn't really interested. And also a comic version of A Christmas Carol, again, no interest, maybe if it were Christmas? Now that I've gone through the stack, I can put these books on a shelf or on a box or maybe give them away or something? I do know I have some other comic strip collections people gave me that I haven't read, lounging somewhere on my shelves, so maybe there'll be another edition of this kind of post at some point. (Feel free also to donate to me any old comic strip collections, or any books really...)