During a company holiday party in the mid-2000s our theme was "statement shirts" and I decided to jokingly go with a somewhat tight-fitting purple shirt with the caption "ROY TANG FOR PRESIDENT": 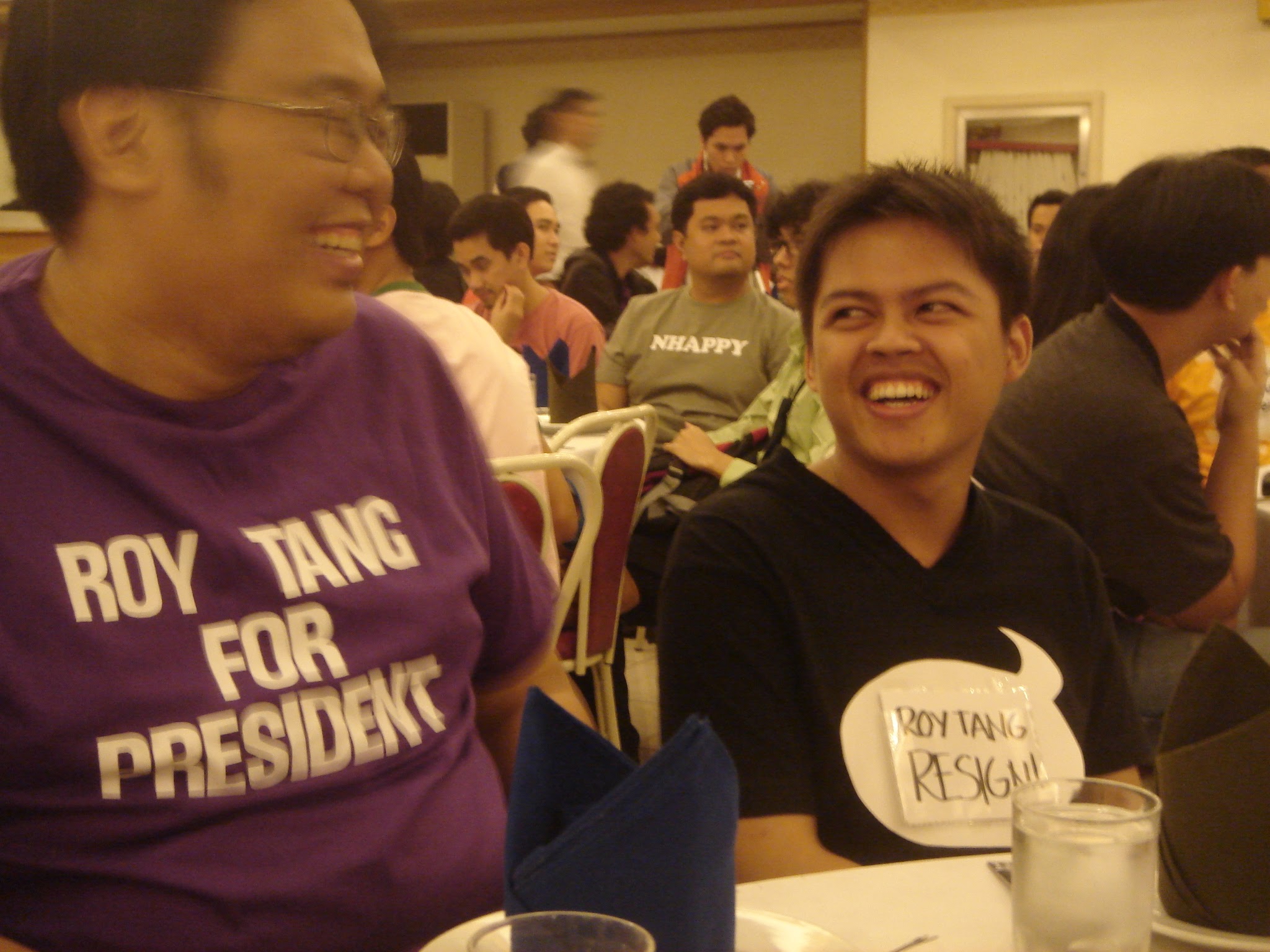 I'm not even running yet and I already have opposition!

(This was the best picture of the shirt I could find; It's probably still in the house somewhere, but it probably wouldn't fit me anymore.)

Eventually, this phrase became a running joke among my friend groups, especially since I tended to be opinionated and to comment a lot on current events on social media and such. It was not uncommon for me to post some rant about something stupid our political leaders have done or some essay about how things could be improved, and someone would comment with the eventual "Roy Tang for President!"

It's a joke of course. Running for president requires some level of fame, political experience, connections and even ridiculous amounts of money. I'm a nobody who has none of these things. there's no way I'm running for president! That being said, I'm not going to claim I've never thought about it; it's the sort of thing that's fun to fantasize about once in a while.

It actually feels like a really insane idea to run for president. Being president is a terrible, thankless job. The country has so many systemic issues that it's simply a gargantuan task to address them all or even make a significant dent in a single term. Even assuming you're an honest, well-meaning person who just wants to do good things for the country, you're going to run afoul of so many vested interests who will stand in your way and try to take you down: politicians benefiting from corruption, elites and oligarchs profiting from inequality, the criminals and corrupt who want to evade accountability, basically anyone in power looking to preserve the status quo.

You can't run the country alone, so you have to be lucky enough to know or find people to work with who you can trust to be honest and well-intentioned and not abuse their authority. And because we aren't in a dictatorship, the president would often have to find a way to work with many different parties and sectors to get things (such as legislation) done, even if some of those people may be part of the very vested interests opposing you. You would have to do all of these tasks while constantly being criticized for your every move, and also managing public opinion and handling whatever random tragedy or crisis happens every week. And you have to find a way so that when everything is done, somehow the small gains you've made will be preserved and be built upon by future leaders.

And it's not a job with a lot of work-life balance; you don't step being president after 5pm. I can only imagine that once you decide to take on the job, you are basically committing six years of your life to the country, and not everyone has that privilege.

I was thinking about these things for the past couple of weeks as I read many of the testimonials given by people who've worked with the recently deceased former President Noynoy Aquino. By most accounts he was an honest, sincere person who wanted to do a good job. He was a data driven President and tended to work hard, often making his staff work late into the night and such.

He had some issues he had trouble dealing with, namely in transportation and crisis management. But his biggest problem was his lack of charisma and political savvy; he tended not to show emotion and he wasn't good at espousing his own causes or letting the public know how hard he worked or empathizing with other people. His political opponents capitalized on this and he was the target of bad propaganda, ending his term with him and his family name mocked and vilified by certain sectors of society. Someone I know called him a "misunderstood nerd" and I think it's a stereotype that fits perfectly - the sort of awkward person who knows how to do the work, but not how to effectively manage his relationships with other people and the public.

So hard work and good intentions are obviously not enough for the job. You also need charisma, political will and the savvy to navigate the cesspool of politics. With all of these challenges, it's very difficult to find truly good and honest people willing to go for the job of president. Most will be experienced politicians who are already compromised in some way, perhaps thinking they can still leave a good legacy behind; or worse, some will be the truly corrupt, who see the position as an opportunity to further their own agendas, whether that be power or enrichment or whatever.

And the scary part is that often, it's the bad ones who have the knowhow or skills needed to get elected, which means elections here will always be a challenge. Maybe someday we'll figure things out or just get really lucky and roll a chain of natural 20s and actually get a series of good presidents (or candidates even), enough to make some headway in improving the country, instead of the typical riffraff we find running for president.

In this country, there is a constitutional requirement that the president must be at least 40 years old which for me means next year's elections would be the first one where I would actually be eligible to run for president! The presidentiables are already starting to make their moves so I want to make this clear: I have not yet decided whether or not to run for president. (Lol.)

👍 Wayne Werner
If you enjoyed my content for some reason, I'd love to hear from you! Here are some options: