Over the past couple of years, I've been regularly playing digital boardgames online on Steam with one of my friend groups, I thought I'd do reviews of them.

My second review is about Scythe: Digital Edition. Scythe is a competitive game where you play one of seven factions in an alternate history post-war Eastern Europe. Players vie to control territories, hire workers, build mechs, accumulate resources, accomplish secret objectives, and other such goals. Accomplishing secret objectives, winning combats or maximizing one of the several metrics (workers, money, popularity, military power, recruits, structures, mechs, etc) earns you stars, and the game ends when at least one player has six stars. Having six stars doesn't guarantee victory, as points are then tallied up depending on various factors including stars, territories, money, popularity, and so on. Having separate victory and end conditions creates a bit of tension and a balancing act between progressing stars and earning points.

Players play as one of seven available factions, each with preset locations on the board. The board is preset and consists of hex tiles, each with different movement limitations and resources that can be produced. The board also has "encounters" on certain tiles, basically roleplaying opportunities where you get the choice of an action to take, typically trading one type of resource for another, usually a good deal, if you can pay the costs.

The board is fixed, but each player is randomly assigned a mat that determines the actions available during their turn. The mat is split into top actions (produce, move, bolster, trade) each paired with one of the available bottom actions (upgrade, deploy mech, recruit, build structure). During your turn, you may play one top action followed by the corresponding bottom action, and you cannot do the same action pair on successive turns.

This weird action structure makes the game challenging. Typically, the top actions generate resources, while the bottom actions consume them to advance your goals. If you get a mat with pairings that are poor for your particular situation, it may take a while for you to get into a regular rhythm of production to actually get anything done. Other players can also interfere with you by sending their character and/or mechs to attack or harass your territory or workers. I usually find that I need to plan ahead 2-3 turns to accomplish a simple goal like building a mech. Beyond the 3-turn window, who knows what the board looks like.

Combat is kind of straightforward - you can attack a hex with one or two combat units, and up to two combat units will defend it. Each side can spend up to 7 military power, plus play one combat card per unit on their side, each card adds 2-5 to your total. The attacker wins all ties, favoring aggressors. Due to the way military power and combat cards are accumulated, it's risky to initiate combat unless you have at least 14 military power (this ensures you have a fighting chance against a counterattack). Furthermore, each faction can only gain up to 2 stars from winning combats, so you want to make them count. In our games, we find that typically the winning faction will use two combats to try to earn 2 stars in one turn and end the game, and often those will be the only combats that happen in the entire game. Not sure if we are playing this optimally!

Games tend to go at least an hour long, roughly 20 or so turns in our experience. Because of the game's pacing and action structure, you can have games where it feels like I haven't accomplished much by then. Usually this creates a bit of snowball effect as well - the player who gets his act together earlier will tend to pull ahead and be difficult to catch up to. I'm not sure if there's a comeback mechanism we're missing.

The display is literally just the actual board, and the camera can be a bit finicky sometimes. In my last game I accidentally rotated the view and took a minute to figure out how to get it back. The UI is also fairly sparse and a lot of information or options can be hidden in the weirdest places. Like, figuring out where your faction is allowed to cross rivers can be challenging for new players. I've attached some screenshots to this post, but they're nothing special.

This is probably just relevant to my playgroup, but because of the slow pace, we tend to play a second metagame on top of the endgame scoring, where we consider the player who has spent the least amount of time on his turns (as seen via the turn clock) as "winning by time".

Among the digital board games we've played, this is the one where we have the least amount of playtime. Unsurprising given how slow the pace is and how difficult it is. For this reason, I think it's difficult to recommend to any boardgame newbies. 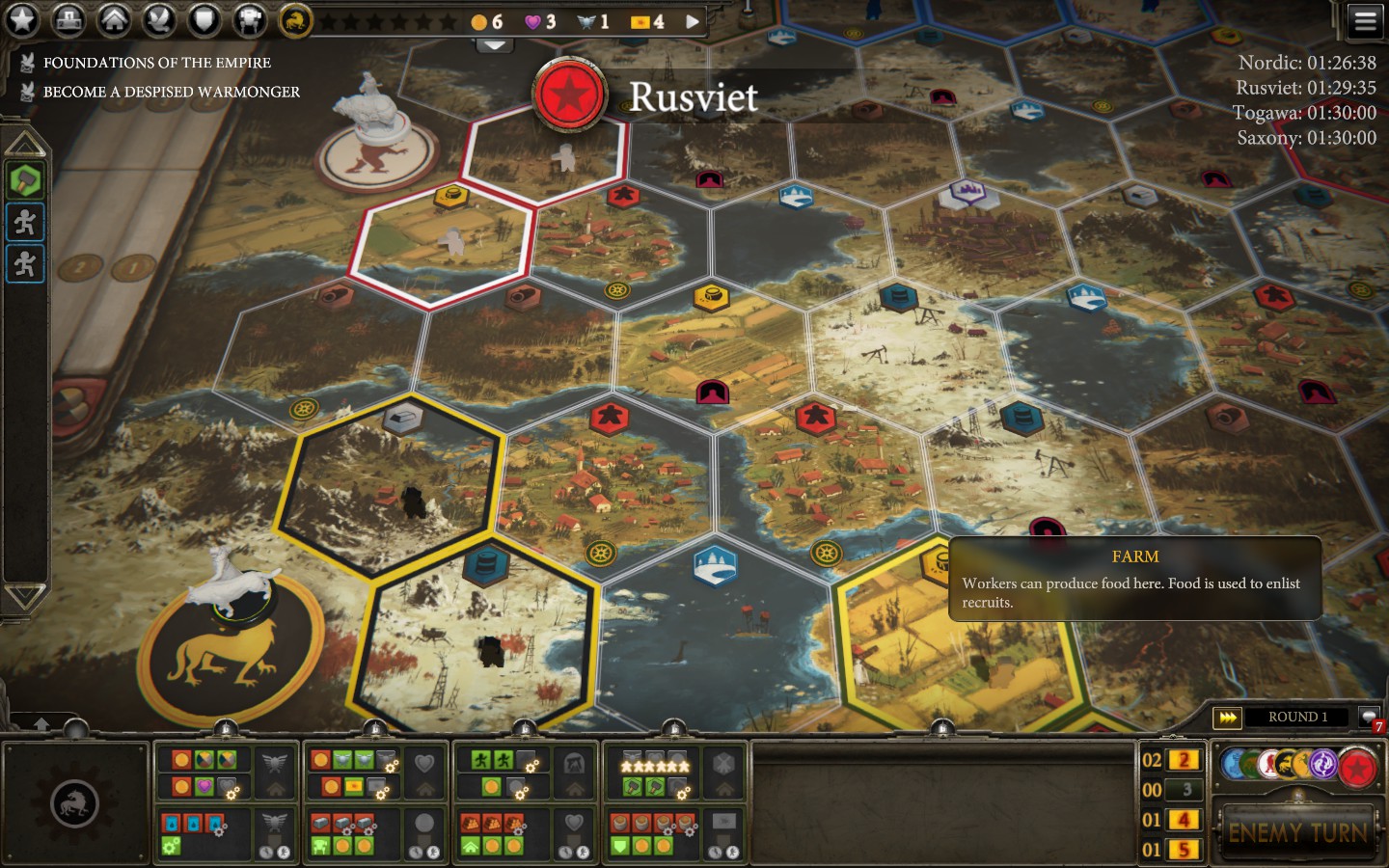 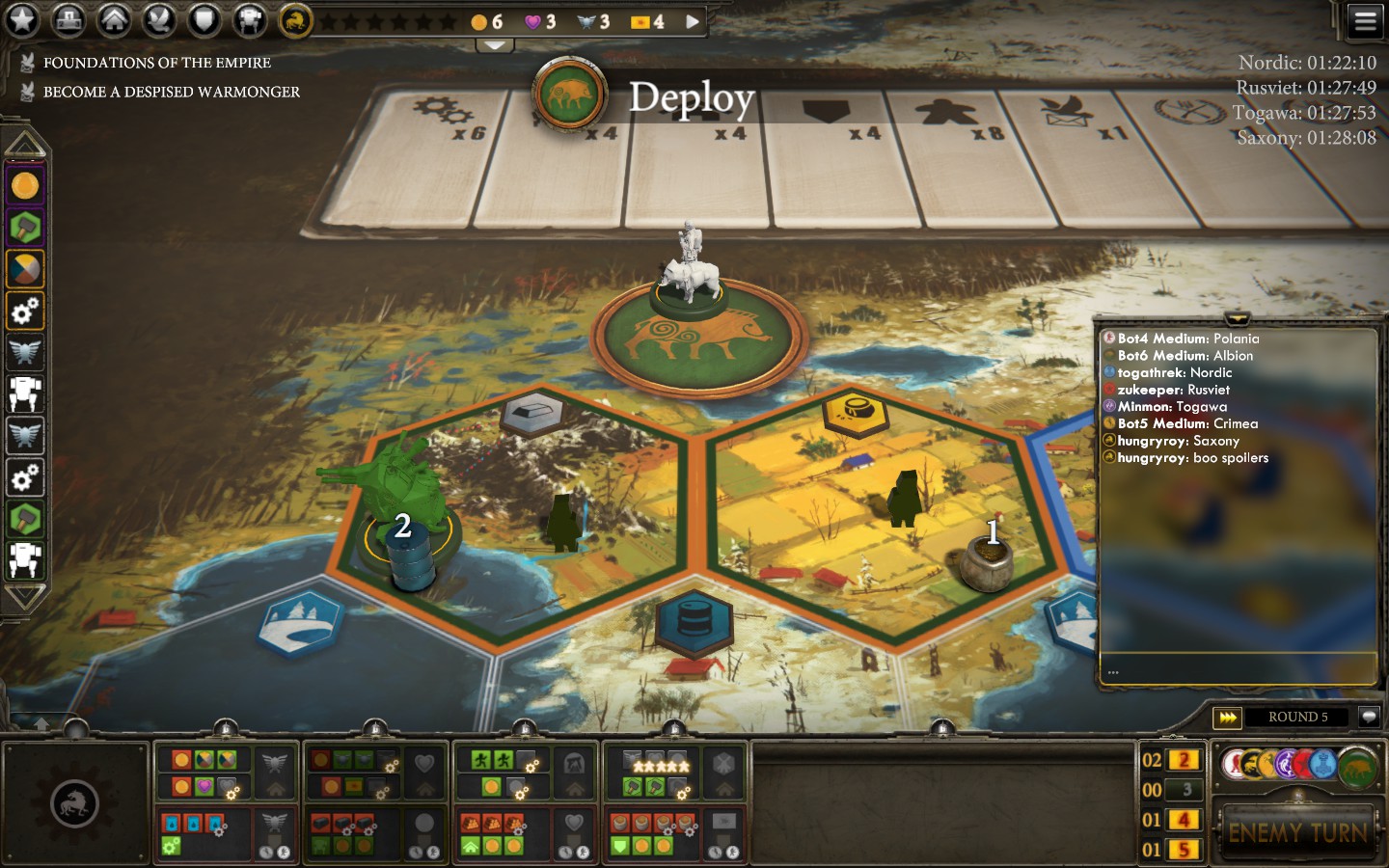 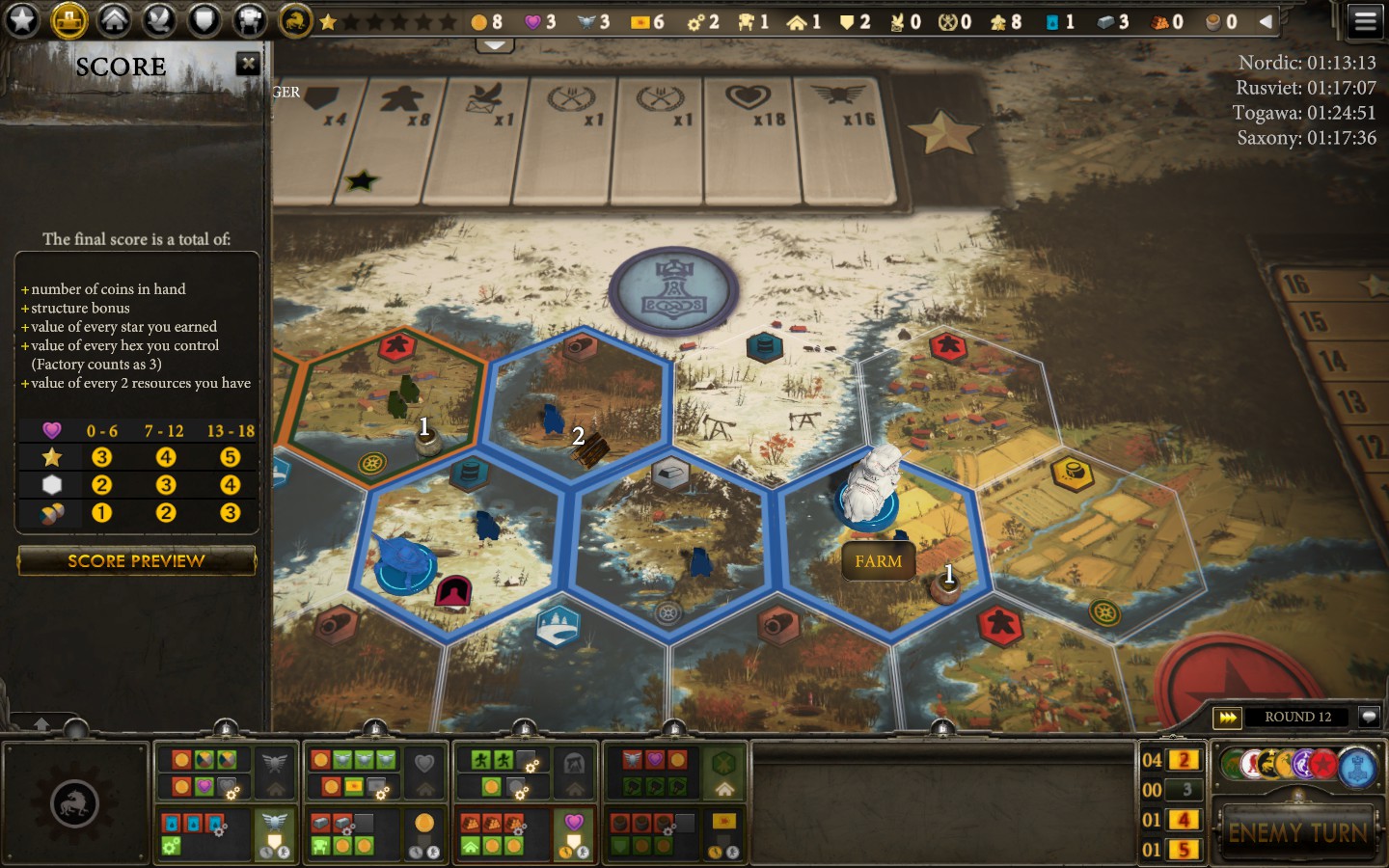