When someone shows you who they are, believe them

It's a bit interesting, this mentality of "I can't trust this person because they appear to be a goody-goody do-gooder, they're probably fake or have ulterior motives!". I'm no psychologist, so idle speculation thread:

So, apparently they DO message! 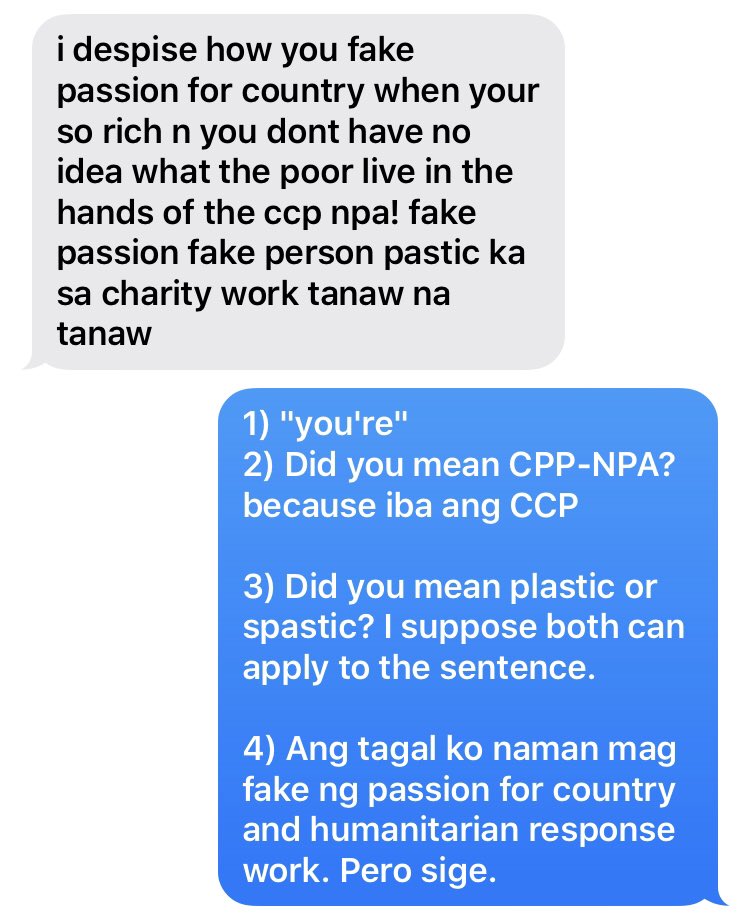 When someone shows you who they are, believe them - 1_EZ5KrVIUEAAmvE5.jpg

It makes you wonder what kind of trauma this person must have experienced in his life, to automatically mistrust people who present as good people; were they betrayed by some person who initially presented as a good person?

(IDK Gang Badoy personally, but from what I've seen of her public persona, she hasn't been anything but a decent person.)

I assume it's this same crowd that had a backlash against the "disente" push of the last admin (as if being decent was objectionable) and related more to one who presented himself as a thug since they find him more relatable somehow?

This mentality perhaps speaks to a pessimistic belief that people are inherently bad anyway, so anyone who presents as "good" is a lying faker, and might as well support the ones who present as more "relatable" yet flawed?

It might also reflect on the person's view of himself: he might have a poor self-image or sense of self-worth and projects that to everyone else, hence why he relates more to the problematic people.

Personally, I find it easier on my own sanity to just judge people by their words and deeds, and not by whatever imaginary motives I may ascribe to them. If a person is doing good, then you can assume they are a good person until proven otherwise?

Correspondingly, if someone jokes about rape and murder or makes light of human rights or favors a foreign aggressor, you can judge them by that too. No need to imagine motives beyond what you see and hear.

"When someone shows you who they are, believe them"

(Disclaimer: this is not to say that one should automatically trust any person who presents as good, just not to unnecessarily assume false motives; use your common sense.)