This is a follow up to my previous posts about my 2019 PC troubles.

I was still encountering game crashes even after reinstalling the OS, so the most likely culprits now were either the video card or the power supply. I sent the video card over to my brother for him to test on his PC to see if he encountered the same symptoms. Sure enough, he couldn't even run the 3DMARK Time Spy test without immediately crashing, which was the same when it was on my PC.

Since then I've been running on onboard graphics only, which luckily could still handle things like Starcraft II, Magic Arena and Eternal. Oh, and I had to live on a single monitor, like a savage!

I began canvassing last month for a new video card. I didn't want to get anything super expensive, so I thought I'd keep the budget under 10k PHP (around $200). I also have a preference for NVidia/GeForce since the one time I tried an AMD I had an overclocking issue and had to replace the card within a couple of months (this was almost entirely my fault though!).

Given that, the best (most recent) NVidia card in my price range was this year's GTX1650. Unfortunately, reviews said this was not good value for money, as it was comparable in performance to the older and slightly cheaper AMD RX570 card. I also looked at a couple of cards above my budget line, namely the recently released GTX1650 Super and GTX1660 Super. The price difference between the two wasn't too high, so I figured the 1660S was a better deal overall, but it was around $100 more expensive than the RX570.

So the choice now was the cheaper RX570, which would be an upgrade anyway over my old GTX 970, or the more expensive GTX 1660 Super. Getting the more expensive card was a bit more future proof, but the problem is that this rig overall is already going on 4 years old, so I might need to upgrade everything again in a couple of years anyway. I figured it was better to get the cheaper card first then decide a few years down the line whether I needed a complete refresh.

Unfortunately, when I checked my nearby PC part stores, neither the RX570 nor the GTX1660S were in stock. (The first one due to high demand, the second due to maybe being too new?). Against my instincts, I decided to just order online from Lazada.

I'm not yet a fan of buying electronics online in the Philippines. Online purchases for me are fine for digital products or physical things that are relatively cheap. But for expensive electronics, I have some anxiety that there's so much that could go wrong. And I had some friends with bad stories about shady/sloppy Lazada sellers too. I also prefer getting my components from a store because (a) I don't have to wait for delivery; and (b) I can ask them to test the part right there and then to make sure no issues before I bring it home.

In this case I had no choice, so online it was. Luckily, I found that one of my nearby PC part stores EasyPC was also a Lazada seller, and they had RX570 in stock online. I settled on a Gigabyte 4GB RX570, then waited the requisite number of days.

The package arrived yesterday, a day earlier than predicted. I unboxed it and set about installing the card. I have some anxiety as well about installing PC parts myself, as I'm always worried that I'll do some damage via static electricity or my sweat dropping down into the PC case or something like that. But this time went smoothly. These new video cards are nice because they have back plates making them easier to grip. The only problem I encountered was that I didn't have an extra screw to pin the card unto the back of the case (I'll get one later).

Anyway, plugged the card into pci-e, connect the 8-pin power connector, plug in both monitors, then boot! Success! I got my 2nd monitor back!

I installed the latest AMD drivers, then to verify everything was fine, I ran the 3DMARK Timespy benchmark test. The test scored my system at around 3600+, which wasn't too bad. Comparing to results using my old card and the same CPU, those scores were around 1700+, so there's a significant improvement. With the 1650, it would have been 3600+ as well. The results said I'm only better than 19% of all results, but that's ok, I'm not looking for super high end graphics at super high resolutions and I rarely care about framerate.

Next were the game tests! 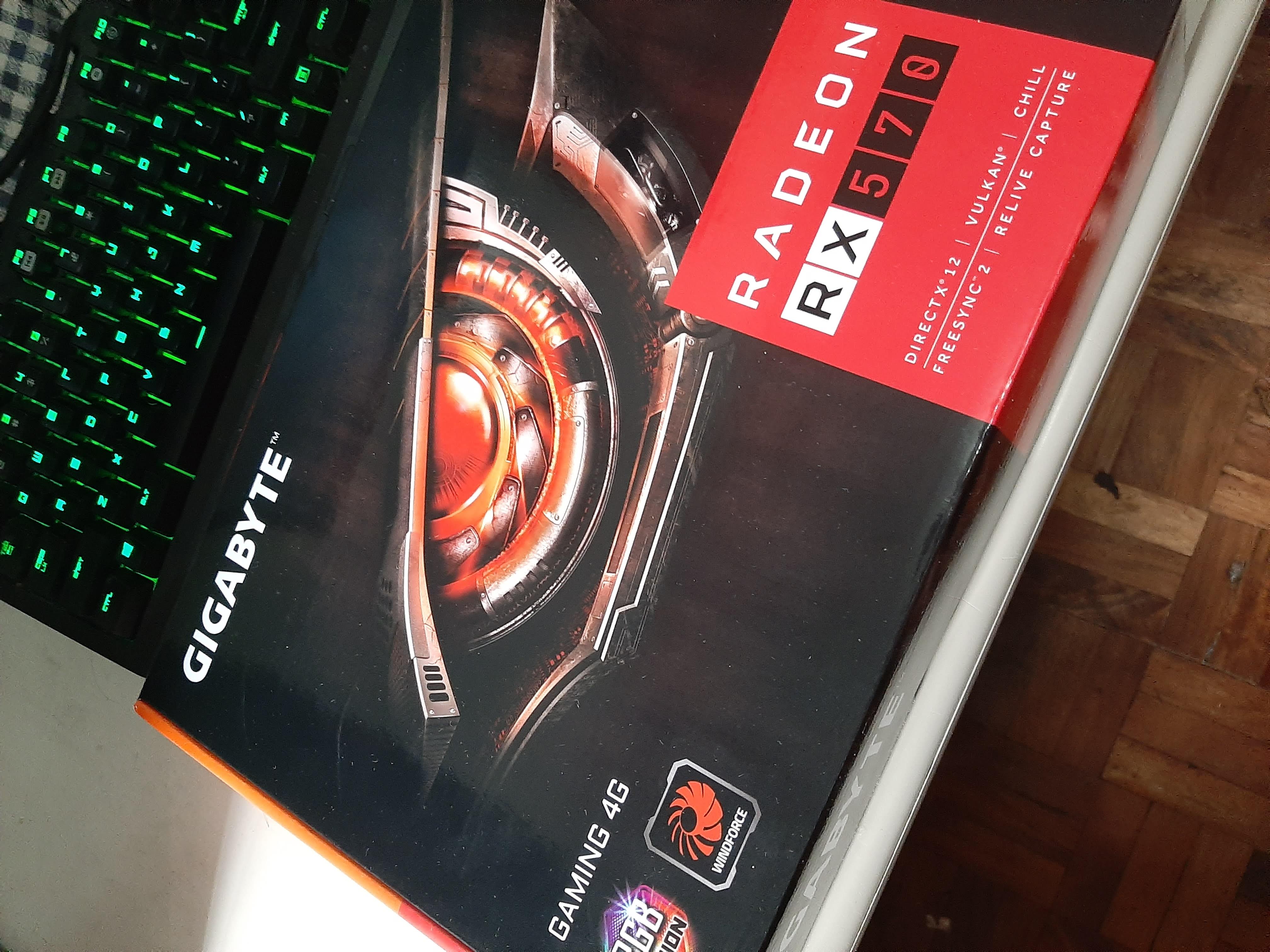 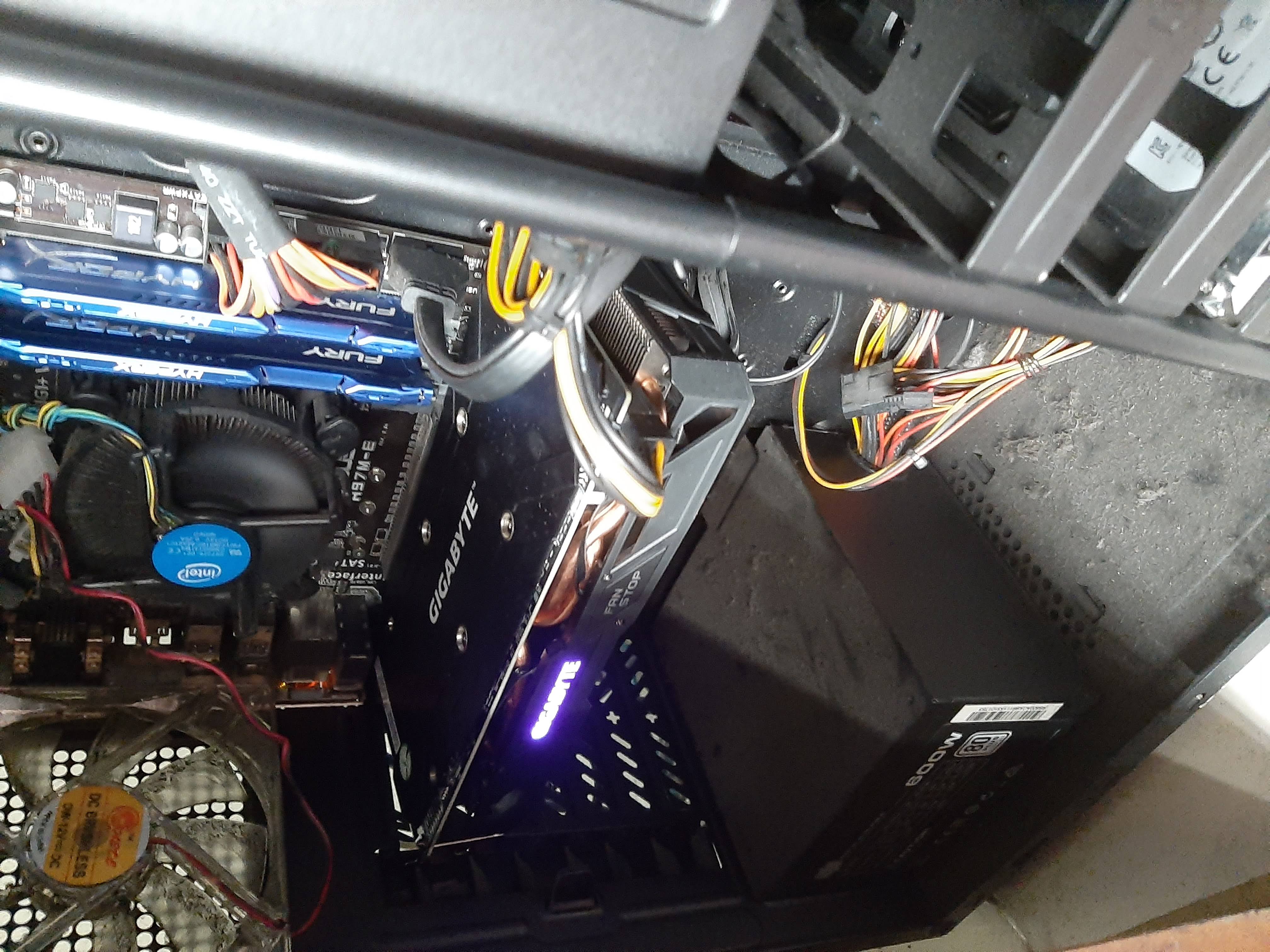 The card glowing after installation inside my super dusty case (I will clean it out someday soonish!)