I am, admittedly, a grammar nazi.

I think it's something that comes with being a voracious reader, especially as a child. When you have been reading (and speaking) English so much from an early age, you come to have an instinctive grasp of what is and what is not proper sentence construction. Some sentences just look right and some just look wrong. I'm not saying I have perfect mastery of the English language or anything. But I am for the most part capable of proper sentence construction. I like to think that being a programmer (or at least, a good programmer) correlates with a tendency towards good grammar as well, given how the syntax rules of programming languages are even stricter than the rules of English grammar.

Even if don't speak up, I reserve the right to silently judge someone for poor grammar. Filipinos are notorious for judging others based on how good their English is: 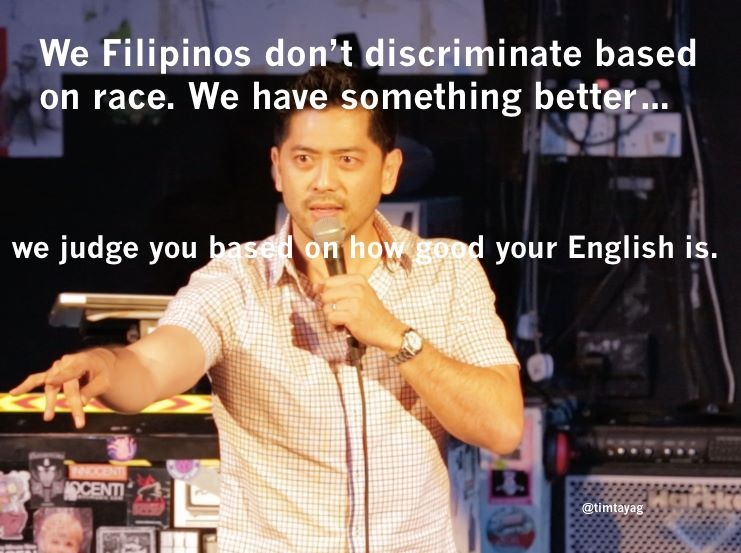 It is mostly an elitist thing - English grammar isn't something the poorer or less educated citizens will be super familiar with (although most Filipinos will still understand rudimentary English of course... I think... ). Speaking good English is often seen as a sign of privilege. I imagine even foreigners make some judgments based on how good your English is; I imagine that my US Visa interview might have been a bit more difficult if I wasn't fluent. That being said, it may be a thing that's on the downturn, given the recent rise of anti-intellectualism locally (or is it really recent?)

I will still often correct friends and family though. The people who know me well know that it doesn't signify any ill will or malice on my part, just a lingering obsessive desire for correct grammar. It's the same way a slightly misaligned painting hanging from the wall would bother other people (okay, that would bother me too).

In conclusion: I had to review this post a few times to make sure I made no grammatical errors, that would be embarrassing.