I picked up Slay the Spire during the last (Winter) Steam Sale, not really knowing what I was getting into. I had heard some good things, but I didn't really know much other than it was a roguelite where I had to go through a dungeon. But it was cheap so I took the dive.

I was pleasantly surprised to find that not only was it a roguelite, it was also a deckbuilding game! I love deckbuilding games, they often generate a significant amount of variance that translates to fun, and pairing that mechanic with a roguelite meant each run would be pretty interesting.

So in Slay the Spire, you choose a character from three choices, each of which have a different set of powers and cards. You go through the dungeons, one room at a time. Each room might have an enemy, a treasure or a random event. The map for the entire dungeon act is available ahead of time, so you can plot your route as needed. 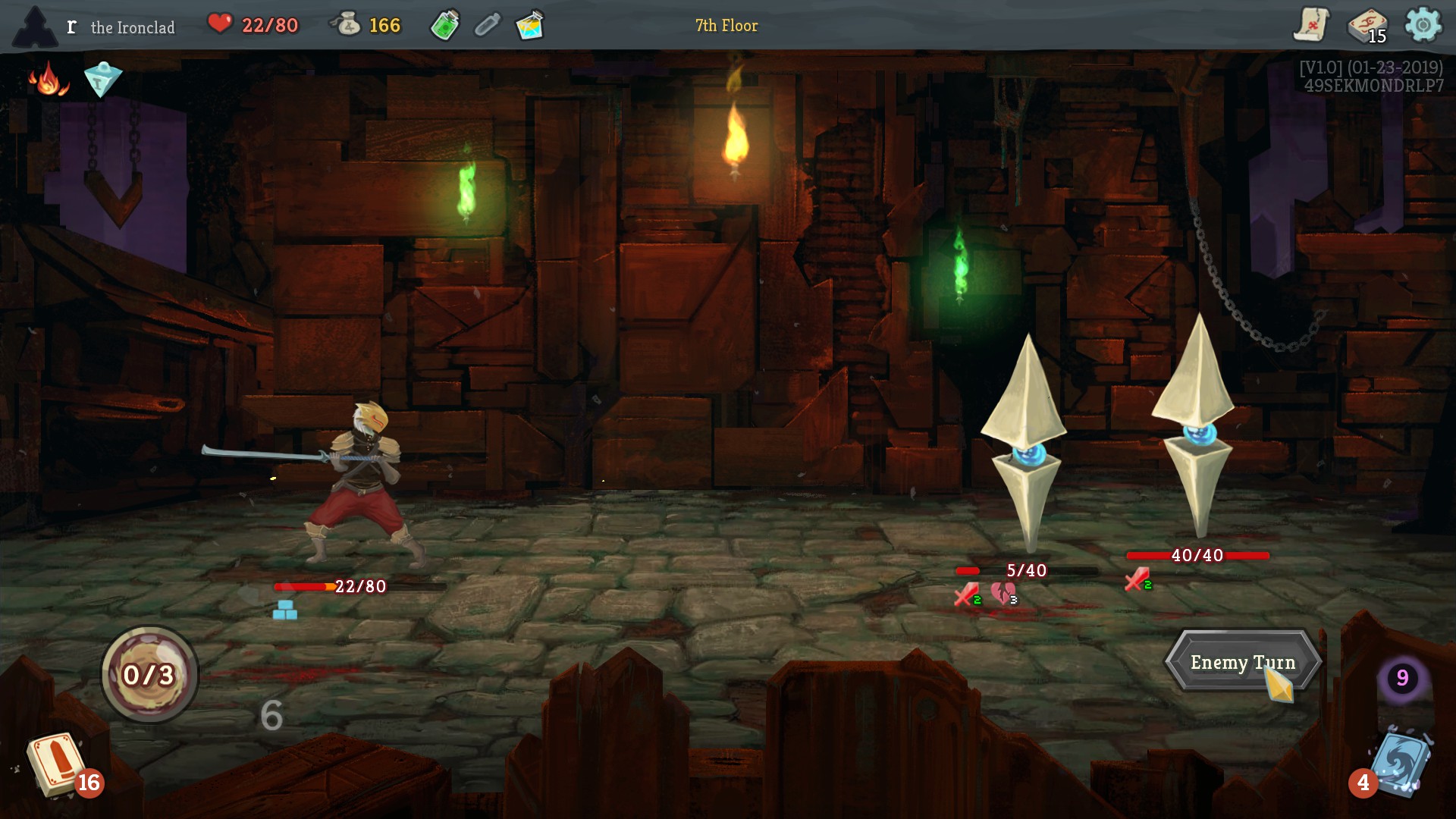 Your character is equipped with a deck of cards that includes attacks and blocks and powers. Along the way you can add new cards to your deck by defeating enemies or opening chests or buying from merchants and so on.

There are three available characters to play (as of now), and they offer pretty different play styles. There's the Ironclad, who's kind of a straightforward attack and block kind of guy. There's the Silent, a rogue who prefers chaining multiple attacks or using poison. And there's the Defect, who summons persistent orbs that perform various functions. The dungeon proceeds the same way for each class, but they have different card sets to choose from so battles often play out differently, and each character has different builds you can lean towards to increase your odds of a successful run.

Battles proceed in a turn-based manner. You draw some number of cards from your deck and each turn, and play as many as your energy allows. The unique thing about Slay the Spire is that during your turn, you can see each enemy's intent. That is, you can see what the enemy will do next turn, more or less, via an icon over their head (see image). This means every turn is sort of a mini-puzzle: what are the cards I need to play to minimize the amount of damage I take (always your priority, since taking too much damage endangers your run) or should I try to avoid debuffs or can I maybe already beat the enemy this turn?

It all plays out in the framework of the spire, the dungeon you're trying to conquer, with the map being randomly generated rooms. Every room presents choices: which card to add to your deck? Which card to remove? Should I risk some HP to gain a relic? And so on.

It's all very fun, and quite challenging. It can also be frustrating, but since the game gives you near perfect information (you even know at the start of a floor which among a set of bosses you are going to be facing at the end of the floor), any deaths are always at least partly your fault.

I tend to wait until I've "completed" games before I review them, and for Slay the Spire I did manage to finish a run with each class at least once. But I've only scratched the surface, there's a ton of content beyond that. I haven't even gotten the "true ending" yet, which only becomes available after beating the game once with each class, as the "true ending" boss is quite difficult. And even beyond that there's special cards to unlock, daily challenges with different parameters, and even an endless mode I haven't tried yet. I also hear that the devs are very diligent and add content on a regular basis.

Slay the Spire recently went "live" and left Early Access, just last month, and they're planning for a Switch port too. The one disadvantage of the game for me is that each run takes a considerable amount of time (You can actually quit at any time during a run and resume it later, but I always feel compelled to finish each run in one sitting), and I have a lot of other games to play. I'll still probably revisit the Spire from time to time, but frankly trying to "complete" the game, Steam achievements and all, seems like a huge task, given the large amount of variance in the game, but maybe I'll get there someday.