I had been eyeing Lucas Pope's acclaimed indie hit Papers Please on Steam for a while, but finally bit the bullet on it during the last sale. The story of the game itself is interesting, as Pope was more or less a one-man team, doing the design, code, music and art for the game himself.

If you're not familiar, the game places you in the role of a border inspector in a fictional 1980s totalitarian state called Arstotzka, a thinly-veiled parallel to communist East Germany and similar nations. As border inspector, you're charged with inspecting the documents of people who want to enter the country, and your meagre salary depends on how many people you are able to correctly process in one day. The day-to-day gameplay tension is between your need to process as many people as possible so that you have enough to pay rent and feed your family; vs your desire to avoid making mistakes. Mistakes often come in the form of allowing entrants with discrepancies in their papers to pass through unchallenged, and making multiple mistakes in the same day is painful for your salary and endangers your family members. 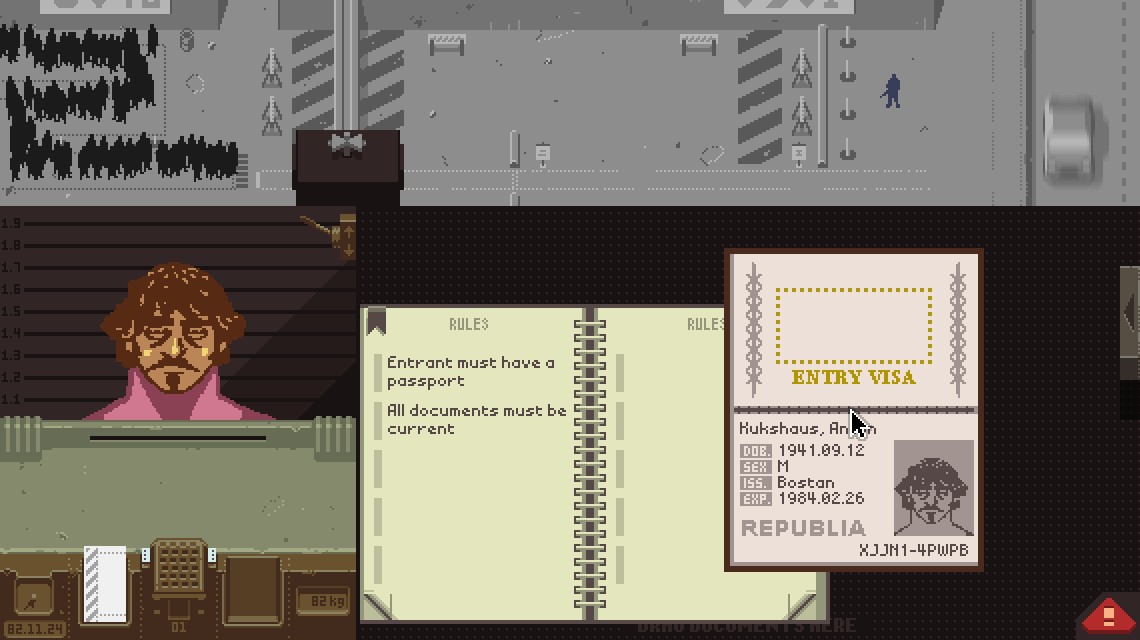 The gameplay is mostly attention to detail. At the start of a run, you only have one or two documents per entrant and it's relatively simply: make sure their passport photo matches their appearance, make sure the passport isn't expired, make sure it has a valid issuing city, etc. As the days pass, the Arstotzkan bureaucracy imposes more requirements upon entrants, making your job considerably harder. Towards the end of the story mode's 31-day period you'll be checking 4-6 different documents per entrant, making sure all their papers are valid and all the info on each document matches the others and so on. It has an element of tediousness reflecting the actual job you are doing, and yet is strangely engaging.

The story mode is fairly good, and it finds you dealing with challenges like smugglers, refugees, bribes, forged documents, a nosy press, and even a group of rebels plotting to take down the fascist Arstotzkan government, and the occasional terrorist attack on your booth. There are a number of endings, you can choose to play it straight, do your job as ordered and not support any criminal elements at all, and you and your family will live your same life in Arstotzka. Or you can risk everything by helping dissidents and refugees and criminals, and in the end you have to find a way to escape your homeland with your family. Or you could make the wrong decision at some points, and the game will end earlier than expected. Many of the noncritical entrants are randomly-generated I think, but the story-critical ones are preordained to come at specific times.

The nation-state of Arstotzka is surprisingly efficient in some ways - if you make a mistake such as letting through an entrant with an invalid passport, you are immediately issued a citation (something you come to dread in the game). So somehow the bureaucracy is able to know what is happening in your booth - yet they are unable to detect your interactions with the dissidents and some of the criminals.

Achievements: The game provides an autosave each day you complete, and you can resume from any of the previous days, so that's helpful for achievement hunting. I didn't bother going for achievement completion yet though, as the remaining ones I missed seem to require too much backtracking, and there's other games to play.

The game was a good buy, and perhaps even still a bit relevant in the modern world, despite it's 1980s setting.