Site Migration from Wordpress to Hugo

At the same time, while reading across some blogs over the past few months, I had ran into the idea of static site generators, which intrigued me as a Wordpress alternative. SSGs offered several advantages:

There's quite a lot of static site generators available right now actually. The most popular one seems to be Jekyll which is ruby-based. I first decided to try Pelican because I preferred Python over Ruby. However, it turned out problematic on my Windows machine, I encountered some interoperability problems with pandoc for the WP migration. I didn't want to have too many dependencies and issues with dependencies because I would later want to deploy the generator itself to my hosting on Webfaction for automated deployments, so I wanted the setup to be as easy as possible.

Then I stumbled upon Hugo, which offered two main advantages:

After reading up and testing a bit of Hugo, I had a fit of "I couldn't sleep, I'll just go ahead and do the site migration now" that I would later regret since it completely screwed up my sleep schedule.

I used the Wordpress to Hugo plugin to convert my Wordpress content for Hugo. Many posts had reported problems with this plugin, but I didn't have any issues with its basic operation. I had a two problems with it:

Since I had the source for the plugin, it was straightforward to fix both issues myself.

After getting the export from the plugin, I still had a bit of post-processing and cleaning up of the posts to do.

For one thing, all the single-quotes in the exported posts seem to have been converted to HTML entities for that smart quote thing, so I had to reverse that. Luckily, it was a simple find and replace across text files. The format for embedding posts such as Twitter, Youtube, etc was different as well, I had to correct those files one by one.

Cleaning up the taxonomies

I had always wanted to clean up the categories in the blog, but I never got around to it with Wordpress because I didn't feel like figuring out the SQL I would have needed to do it. (I've never liked Wordpress's table structure.). With Hugo, all I had to do was update a bunch of text files, which I was much more comfortable with. This involved simply importing a Python library to parse frontmatter, and a script to do the conversion.

Hugo doesn't have built-in support for archive pages, so I had to create them myself. I followed the setup described in this blog post and wrote a python script to generate the individual year/month archive pages.

A bigger problem was the archive listing (the page that would link to the individual archive pages). Because the blog has been running for 15 years, there's a whole lot, so I preferred to organize them in a table like this: 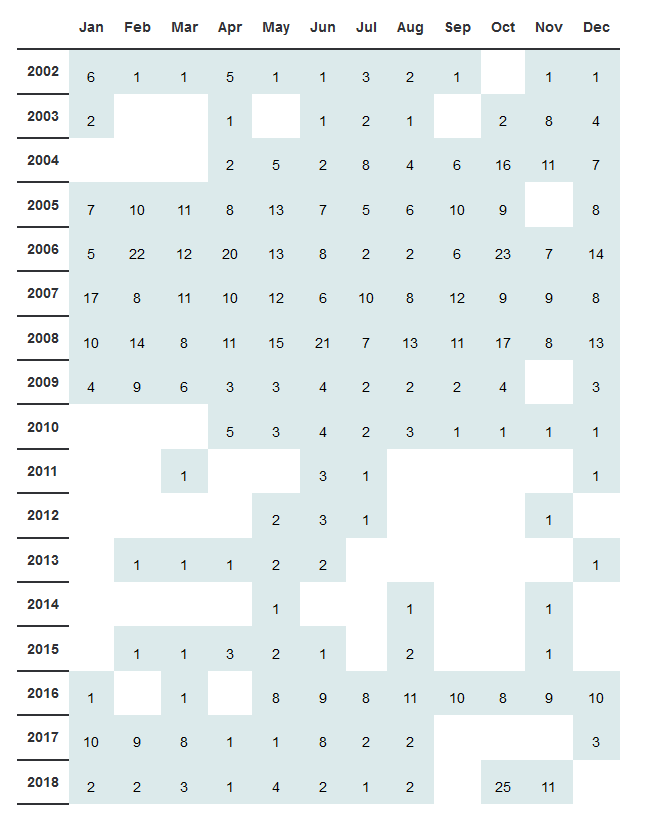 I actually couldn't find a decent Wordpress plugin that did this for me exactly, so I wrote my own plugin for this.

For Hugo, I struggled with this a while and was close to figure out when I finally got the approach right. CHeck my archives page for how it turned out. The upside is I got to become a bit familiar with https://golang.org/, particularly the way content is parsed and processed in Hugo templates.

I had some custom-formatted code in Wordpress that wasn't exported properly by the plugin. This required I create some new shortcodes for Hugo and replace the corresponding calls.

I wanted to minimize changes in the URLs of older content, so the permalinks for the old posts were kept in place. Another issue was the RSS feed, generated at /index.xml by Hugo, which I wanted at /feed/ so that feed readers don't need to be updated. A simple redirect in .htaccess was enough to get this done. I'm not much good at regexes, so I had to reference another blog post for this one. The RSS feeds for categories/tags has changed, I think that's fine.

I referenced another blog post for setting up automatic deployment. The main difference was my host was Webfaction while his was Digital Ocean, which did cause me a bit of trouble when I was trying to set up a Github webhook to automatically deploy on every push. It turns out Webfaction doesn't allow me to set an env variable in .htaccess to be read by the PHP script (as was in the blog post linked above). It took me a while to figure out this was the issue, so I just gave up on the Github webhook for now and just set a cron job to periodically pull and redeploy the site. I needed the cron job anyway, if I wanted to support future publishing and possibly some form of queueing later on.

Legacy comments from WP are imported directly into the markdown of each page. Future comments are now handled using Disqus. I already had a Disqus account before, I forgot why I stopped using it. That being said, outsourcing the comments makes a lot of sense.

I'm not much of a CSS/site design guy, I'm more a "find an existing theme and tweak it to your liking" guy, so I browsed Hugo's available themes for a while and settled on Hyde-Y, which I proceeded to modify a bit, adding a picture to the sidebar and so on. It's simple and clean and straightforward, nothing too fancy. Maybe I'll revisit the theme later.

For posterity's sake, a screenshot of the new layout/theme: 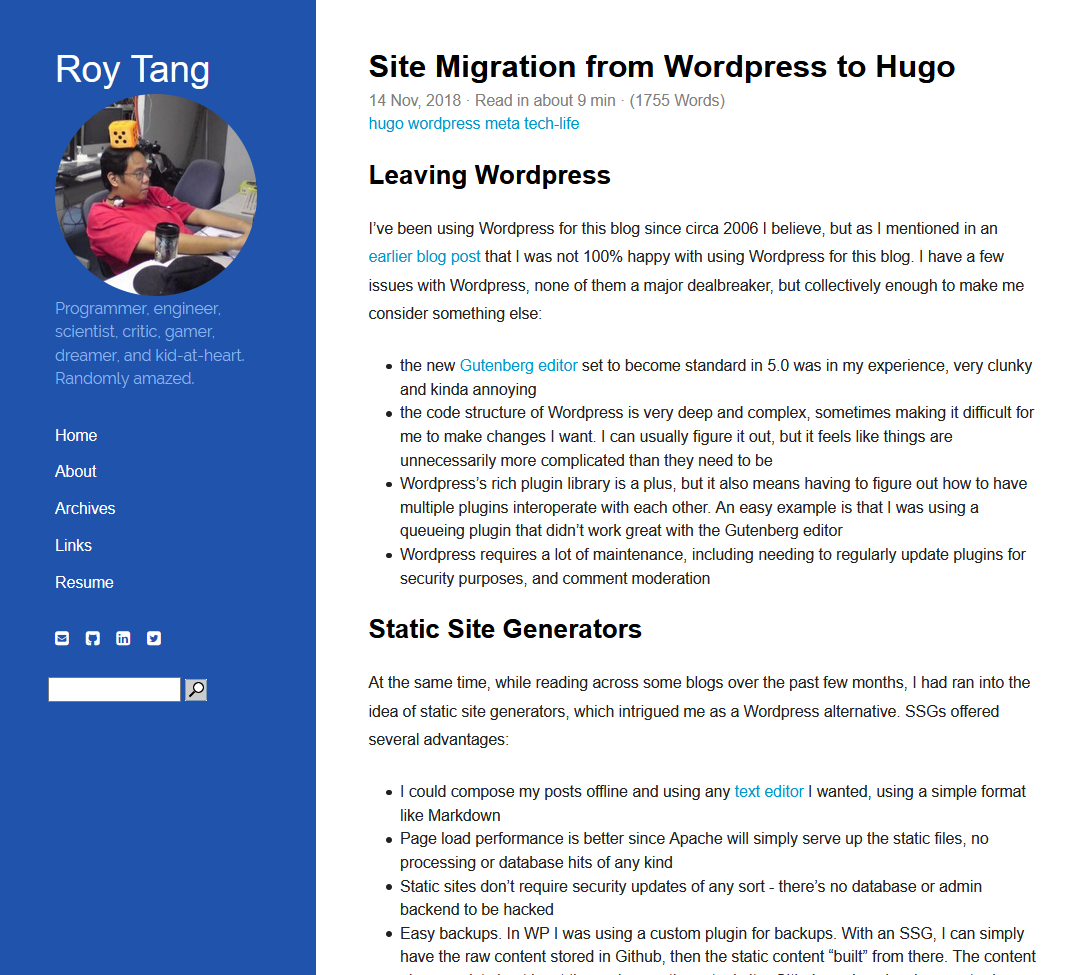 At the end of it, it turned out a bit more effort than I expected. I'll probably be cleaning up the exported older posts every so often because I'm OC that well. The theming/templating turned out to be a bit more complicated than I expected, but I think it was easier to manage than Wordpress. The last time I tried to use a custom blog engine, I got tired of maintaining and upating it so I switched back to Wordpress, hopefully that doesn't happen here. Not having to maintain a web interface is a pretty good indicator.

Despite the effort, the great thing is that I did learn a few things, so at the minimum it's already a win: