I said in my previous Duelyst review that Eternal didn't really hook me. That was in Feb 2017. I stopped playing Duelyst after around six months. I started playing Eternal regularly July of that year, and have been playing regularly ever since.

What changed my mind? I'm not sure, but once I got around to playing Eternal regularly, I found myself enjoying it. I think one of the main factors is that out of all the online ccgs I've tried, Eternal is the one that's closest to Magic the Gathering. That's not really surprising, since a number of Eternal's lead designers are MTG Pros and Hall of Famers. As such, my review will tend to compare Eternal to MTG.

Eternal games play out almost exactly like MTG games. Each player plays mana sources (called Power in eternal), then uses his pool to play creatures and spells to interact with the enemy. You send in creatures to attack and deal damage to the enemy until the enemy's life total is at 0 (Eternal starts at 25 life vs MTG's 20.), the enemy can send his units to block your attackers, and so on. Eternal feels like a smoother, more streamlined MTG. I'm also playing MTG Arena regularly these days, so I know that by comparison Eternal's games feel like they flow quicker and finish faster.

Some of the relevant changes that I believe make it feel like a faster MTG: 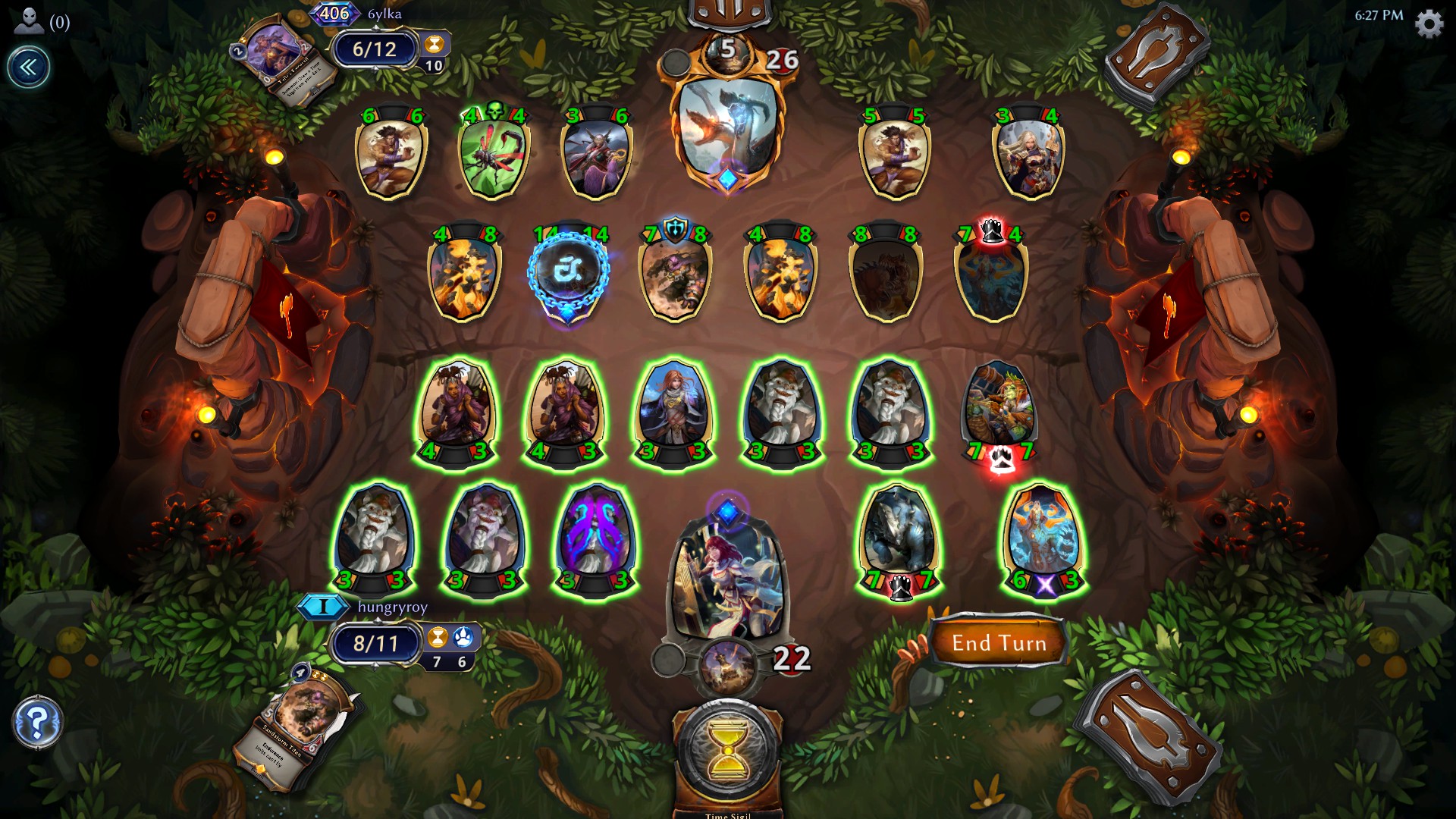 Eternal's power system is similar to MTG's mana system - you have to draw cards that provide power the same way that you have to draw lands in MTG. This means one of MTG's inherent "problems" - mana screw - still happens in Eternal. In fact, on the forums mana screw is one of the complaints that often comes out (I suspect from former HearthStone players). Coming from MTG, I understand that building your deck to avoid mana screw is one of the skills needed in games like Magic and Eternal. Eternal eases the problem a little bit with its mulligan mechanic: Eternal gives you one free mulligan, and the 2nd hand is guaranteed to have 2-4 power. As I write this, they are also experimenting with allowing a 2nd mulligan that drops your starting hand size by one, still with the guarantee of 2-4 power.

Color screw can still be a problem in Eternal, if you don't have enough of the correct influence (Eternal's analogue to color), you can't play cards that require that influence. They improved on this a bit because in Eternal, power and influence aren't tied together the way mana and color are, they are independent. The influence requirements are minimums that aren't used up like mana of a given color. That is, if you have one Fire influence, you can play any number of cards that require one Fire influence. In MTG, if you only have one source of red mana, that red mana can only be spent for one card at a time.

As you can see, they don't map cleanly. Often in my own head I still refer to the factions by their MTG analogue (and I call Justice Green and Time White), but I've been improving on this lately. The play styles largely map correctly though. Fire decks are often aggressive with small quick creatures and burn for reach. Primal decks have card draw and counter magic. Shadow decks have a lot of removal and life draining. Time decks have mana acceleration and big creatures. Justice decks have Wrath of God lol.

As expected, many of Eternal keywords are similar or analogous to MTG keywords. And they added some fun, unique keywords of their own. Eternal already has a number of expansions out, so there are quite a number of keywords already. Here's a quick list:

These are just the battle skills! Eternal also has a set of trigger keywords that define when an effect will happen. There's Summon and Entomb, analogous to HS's Battlecry and Deathrattle; Empower, Spark and Tribute, are analogous to MTG's Landfall, Bloodthirst and Morbid; and so on. There's far too many to cover here!

Re: other mechanics, the main one to note is that Eternal takes full advantage of the fact that it's a computer game and doesn't need to deal with player memory issues. This means that buffs and debuffs stay on cards, even when they leave zones. Unlike Hearthstone, the graveyard/void zone exists and thus reanimator strategies are viable. There is some amount of RNG, such as "units gain a random battle skill", but not as much as HS.

A nice mechanic they have is the "Market". Basically each deck can have a set of five cards set aside as a "Market"/sideboard, and there are a set of cards (one for each faction) that allow you to fetch a card of that faction from the market. Basically similar to the way the Wishes worked in Magic. It's a clever approach that allows for some form of "sideboarding" even for best of one matches

I think Eternal is inherently more skill-based than HS because of:

The meta for competitive play is rather healthy, there are a number of viable decks in different archetypes that can you to Master ranking on the ladder.

In terms of F2P, Eternal is the most generous among CCGs I've tried in terms of how much it gives players for free, as far as I can tell. Aside from the standard three daily quests, your first ranked win of each day gets you a free pack. There's a free Gauntlet mode where you fight against AIs, and just grinding Gauntlet can get you enough gold to purchase the campaigns, which give you more cards to work with. When you start out, you quickly earn starter decks for five factions and five color pairs. These decks are decent enough for ranked play; I remember I took the Rakano and Stonescar starter decks up to Gold rank during my first month. They recently nerfed gold rewards from chests (that you earn from quests) by 10% for balance reasons, but I think the rewards are still pretty generous.

I hit Master rank in constructed on my third month of play (same rate as with Duelyst I believe) and have regularly hit it ever since. By comparison, I've never hit legend rank in HS. It really helps that Eternal games are quick and a lot more fun.

It took me a while longer to hit Master rank in draft - more than one year in fact, I only hit it last week. This was the last achievement I needed for Steam completion too. 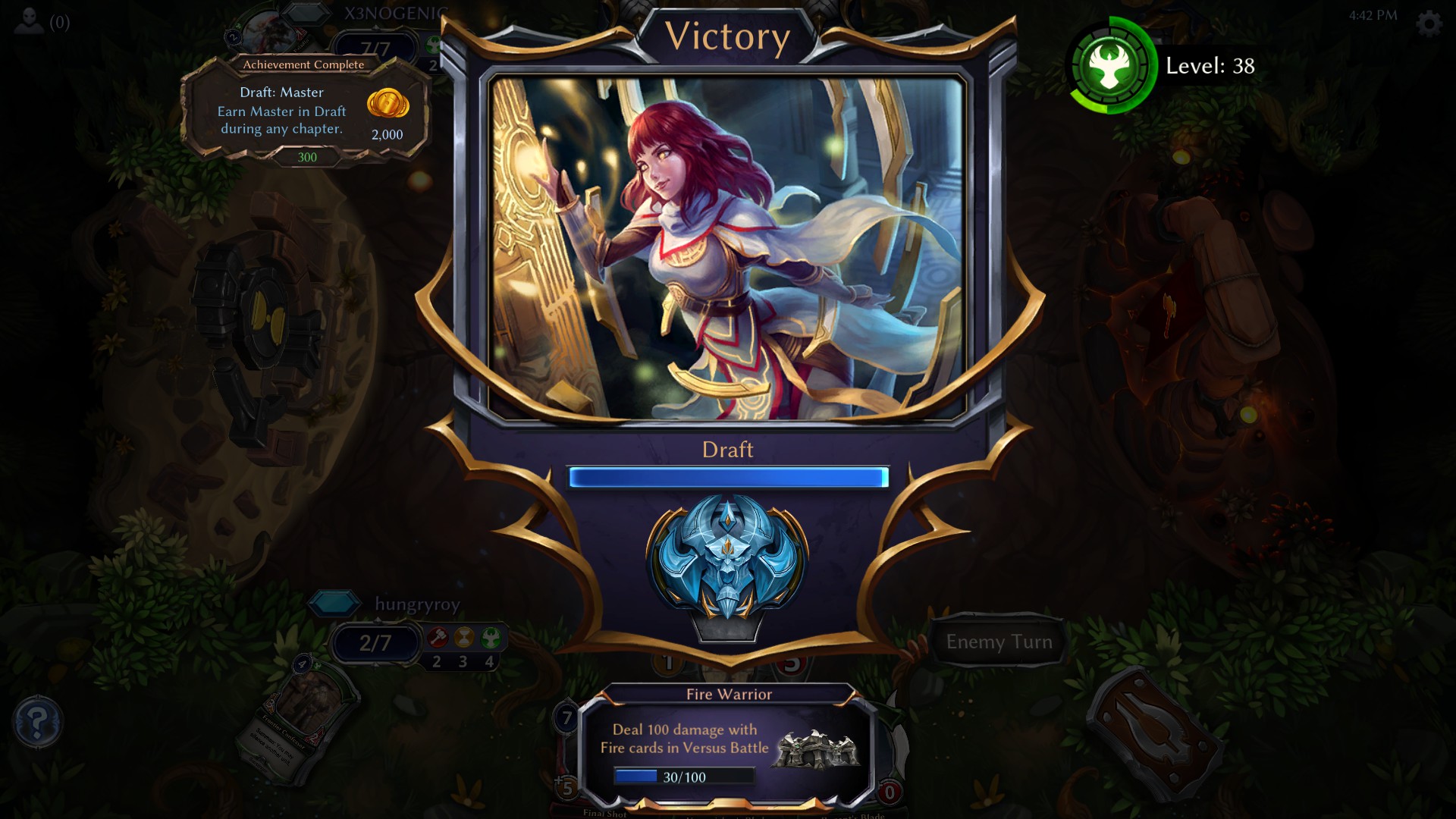 Eternal's world is described as "Six Guns and Sorcery Combined", which means there's Gunslingers alongside magic users and shamans and such. There's a little bit of steampunk in there too, along with valkyries, yetis, centaurs, wisps, dinosaurs, radiants (basically magical aliens), grenadin (basically goblins), sentinels (basically giant robots), and a bunch of other stuff too.

It's pretty fun, and the story is continuously being updated. Each monthly league and the occasional campaign or new card set represents a change in the story. Major characters are represented by powerful cards and often have multiple versions representing their stages of growth. A prime example is Icaria, the young Valkyrie captain who later becomes a rebellious keyword-souped Akroma-like avenger after witnessing her superior's misdeeds: 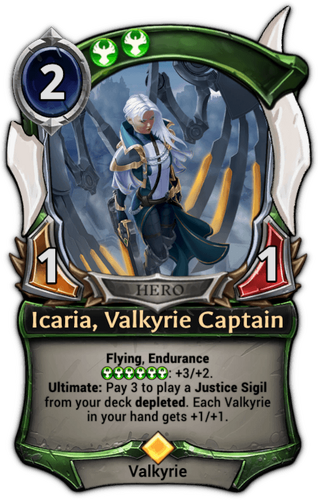 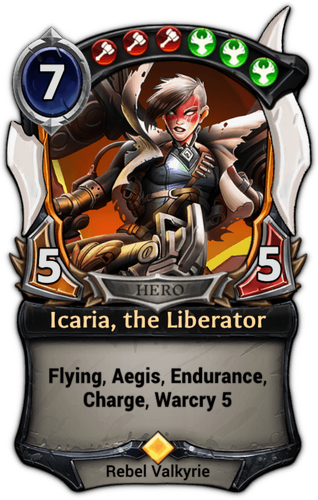 Aside from the lore, I like the game's overall aesthetic. Many game actions have smooth and quick animations that keep the game alive. Units with Aegis are wrapped with an animated bluish glow. Legendary units crash onto the field with force, attacking units dive towards their blockers, and so on. I think the animations and aesthetic are comparable with HS in this regard.

The question is now: will I keep playing Eternal now that I've hit my usual target of all the Steam achievements? Or should I focus on MTG Arena for the foreseeable future? (MTG Arena blog post sometime in the next month maybe)

It is still pretty fun to play Eternal, and they just came out of Early Access and launched on XBoxOne, so there might be an upsurge in community activity. I think I will play it for a while, the designers seem to know what they're doing, and a new set comes out next month too.

There are a few other online CCGs I have accounts for that I haven't really gotten into for some reason or another, maybe I'll try giving them another chance next year. There's Spellweaver (very slow games and kinda boring), Shadowverse (not a fan of the aesthetic and ugh the UI is so messy/cluttered), and Gwent (uh, it's weird). There's Valve's Artifact coming out too, I might try that if reviews are good. So many card games to play!