(“Late Game Review" because I’m trying to play through games on my ridiculously old backlog, so these games are pretty old) 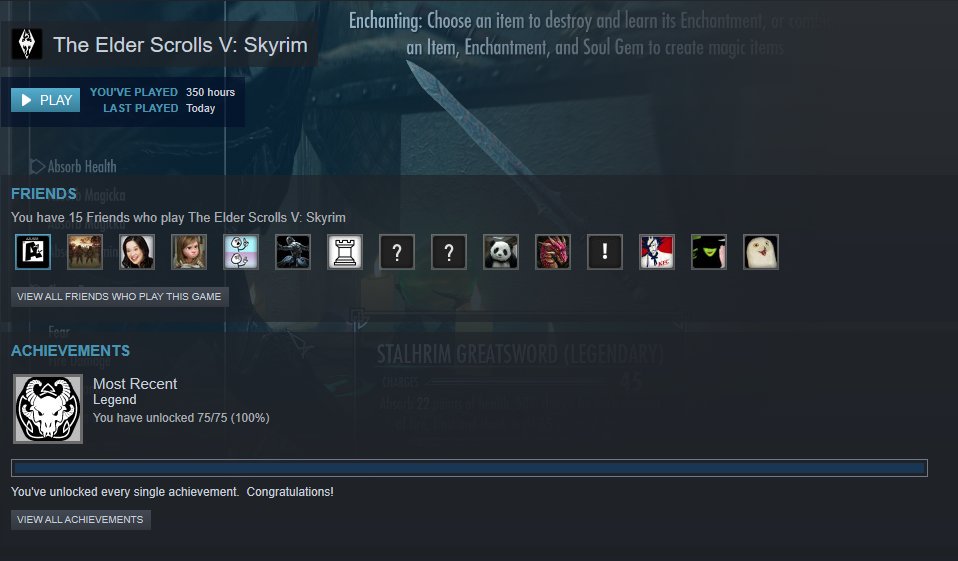 The Elder Scrolls V Skyrim came out on 11/11/2011. I remember I bought the game for Steam on launch day. I finally "finished" it after 350 hours of gameplay and seven years real-time. "Finished" in this case means "achievement complete", not just "main quest complete", because as any Bethesda gamer knows, that’s not how their RPGs roll.

I had been looking forward to this game because I had previously enjoyed both ES4: Oblivion and Fallout 3 on PS3 and had also just finished Fallout: New Vegas on Steam and was open to more open-world exploration. I remember being tempted by the badass collector’s edition Alduin statue too but opted out due to price and the fact that it was huge.

My first character was a male Nord named Hunter. I actually managed to finish the main quest a bit more than a month after getting the game (fairly fast!). I used that first character to complete all the guild quests -- Companions, Mage’s Guild, Thieves Guild, Dark Brotherhood. Afterwards I immersed myself with the open world and toyed around with mods for a bit. I played it on and off again for a few years, and buying the DLC expansions (Hearthfire, Dawnguard and Dragonborn) eventually when they were on sale. I started a few other runs but never got far.

In 2016, I started my final run -- the character that I would be able to bring to "achievement completion" including all DLCs. This final character was Arche, an Imperial (named after the Tales of Phantasia character).

My final armor set was the Deathbrand from the Dragonborn expansion since I was trying to level up Light Armor.

Anyway, I greatly enjoyed this game obviously. It’s been available for a while and been ported to every platform imaginable (it even got a new console release this year!), so there’s not much point talking about the features and whatnot. There are some other things I’d like to cover though:

Levelling Up and Legendary Dragons

The last achievement I got was the one for killing a legendary dragon, which took me forever. The first issue was that legendary dragon’s don’t spawn unless you’re already level 78. In my 2nd run, I finished the Dawnguard and Dragonborn content and all other achievements by around level 50, and it was a grind to get to level 78 througn conventional means. I didn’t want to do any console cheats to get to 78, so I tried to look for faster ways to level up. There’s a bunch of suggestions on the internet, but here are the best ones:

After getting to Level 81, the next problem was actually finding a Legendary Dragon to fight. Supposedly there was one that always spawns at Arcwind Point, but I never got one to spawn there, even after clearing my mods. I tried fast-travelling across dragon burial grounds for a while with no luck. Eventually I managed to randomly find a Legendary Dragon while wandering near Dragon Bridge (that’s where my last save is!)

I had a *lot* of mods installed, mostly additional gameplay/quests, additional items added to the game world, convenience mods (adding map markers etc), or stuff to improve the ambience. I’m not much for stuff like graphics improvements or silly mods that add Thomas the Tank Engine or Macho Man dragons. I did have this mod that added Star Wars lightsabers to the game that I wanted to get rid of but I had so many mods installed I always gave up trying to find it on the list. The best mods I used throughout my 350 hours were:

I also have the Legendary Edition on Steam (free upgrade since I had the DLCs), but I don’t think I have the patience to go through the entire game again. The size of the game and the excellent mod community mean one could very well play Skyrim forever, especially since Bethesda tells us The Elder Scrolls 6 is still a ways away. Unfortunately, there are still a lot of other games to play, and now I’m finally able to uninstall Skyrim.

Attached to this post are a dump of my Steam screenshots folder. (These used to be embedded via an Imgur album, but I edited the post on 2020-Sep to embed them here instead, for reasons.)

My final armor set was the Deathbrand from the Dragonborn expansion since I was trying to level up Light Armor.