I had booked the Singapore trip earlier in the year, since I almost always attend Grand Prixs in Singapore as its an easy trip and gives a good opportunity to visit friends. Unfortunately, I ended up not having time to prepare for the tournament itself. Fortunately, it was a limited event rather than constructed, so I figured maybe I could wing it and still do well. (Spoiler: I could not.)

Prior to the trip, my prep for the sealed format had consisted of a single pool at my prerelease and reading a few articles online the night before the trip. I went there on Day 0/Friday to try a last chance trial, but didn't get past the first round due to a "I'm still testing" mentality that meant poor mulligans and not reading the cards and tilting and scooping before figuring out there was an alternative.

Later that night, we opened 6 different sealed pools and tried out a few different builds to get a feel for the format. I liked the B/W vampires archetype best, and felt that the format was aggressive and wanted to avoid dinosaur decks which would have too many high-end drops. (Spoilers: Dinosaur decks would be my undoing). I knew I wanted to open cards like Bishop's Soldier, Mark of the Vampire, Walk the Plank, Vanquish the Weak, Ixalan's Binding and so on.

We ended our night prep with a few simple guidelines for the next day:

Main event time: Amazingly, the judges had pre-registered all the sealed pools. I was happy to note as I opened my pool that I had opened many of the cards I wanted to see. I had a secondary R/G dino list that seemed workable but lacking a few playables. I just went with B/W aggro since that's what I was confident with. Here's the build I went with:

Here's a blurry image if you like that sort of thing: 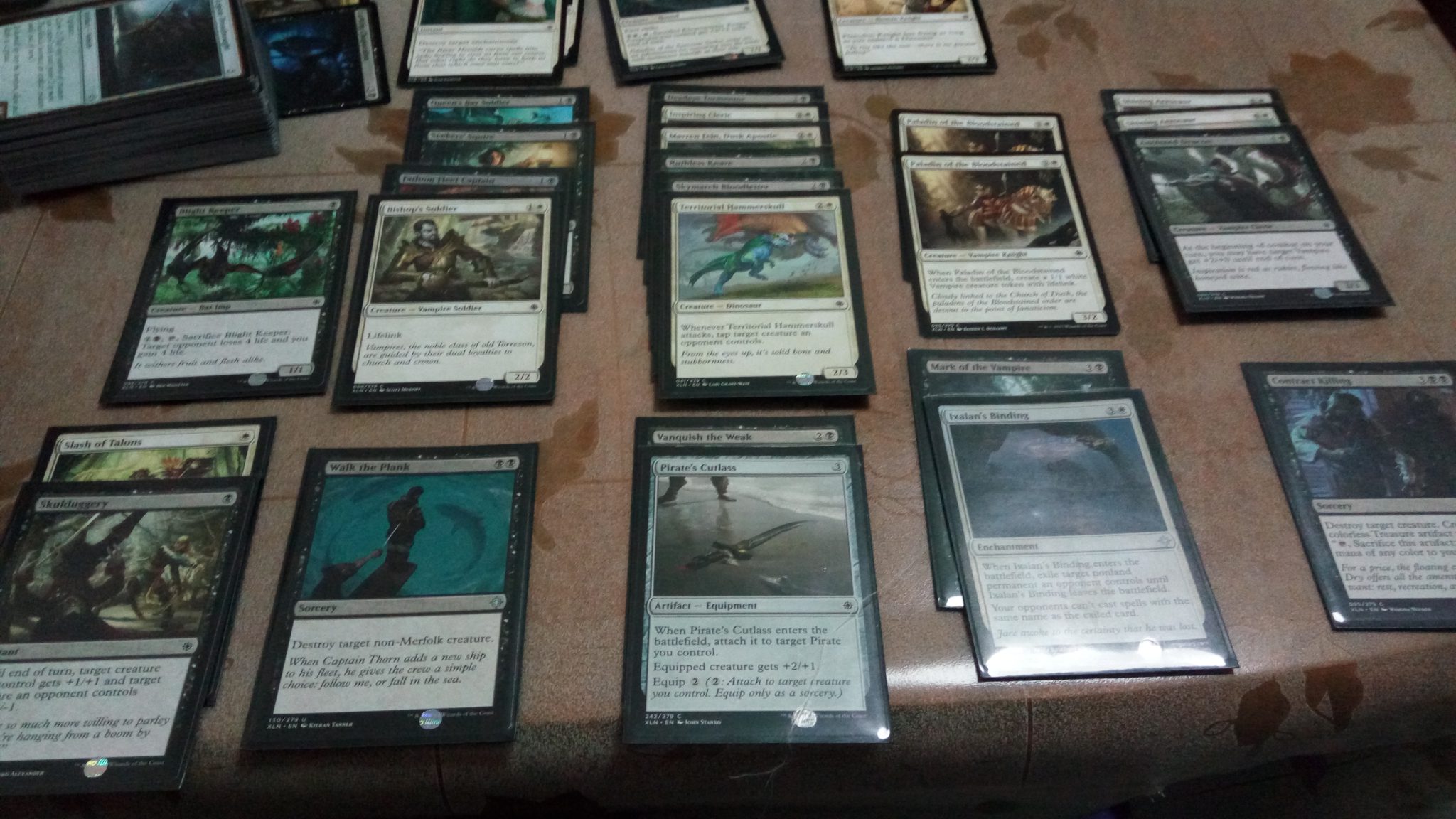 I was pretty happy with the pool and thought I could do well. The deck looked good, if a bit lacking in two drops. To the swiss!

Round 4: LOSS vs B/W. The guy I fought here eventually finished Day 1 undefeated, so I guess he had a pretty good pool anyway. I was saddened by the early loss, but there was still much to give.

Round 5: Win. Hooray, we are back on track. Or so I thought.

Round 6: Loss vs B/G dinosaurs and removal. Ok, guy had a really solid pool and I tilted a bit, that's fine. 7-2 for Day one was still doable and a perfectly decent finish.

Round 7: Loss vs R/G dinos. Ugh. Now I see the problem with not having enough two drops. Not able to push through enough early damage means the opponent stabilizes. Mana problems at 16 lands doesn't help either. No more losses to give after this one.

Round 8: Loss vs R/G dinos again. Similar story as the last round. I message my friend who had gone home earlier. "Good news! I don't have to come in early tomorrow!" Sigh.

Round 9: Playing just for fun now. Aaand I lose a very close game 3 to another B/W deck.

Oh well, that's Ixalan limited for me then. The next set drops early January so I'm not playing this format again. The good news is, even if you scrub out on day one, there's always Chaos Sealed to look forward to on Day Two!

Chaos Sealed was pricey since we get two Masters boosters this time. Here are the ones I pulled: 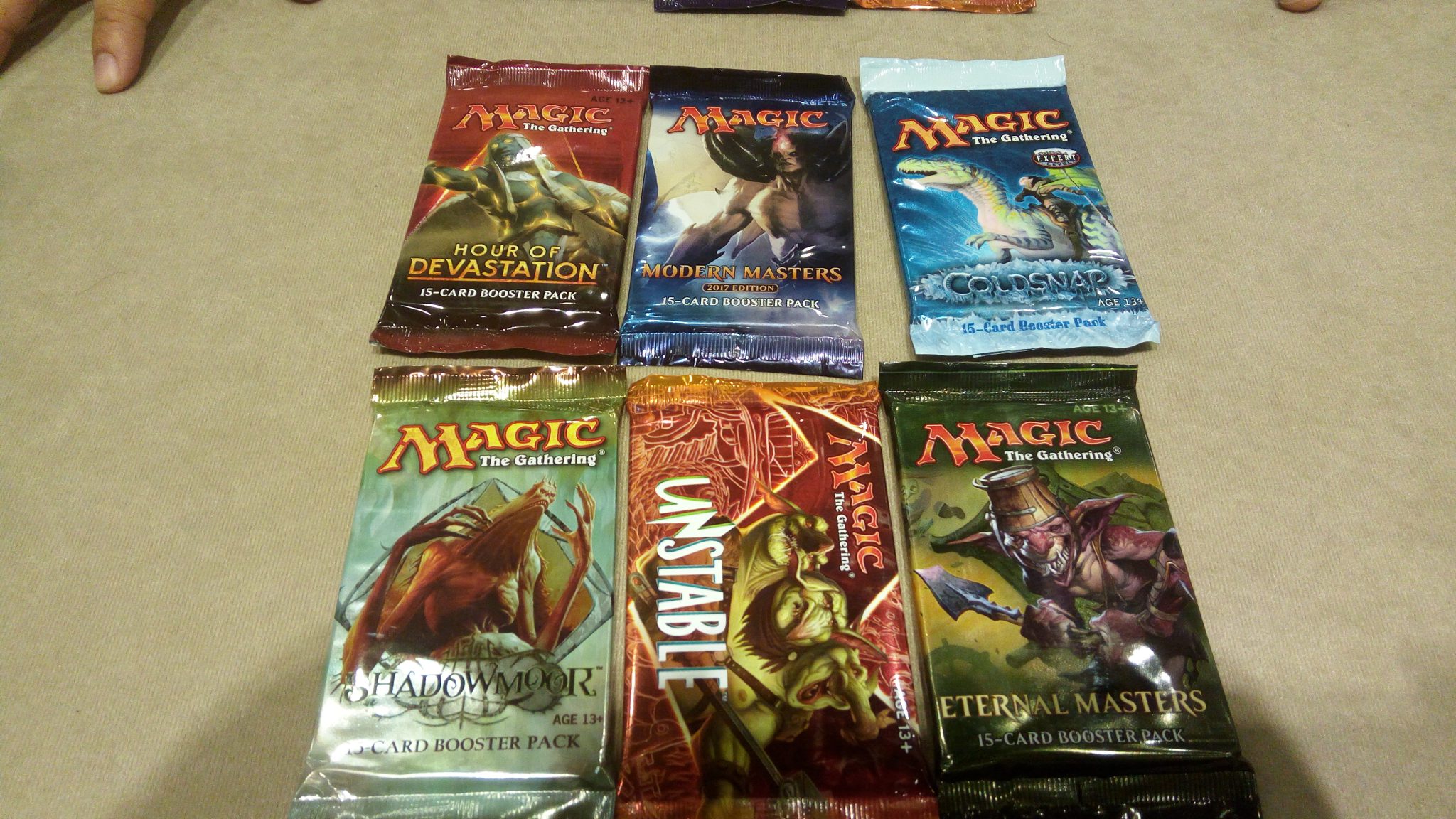 Yup, everyone got an Unstable. And yup, I sadly got a Coldsnap. I built a red/blue deck with green and black splashes. Mostly just fliers and tempo and removal. Most expensive pull was a Verdant Catacombs from the MM2017. I did use a few Unstable cards, just removal and some solid creatures. None of that contraption silliness, though I did have the opportunity to lose to one later on. I also had a foil Terminate that happened to be by the GP artist so I managed to get it signed.

I won the first 3 rounds on the back of my fliers, then lost round 4 to a mildly annoying Chinese person, then did an ID with the 5th round opponent. Got enough points for like 5/6ths of an Ixalan box. I actually wanted to get a GP shirt, but they were out of XXXLs. At least I managed to win something for the weekend so it wasn't a total wash.

I'm a bit sad about not performing well in both GPs I attended this year, and as always it makes me think about quitting competitive Magic completely. It requires a lot of time and effort to keep up and be familiar with the metagame. In fact, I had already decided to skip the Standard GP in Singapore next June. (This will be the first GP Singapore that I would have missed since 2010). I'll probably stick to Modern mostly for the near future.