I’ve had a bit more free time recently, and I’ve been filling that time by starting up some hobbies (some old, some new). One of them has been sketching. I’ve been drawing things for as long as I remember – I have elementary and high school notebooks with more doodles and x-men drawings than there are notes. And even at work, I often find other meeting participants checking out the random sketches I had been absently doing while other people were speaking.

I started following this subreddit SketchDaily. What they do is they have a bot post a daily theme (submitted by other users) and users post their sketches for others’ comments. “Sketches” is a wide-ranging term here, submissions can be anything – redditors will typically post sketches with a wide range of skillsets (some are beginners and some quite advanced) and mediums (some do real-life paper sketches or inked and colored drawings, others do digital stuff drawn on tablets or with photoshop).

If you follow me on Instagram (@roytang0400, it’s funny how I got that account, but that’s a story for another day), you know I’ve been posting my sketches for a bit more than a month now. I haven’t written a blog post in a while, so I thought I’d post about this and maybe show a bit of how I do my sketches. I’m not super talented or anything, although I like to think I’m not a beginner.

For March 15th, the theme posted on r/SketchDaily was “Lots of Dinosaurs”. I usually try to relate the theme to a pop culture thing I’m familiar with – something from movies, TV or video games. Since I’m a big Transformers fan, my first instinct was to do a drawing of the Dinobots. I’m not good enough yet to do one from scratch, so I usually search online for an image to use as reference. (I find that my sketches get a bit worse when I don’t use a reference)

I found the following image via Google Images, originally hosted on http://kaiju-kingdom-hearts.wikia.com/wiki/Dinobots: 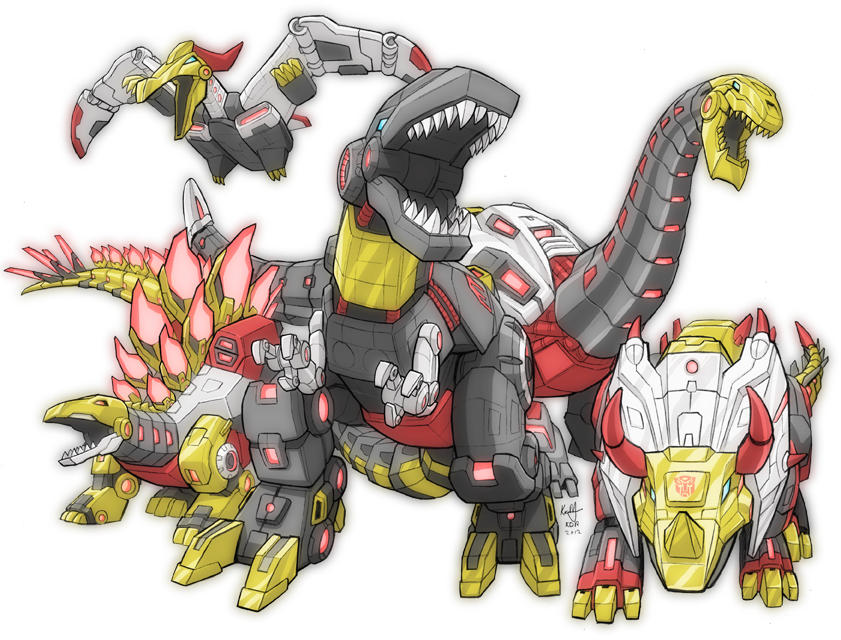 I usually start by doing a light-pencil sketch of a rough outline and layout:

I’m drawing on a cheap sketchpad I bought for like 50 pesos using a 2B pencil. I usually just take pictures of my submissions using my cellphone camera, which explains the shadow near the bottom. I started out placing Grimlock’s head then placing the other Dinobots around him. It turned out that I had made Grimlock’s head a bit too big which meant I didn’t have room to place the other Dinobots exactly as they were in the reference image, I had to bunch them up closer (Sludge is mostly just a neck and head now), but that’s fine. Too lazy to start over.

Once I have the initial light-pencil sketch, I draw in some heavier lines. I start with Grimlock in the center:

Then Snarl and Slag on either side:

Then the last two, Swoop and Sludge:

Now, usually I’d stop at this stage and maybe polish a bit more (Grimlock probably needs an Autobot symbol on the chest) and just submit it to reddit already. But the problem with this sketch when I look at it, it’s hard to tell the Dinobots apart – like in the image above, it’s hard to tell where Grimlock ends and Snarl begins.

So just this once, I thought I’d try adding some colors to the sketch. I’d never done it before, but my mom was into the whole adult coloring book fad so she had some colored pencils lying around for me to use.

Again I started with Grimlock:

And then the rest:

Okay, it didn’t really improve telling the Dinobots apart by that much. Maybe only a little bit. At this point I’ve already spent way more time than I normally do on this (I was already on one and a half hours, most days it takes me less than half an hour), so the I went ahead and submitted the above image to reddit.

The above isn’t representative of what I do with all of the sketches. For one, this output is way more detailed than my usual ones. And the process varies slightly depending on what I’m drawing. I will usually always have the preliminary light-pencil sketch. Sometimes for drawing real-life people, I’ll want to do an outline trace, which means overlaying the paper over an image I want to draw (usually on the iPad) and lightly tracing the outline with pencil. It feels a bit like cheating, but real-life faces are hard enough without it. Maybe someday I won’t have to do them anymore (although I’ve only traced like 3 sketches I think). And as mentioned, I don’t usually do the coloring – and I probably won’t do it again, takes too much time.

I’m still not sure how far I’m taking this hobby. I have no ambitions of becoming a professional or anything (a friend once commented he was scrolling through his instagram feed with famous artists like Leinel Yu and one of my drawings was interspersed and surprised him LOL), but like life, I’ll just see how it goes I guess.