Heaven knows we are in need of some serious income tax reform, and the government needs to work a lot on efficient utilization of the revenue they do earn, so of course when I first saw the image below like any middle-class Filipino I found it a bit enraging. But then I thought to myself: if Singapore has such low taxes, where does the government get their operating budget from? Are they simply 20 times more efficient in using their money? I had time, so I thought I'd do a bit of research. (I'm just pulling figures off the internet and using what limited understanding I have of economics so feel free to correct me where I am probably embarassingly wrong) 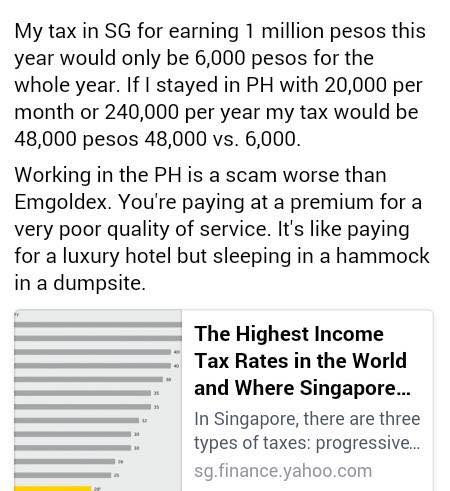 First off, 1M pesos annual salary = around 30,000 sgd (more or less, let's just make the math easy). According to the table from the original article (https://sg.finance.yahoo.com/news/highest-income-tax-rates-world-160000035.html), that's the second lowest tax bracket (200sgd + 3.5% of the excess over 30k sgd). While the 240,000php annual salary is in the third highest bracket for the Philippines, taxed at 20%. Obviously Singapore has a lower tax rate than we do, but it seems a bit disingenuous to be comparing one of the lowest brackets with one of the highest. The highest tax brackets are 20% for Singapore and 32% for the Philippines

The comparison was a bit exaggerated, but that's fine. Singapore tax rates are lower. How much money do they collect? According to http://www.singaporebudget.gov.sg/budget_2015/RevenueandExpenditure.aspx, it was some 61B SGD (around 2T PHP) in 2014. For a population of 5.67M, it comes out to roughly 11K SGD (362k PHP) per capita. Roughly 36% of that was corporate and personal income tax (which I assume are the ones levied as a portion of income)

For the Philippines, revenue was at 1332B PHP in 2014 (source: http://www.bir.gov.ph/images/bir_files/annual_reports/annual_report_2014/cmtt.html) for a population of 100M, roughly 13k PHP per capita. Roughly 58% of that was for taxes on net income (which I assume includes both corporate and personal income tax)

So: Singapore has lower tax rates, but they manage to collect almost 3x as much money per citizen somehow, and less of it is from income taxes. As far as I can tell, complaining about the poor quality of service vis-a-vis the tax rate is ridiculous given the PH government has almost 20x as many people to serve and is earning only around 2/3rds the revenue). The Singapore government can afford to provide better services because their citizens earn more money and hence the government earns more money, despite the lower tax rates. Even if we were able to utilize all the govt revenue 100% (with nothing lost to corruption/inefficiency), we'd still have only 4% as much to spend on services per capita as compared to the SG government. As pointed out by a friend, SG also has a much smaller area to govern and hence much lower expected expenditures.

So it's not a straightforward "we should be getting better services because we have a higher tax rate!". We still need to build up our economy so that we can support lower tax rates without giving up too much in social services. At the very least, comparing ourselves with Singapore is an apples and oranges type of deal