I was sent to London for work for a few months, which meant an opportunity to play a third GP for the year after Manila back in January and Singapore back in June. This will be the most GP events I've played in a one year period. I didn't have time to practice, so I went with an updated version of the Jeskai tempo deck I was playing at the start of Khans rotation.

I was really hoping to run into a lot of monored or UR Artifacts -- basically the PT Origins metagame. Unfortunately the metagame had already reacted the week before. Here's how my day 1 shook out:

I was expecting to be slightly ahead on Abzan decks in general, but my lack of practice turned that into a 50-50 proposition instead. I made a lot of sequencing errors and play mistakes (and felt like I had too many mulligans). I lost the Temur match due to being too aggressive (and not understanding how Thunderbreak Regent worked lol).

The thing about competitive Magic is that both proper deck selection and practice both matter. For all three of the GPs I played in, my deck was a good choice -- unlike previous years where I basically slapped together whatever I could based on card availability. My best performance this year was in Manila back in January since I had a lot of practice for that. I played in a number of trials beforehand and had regular playtest sessions with a small group. For Singapore in June, I had a bit less preparation; I only played two trials and a shorter playtest period, and I almost made day 2, dropping the last 2 rounds. For London, it was week 2 of the season and I was in a foreign land so I didn't have any chance for any sort of preparation.

Losing at competitive Magic is a downer. Well, competitive anything really. It's a problem with being a spike haha. It makes me question whether I'm going to keep doing it -- you get a high from competing and winning and eking out close victories, but losing makes you question whether all the prep effort is worth it. I guess it's a matter of finding the fun in it again, and the drive to keep playing. We'll see.

I played a sealed after dropping out of the main event, but only managed to win 4 boosters. I also played the SSS on Sunday, but scrubbed out again. I quit the weekend after that, since it felt like I was on tilt and was dead tired. So the GP was a bust, but at least there was swag! 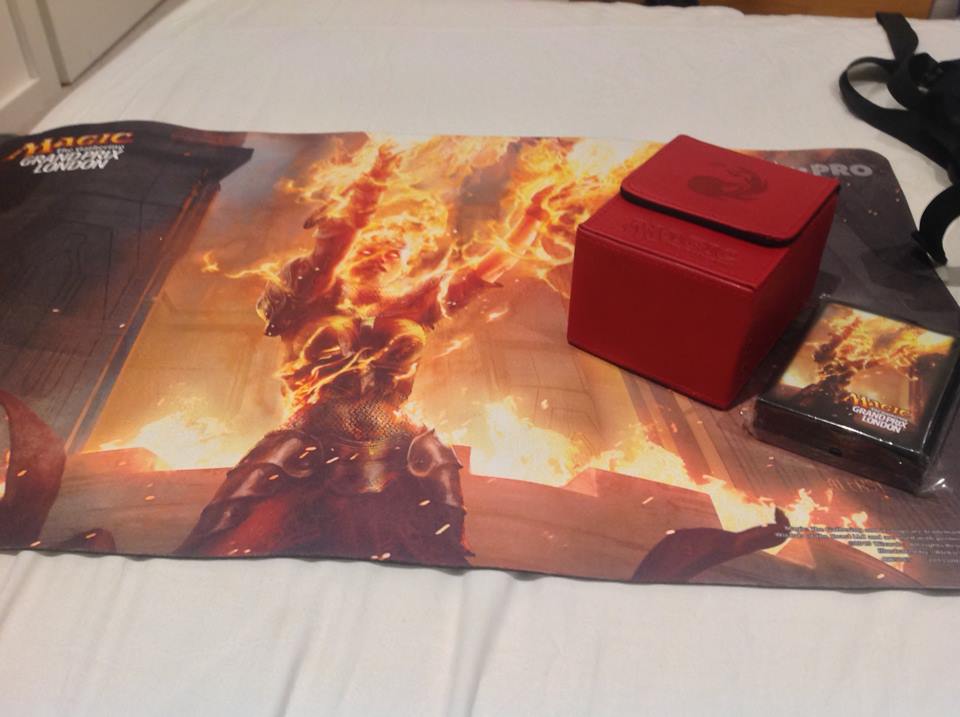 Of course you will come to SG for the GP. Why is that even a question?! ;)

About time you posted this. :D

congrats! but on your decklist, surely you meant 'hordeling outburst'?:)

Feb. 12, 2015, midnight via www.facebook.com
If you enjoyed my content for some reason, I'd love to hear from you! Here are some options: