This Week In Marvel: Hawkguy, Daredevil, X-Factor, X-Treme X-Men and the end of Uncanny X-Force

There's really far, far too many comics I read each week to cover them in one blog post so I'll just cover them in groups. First, the non-Marvel NOW! series:

Hawkeye #6 is the highlight of this week's Marvel releases. The book is consistently funny, down-to-earth and awesome, and this issue is one of the best so far. If you haven't heard about it, the series written by Matt Fraction is one of Marvel's best ongoings right now. The book tells stories of what "Hawkguy" is up to when he's not out Avenging against alien threats or hydra or whatever. He owns an apartment building and has a dog and Tony Stark comes over to help set up his A/V system so he can watch a DVRed copy of the final season of "Dog Cops". David Aja is killing it with the art too. Nothing too hyper-realistic, the art is simple and straightforward but we get excellent panel layouts, especially with conversation pages where there's like 20-30 panels each. This issue in particular feels like a comic strip version of a sitcom; except sitcoms don't usually have gangs of amusing thugs who say "Bro!" all the time. As in "You should really be reading Hawkguy bro!" 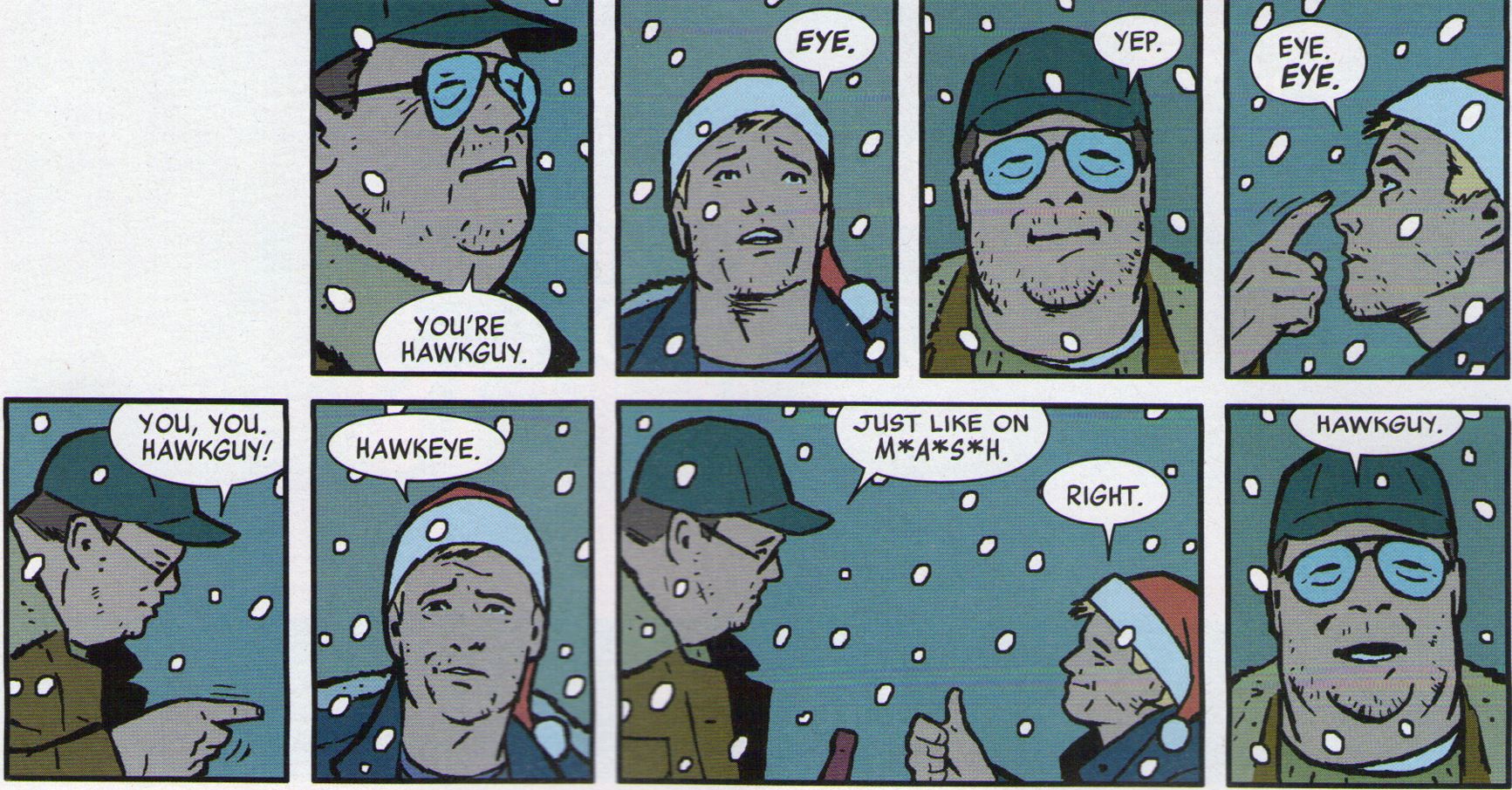 This Week In Marvel: Hawkguy, Daredevil, X-Factor, X-Treme X-Men and the end of Uncanny X-Force - hawkguy.jpg

Daredevil #21 resolves the Spot and Coyote plotlines (with some threads left dangling), and settles the question of whether Matt has been crazy all this time. The thing with Spot and Coyote was a bit creepy really so I'm kinda glad to move on. But the best thing with this issue has to be the bonus appearance of the new Superior Spider-Man! 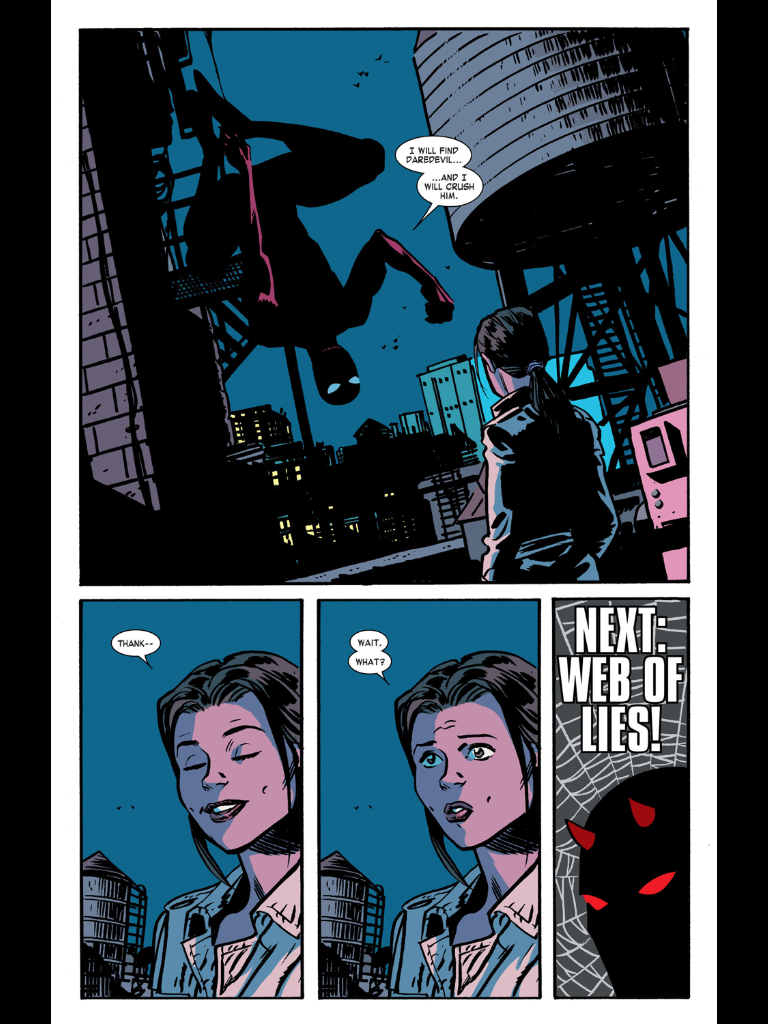 This Week In Marvel: Hawkguy, Daredevil, X-Factor, X-Treme X-Men and the end of Uncanny X-Force - daredevil21.png

That exchange really feels like how I'd imagine it going with the new "person" behind the Spider-Man mask and makes me look forward to Amazing Spider-Man #700/Avenging Spider-man #15.1 next week and Superior Spider-Man in January (and of course the next issue of Daredevil!)

X-Factor #249 is a prime example of the craziness Peter David brings to these characters' lives - Madrox and Layla are married (and apparently she can generate force fields now), M has been possessed by a troll (and she's very angry about it) and all this time they're trying to fight off a horde of demons trying to invade our world. Not that there aren't any other superteams that could be defending our world of course, but one of the great things about X-Factor is that the stories are more or less cut off from the rest of the Marvel universe unless absolutely necessary (well, it seems Alex up and vanished from this book supposedly to join the Avengers, so there's that), which means Peter David is free to have out of this world things happen to the characters. It isn't always the best book Marvel puts out, but it never goes into that boring zone where you'd wish you were reading something else. Oh, and as I write this I realize I've been reading Peter David writing X-Factor since the 90s! (Not continuously of course, and only Madrox and Lorna are from the original team he wrote)

X-treme X-Men #8 brings new members of our dimension-hopping Xavier hunters, including a second Dazzler - this might get confusing. Or maybe not, depending on what happens with this issue's cliffhanger. Alternate universes are really great, it gives writers a chance to explore characters in a different light, and XXM writer Greg Pak has brought us a lot of that. We get younger versions, battle-hardened versions, versions with different sexuality and race (is that a black Cyclops?!) as the team jumps across dimensions. I'm always looking forward to reading this book.

Uncanny X-Force #35 marks the end of Rick Remender's critically-acclaimed run as he moves on to Uncanny Avengers territory. This final issue isn't very action-packed, but it wraps up some dangling threads, with Psylocke clearing things up with her brother, a surprisingly lucid Deadpool talking Evan through how to handle all the stuff he's been through and the fate of Fantomex (is he really dead? Then who's that female version in the Marvel NOW Uncanny X-Force previews?). We also find out what future Wolverine told our current Wolverine and how it relates to Daken's ultimate fate as shown in UXF #34 (I'm kinda hoping Daken stays dead - it adds a lot to Logan's character that he has that low point in his history). It's a great ending to a great run, hopefully Sam Humphries' new Uncanny X-Force will be just as great.