It's "Last Week in Marvel NOW!" since this is going up on Sunday/Monday. And what a lot of Marvel NOW! we got, since many of the top titles are double shipping this month. Hopefully the schedule normalizes back to monthlies soon, I'm already reading far too many books as it is! (Well, that's kind of a good problem to have right?) Luckily Marvel only has two books coming out on Christmas week, gives me some time to catch up.

The best books this week are the same ones I've been raving about the past month. We start with Avengers #2 by Hickman/Opena/White. There's a lot less action in this issue as Hickman takes the time to do some more scenario-building. We're treated to a bit of a background check on the new villains as well as some flashbacks of how Tony and Cap went around recruiting the new Avengers team. 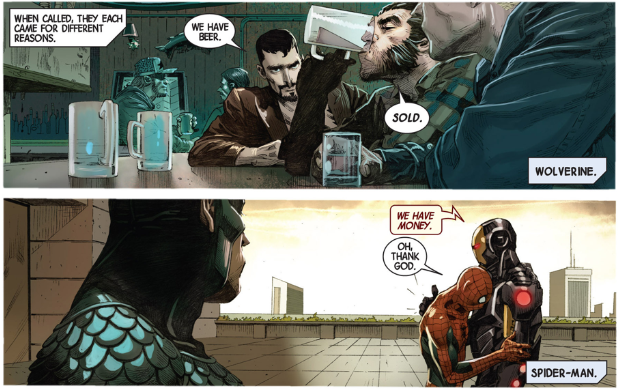 The opening story arc of Hickman's Avengers harkens back to the trope used to introduce a new team in Giant-Sized X-Men #1, with the original team getting captured and only their leader making it back to assemble a new team for a rescue mission. This issue ends with the new team starting the rescue mission, hopefully we're in for an action-packed third issue. Art-wise the issue is still spectacular, although Thor does look a bit ridiculous in the cover: 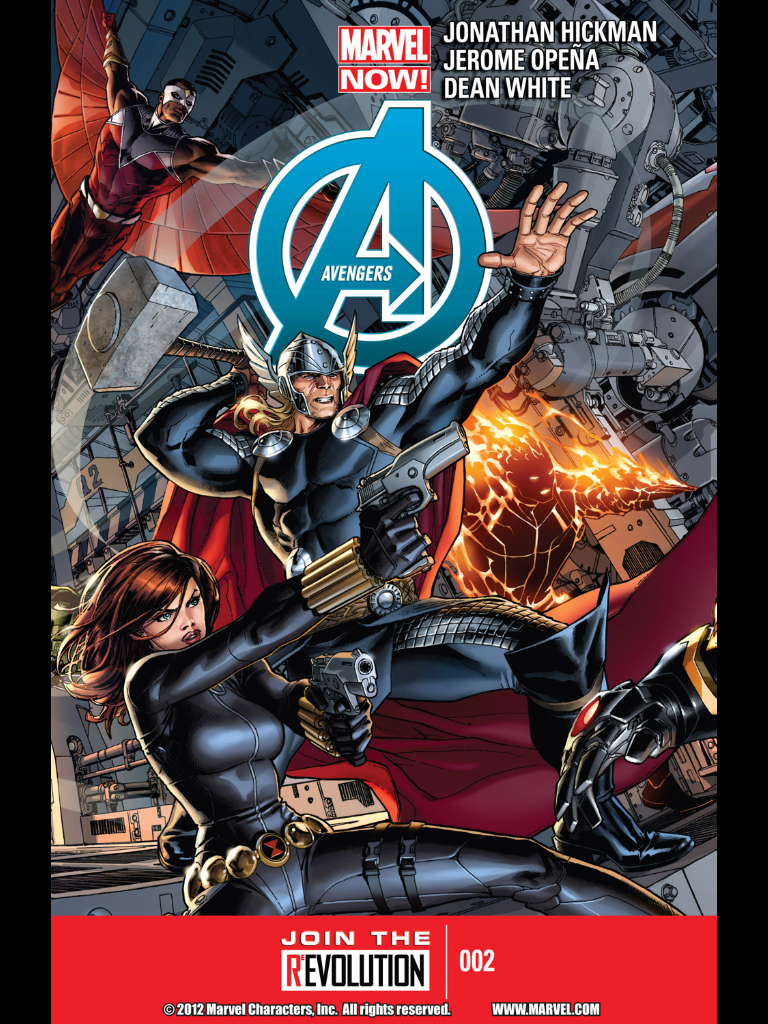 The internal pages by Opena/White are still top-notch though. I'm especially fond of the level of detail and the way they present close-ups of the different characters. I hope they'll be able to stay on the book and maintain such a high-level of quality in the long run.

Next up is Thor God of Thunder #3, continuing the god butcher story arc. This issue focuses more on present-day Thor as he tries to track down the god butcher and all he finds are more victims. Hard to predict how Jason Aaron plans to end this thing, since the god butcher is still around at the time of future Thor, we can only assume that Thor either loses (not likely, since that means his death) or he won't be able to come up with a permanent solution. Ribic's pencils and Svorcina's colors seem to be getting more epic with each issue, I'll just leave you with a quick taste: All-New X-Men #4 was a bit disappointing for me though still pretty good. Okay, the only really disappointing part was that we didn't have a real Scott and Scott confrontation, and Cyclops and Magneto kind of just chickened out and fled. I kinda feel the way young Iceman feels:

I guess it just feels like we're four issues in and we're barely past the initial premise of the book, the pacing could be a bit faster I guess. Of course it's already amazing that we're at issue 4 when Marvel NOW! isn't even two months old! That being said, Bendis and Immonen are still doing great here in terms of some excellent dialogue and panels and I'm still eagerly looking forward to the next issue.

Just some quick hits for the other Marvel NOW! releases this week: Indestructible Hulk #2 sees a skeptical Tony Stark visiting Banner at his new SHIELD laboratories (Tony has been visiting a lot of people recently) and there's a funny panel where Tony tries to reinforce his self-confidence after witnessing just how much of a genius Banner is. This issue doesn't really build up to any story arc but rather cements Banner's role as a SHIELD guy especially with regards to Tony. FF #2 sees an attack on the Baxter Building right after the original Four supposedly should have returned but didn't, and the substitute Four gets to show off a bit. The first two issues of both Fantastic Four and this book actually form the introductory story arc, broken across the two books so it's better to be following both. Fraction's writing is ok so far, but I'm not really a fan of Allred's art style though I know a lot of people are. Avengers Arena #2 tells me that we should be expecting issues focusing on each of Arcade's 16 battle royale contestants which is good - a lot of them look unfamiliar and I'm not sure whether this is their first series. This issue focuses on Deathlocket, who's apprently the daughter of the guy who invents the Deathloks. We also get another death in this issue, but it's one of the new kids and feels a bit like a throwaway. I'm still iffy on this series, but let's see where Hopeless takes it.

I'm kind of "meh" overall on the last three books I'm reviewing, they haven't really wowed me so far. Cable and X-Force #2 gives us a more solid look and what's going on and how their team came together, but we still have no idea how they got to the point where the Uncanny Avengers needed to be taking them in. Cable is apparently having prophetic visions of disaster and supposedly this is going to lead the team to more shenanigans. Thunderbolts #2 follows a mostly boring first issue, but gives us a better idea of the kind of missions Ross has in mind for his team. The artwork isn't the best, it seems like the artist is using the same outlines for every unmasked face; there's a panel where Ross just looks like Punisher (in the same panel) except painted red. This is my first time with Steve Dillon's work and I'm not impressed. X-Men Legacy #3 kinda feels like the writer Simon Spurrier is tripping with us a bit but at least he's bringing some perspective to what it's like to be David Haller. I'm looking forward to the next issue where he actually interacts with some X-Men! I get that the book is supposed to be Legion-focused but still, it's X-Men Legacy, not Legion Legacy.

That's it for Marvel NOW! Next: DC and Image.