I played in the Rise of Eldrazi Prerelease Event yesterday at Eton Cyberpod in the Ortigas area. It was a new mall, so I went there a bit before opening time in case I had trouble finding the venue. Turns out that wouldn't be a problem as there were a bunch of Magic players outside the mall waiting for it to open when I got there. It turns out that the mall had recently changed it's opening hours from 10 AM to 11 AM though, so we all had to wait outside in the heat for an additional hour before we could start the event. =/

and Conquering Manticore are pretty much Dragon-class bombs and red had some cheap removal going for it (2 Flame Slash, etc.), so I figured I'd be playing red. I needed more removal to take out larger guys, so I chose between white and black for the second color. Black seemed shallow creature-wise, while White had 2 Souls Attendants which would really help me survive long games, so I went with white. I wanted to play with all the Eldrazi cards I had, and I also wanted to try out the wall subtheme. Here's the list I submitted:

Round 1 vs R/G/W. We both have Kabira Vindicator so our games go long with lots of creatures gumming up the board. He tries to breakthrough a stalled game three by latching an Ogres Cleaver to an Aura Gnarlid. I take the first hit, then use Traitorous Instinct to strike back with the same guy, winning the game. 1-0 matches, 2-1 games.

Round 2 vs Monogreen. (Yep, monogreen). He opens with Nest Invader into Awakening Zone into Wildheart Invoker and I feel pretty screwed, as he can overrun me easily in a few turns, and my deck doesn't have the capacity to race that. I have a pair of Souls Attendants keeping my life pretty high, but he manages to play Pathrazer of Ulamog with all the Eldrazi Spawn and the big guy just overruns me. I board in a forest and a Naturalize for the spawn-blossom, but it's irrelevant as he gets the overrun dude early again and ramps to 8 mana easily. 1-1 matches, 2-3 games.

My lack of review about the limited format shows up here, as I misread the green invoker and thought it was an overrun effect at common. What was I thinking? Not sure if it would have affected the outcome though, my opponent played the invoker correctly (I don't even think he was aware of my misunderstanding) Still, green ramps up pretty quickly; I could easily see a draft archetype in major green relying on cards like Nest Invader, Kozileks Predator, Growth Spasm and Wildheart Invoker.

Round 3 vs U/W/r. Game one he has a slow start, stuck on three lands, while I get a cleaver on a Rapacious One and start making ridiculous numbers of Eldrazi Spawn and I take the win. But games 2 and 3 he takes easily on the back of common blue and white levelers, Knight of Cliffhaven and Skywatcher Adept paired with some Champion's Drakes. Another possible draft archetype could be based on these UW fliers. 1-2 matches, 3-5 games.

Round 4 vs G/R/W. He takes a quick game one, but I manage to stall out game two with a 2 Souls Attendants start. He has a lot of Eldrazi spawn generation going so I gain something like 20 life off of them before I finish the game by getting Lord of Shatterskull Pass to level 6. We have only around 15 minutes left for game 3, but unfortunately I have to mull to six and start with a two-lander. I don't draw lands for the first 5-6 turns, but stay alive due to cheap removal and drawing the 2 Souls Attendants again. I finally start drawing lands and claw my way back, eventually managing to play a Conquering Manticore that can break through the sky and he's unable to answer it. 2-2 matches, 5-6 games.

I'm disappointed with my performance -- I think this has been my worst prerelease in a while. 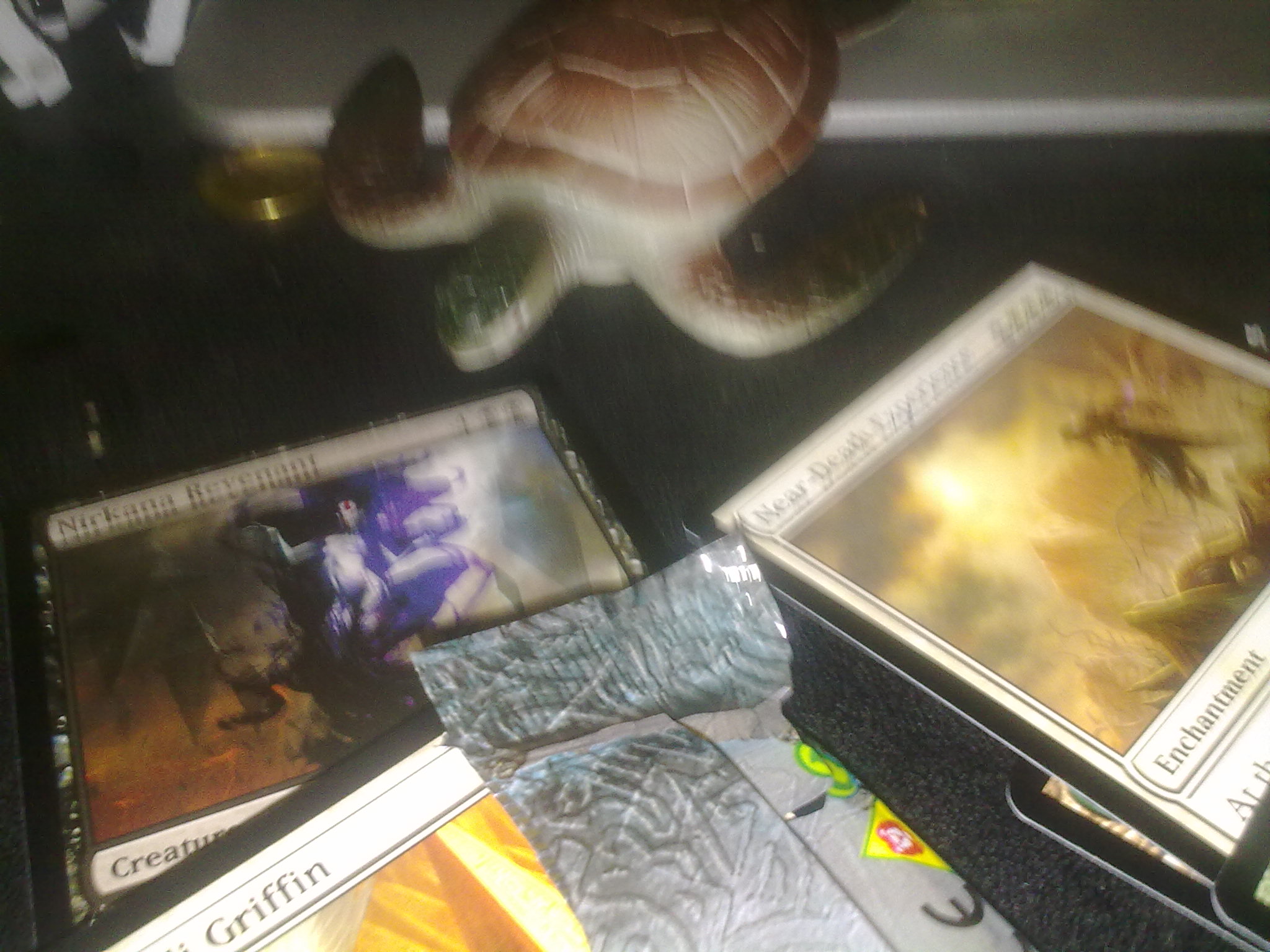 My 2-2 record wins me only two packs, where I got these not-so-awesome rares