The tournament was last Saturday, Aug 16 at Robinson's Galleria. I played the same deck as last week, except I had the following sideboard:

The extra removal was geared towards the kithkin matchup, which was unknown to me at the time. As is usual for me, I lacked playtesting; with the justification that these PTQS were my playtesting for the GP.

Tournament report follows! My memory is a bit sparse, so I'll gloss over some of the details.

Round 1: PWC Special vs GRBW Persist

I won this in three games. The opponent's deck was very rogue... tons of persist creatures: Murderous Redcap, Kitchen Finks, Twilight Shepherd... and Rendclaw Troll. Yeah, look it up.

Round 2: PWC Special vs Kithkin/Mirror Master

Ooh, my first Kithkin matchup with this deck! Let's see how I do. The following picture from my life total notes should explain it clearly: 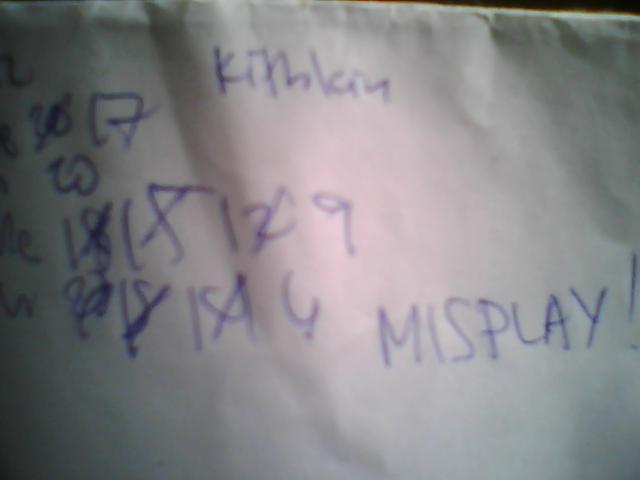 Long version: I lost the first game quite badly.

In the second game, I managed to stabilize and race. My army had been tapped low by Pollen Lullaby and the guys weren't going to untap. All I had was a Mirror Entity. He was on six and I was at nine (see the life totals in the image!) He had six spirit tokens and a random kithkin (I think it was a Meadowgrain).

So he plays Ajani, pumps 'em all and swings for the kill. I show my own Pollen Lullaby and we clash: He shows a land, I show... Cryptic Command! I've practically won; despite Ajani's vigilance, I could tap down his army with the Command (and bounce Ajani), and the effect from Pollen Lullaby still applies so they won't untap before my army gets another swing.

So he says done, I don't untap and draw my Cryptic Command. At this point, I have seven lands in play and an active Mirror Entity. I look at the life totals and see he's at six. Somehow, what goes through my head is that the Entity could kill him in one swing. So I did! And I immediately pumped for seven!

The spirit tokens were all of course, still quite untapped as I had not yet played the Cryptic Command. T_T

Wow, what a lapse. I had to write "MISPLAY" in all caps so that I never forget.

Round 3: PWC Special vs Demigod Red

I got lucky in both games 2 and 3 as he drew far too many land and couldn't finish me off.

While waiting for the next round, I did a few playtest games with Joel "gjarkeld" Bantilles playing Kithkin, so I could get a better feel for the matchup. I don't usually name drop here, pero gusto raw ni Joel mabanggit sa blog ko e!

Round 4: PWC Special vs Kithkin/Mirrormaster

Second time around, I have a better idea how to fight the matchup. The main defensive key in game one is the Banneret into Sower opening. Even if they kill the Sower, it's like you time walked them since they didn't do anything for a turn. If you do get to untap with the Sower, you're iin good shape. I won game one this way.

For game two, I sided into board control:

I pulled out the Reejereys because I didn't want him to be a Mirrorweave target. (More on this in round seven!)

I won game two in three quick swings according to my notes.

Round 5: PWC Special vs Justice Toast

I remember reading somewhere that Justice Toast was an underdog to Merfolk, so I wasn't too worried. I figured as long as I could stick a Bitterblossom or hit the Merfolk aggro engine, I should be fine. None of those things happened in two games!

Hay... I was thinking of dropping at this point, but I figured I needed more play experience for the GP (I don't think I'll be able to play in the last 2 Sunday GPTs)

I wasn't sure whether he was in fact playing Mirror Master since in game one he showed me only the Goldmeadow tapper and Rise of the Hobgoblins and a million plains. I boarded -2 Peppersmoke, +2 Hallowed Burial since I wasn't sure.

I won both games off the Banneret into Sower plan, since he didn't draw any Unmakes.

Round 7: PWC Special vs Kithkin yet again

I was expecting I would win round 5 since my tendency seems to be to gravitate towards a 5-2 record. Unluckily I was paired againt Joel (whom I mentioned above; dapat daw sabihin ko "Hayup yung si Joel!")

In game one he dropped me to below 10 quickly, but I stabilized a bit with a Bitterblossom. He was still at 20 and I had an entity, so I figured I needed to get a creature advantage and then entity him to death. I thought about it for a bit, then played a second Bitterblossom. I was hoping that either I would draw a Cryptic Command or he would have 1-2 turns without drawing creatures, in which case the Bitterblossom advantage would be enough. Unfortunately I went to as low as 2 and we still had equal counts and the next draw was a land, so I scooped for game two.

I went with the same board plan as round 4 here, bringing out the Reejereys.

In game two I hit every Kithkin with removal as soon as it game down, then went into Bitterblossom mode, and we were racing again. I eventually won due to winning a Pollen Lullaby clash.

In game three, he had a quick start and all I had were Bitterblossoms and Sage's Dousings. Even if had drawn a Sower to stop the tide, he had Moonglove Extract and Unmake in hand.

Joel commented that I should have boarded out the Dousings, and instead kept in the Reejereys (more creatures). In retrospect he was probably right, especially since I was on the draw.

I shook my fist at him and swore vendetta (not really), and then signed the match slip for my disappointing finish.

Right now, I'd say there's about a 60-70% chance I'll be playing this deck at the Grand Prix (even though I've been known to make deck switches at the last minute)! I went 2-2 against Kithkin today, and 2-1 against other decks. One of the Kithkin losses was arguably due to sheer stupidity/lack of focus, so there's definitely room for improvement there that should come with practice.

Now to figure out the QnT matchup...