I was playing UG shifters.

It was my first Block Constructed tourney.

I got my first ever sixth win in a tournament.

I made my first ever PTQ top 8.

Round 2 2-1 Win vs UW Morph/Maelstrom Djinn

Round 3 2-0 Win vs Monoblack Aggro

Round 6 2-0 Win vs Monoblue Control

The Round 1 Loss was due to terrible mistakes on my part, mostly because I put together the deck two days before the tournament with only 3 games of practice against a standard Dralnu deck. I was still too stupid to know I should leave an island open when playing a Shapeshifter face down.

For the quarterfinals loss, I couldn't think fo any play mistakes. However, my sideboard was stupid. All I could bring in were some Penumbra Spiders. I have some ideas for sideboard changes should I be able to play Block again.

The deck is solid, with game against both aggro and control. My decklist is here. It's actually a modification of the Top 8 Shifters deck from GP Montreal. I didn't have any Vensers, so I tossed in random stuff like Psionic Blasts and Call of the Herds.

Anyway, yeah I scrubbed out in the quarterfinals. At that point I was really tired and just wanted to go home. My deck also annoyed me in the last game. I cast all 3 foresees trying to find and answer to an 8/9 flying Tarmagoyf but I didn't find any. I picked up my prize for the top eight finish (seven packs)... I was a bit disappointed as well since I fought through so many rounds and only got seven packs, I was hoping maybe 10-12. Well, I've never had a top 8 finish before so maybe I was expecting more stuff :p

On my way home I was thinking about quitting Magic. I started to play "seriously" about a year ago, and all I have to show for it so far was a PTQ top 8. Playing Magic is so fucking hard. Let me rephrase: playing Magic is easy. Being good at Magic is so fucking hard. You need to pay attention to everything, you need to have the best deck, you need to know how to sideboard in all the matchups. At some point it stops being fun.

It's going to become harder since most of the guys I grew up playing the game with are either no longer playing or out of the country. And I'm too cheap to pay for more stuff on MTGO. Many of the Magic players in the office have migrated to playing WoW CCG.

Am I going to quit? Am I burned out?

Nah, that was just the tiredness talking. Magic is fun, despite the competitive pressure. I just need to be able to reconcile two things: I have to be the best and I can't lose sight of the fun..

Edit: Oh noes! My picture is on the internets!

Edit 2020: Above dead link recovered from archive.org. Image attached to this post. 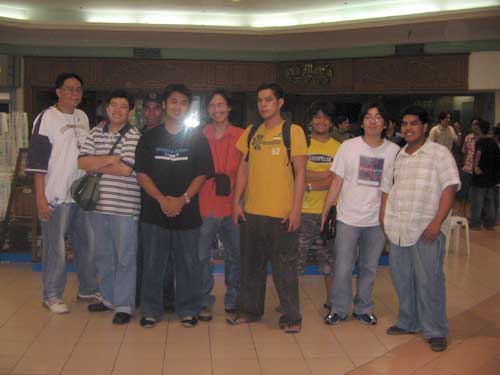